Home Google is Not Everything Baldwin High School’s Junior ROTC: Leadership Training for the Future

Diligence, discipline, and leadership are traits you acquire through intensive training either in your household, school or the military. These traits are commonly taught in many Filipino homes to train the younger generations to be more responsible and to help them face the real world as early as possible so they can adjust better in the society. Leadership is taught in schools to prepare students to speak in public and to gain better skills aside from core subjects.

A program at Henry Perrine Baldwin High School called Junior Reserve Officers’ Training Corps (JROTC) exists to guide students to become successful individuals and to become a better citizen under the military learning environment. Their mission and vision are to motivate people to become a better student and a citizen where this program successfully produced many successful individuals over the past years. The program teaches the students the values of LDRSHIP or loyalty, duty, respect, selfless duty, honor, integrity, and personal courage which help them change their outlook in life and urge them to make better choices in the future.

Rose Beatrice Aco, a junior at Baldwin High School, excels in both the JROTC Program and as a student overall. Rose has been in the military program for three years and has been acknowledged by her superiors for her Academic excellence and Leadership skills over the past years. “This program helped me to multi-task, be punctual, and motivated me to strive for the best,” Rose explained, stating her experience in the JROTC helped her shape who she is now. 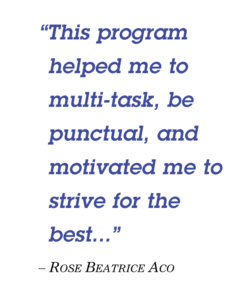 When Rose came to Maui in December of 2014 from the Philippines, she went to Baldwin High School and adjusted well in the new environment. Rose still had not decided on what classes to take so her friend suggested joining JROTC as a way to lose weight and to become physically fit. Rose learned many things and acquired many skills by entering the military program. She learned how to face her fears through rappelling from a high wall with only a rope to support her weight. Rose liked the rush of adrenaline it gave when she rappels from a high place and it became one of her favorite activities in JROTC. The program helped her to become physically fit through the extensive workout they do every week that requires strength, agility, endurance, and teamwork.
The military program also developed her leadership skills in which she formed a sense of responsibility to manage and guide the cadets well. She led her platoon to march and found effective ways to influence the cadets. Rose’s dedication helped her to rank as a Training and Operation Officer and achieve awards such as Academic Excellence (Grade 9–11), Superior Junior Cadet (Grade 10), Academic Bowl Participant (Grade 9–10), and Outstanding Youth Award given by the Maui Filipino Community Council (Grade 11) for her outstanding leadership, academic performance, and service to her school and community.

Rose plans to pursue nursing so she can give care and help to the growing number of people needing help and also to help secure a comfortable life for her family. With a clear goal in mind, she worked hard to achieve it and took classes such as Clinical Health, Human Physiology, and advanced courses at University of Hawai‘i Maui College. “Her ability to learn and teach other students is impressive as she is a model student in my class,” Rose’s chemistry teacher stated with a remark that she is a jovial person.

Jacqueline Agorilla is also a Junior at Baldwin High school and has been involved in the JROTC program for three years. Jacqueline joined the military program through an orientation that was presented back in middle school which made her curious as to what it was like to be a leader. “The JROTC does not feel like you are in class. We get to practice commands and marching,” Jacqueline explained. She is glad that they get to walk around and have fun during class and not sit down for hours. The program taught her to prioritize and manage her time wisely which helped her to become more efficient in her school work using her dream to be a nurse as a drive to do well.

Jacqueline is an outstanding student especially in academics with a grade point average of 3.8–4.0. She was given many academic recognitions by the school as well as the JROTC such as Honor Roll (Grade 9–11), Academic Excellence (Grade 9–11), and a Treasurer of the National Honor Society. She showed dedication to learning new things and not putting fear ahead of her as well as maintaining a good relationship with her peers. “She absorbs a lot of the lessons by being observant and always focuses on the task” Mrs. Oshiro, a Chemistry teacher in Baldwin expressed her thoughts on how Jacqueline does in her class and explained how she leads other students well in class. 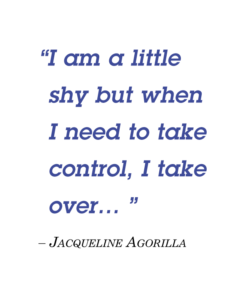 Jacqueline also showed her leadership skills through commanding a color guard during a ceremony and leading small groups. “I am a little shy but when I need to take control, I take over,” Jacqueline admitted. She prefers leading smaller groups because she can get to know each individual and focus on how to guide them better. She manages her group with consideration and creates a connection to spark better teamwork. Jacqueline also uses teamwork in a lot of sports and physical activities such as cheer, basketball and track where she practices her communication and synergy among her team. This shows that Jacqueline is a well-rounded individual with the help of her Army instructors. Owing to the fact that Jacqueline is highly respected by her instructors, she was ranked as a Corporal in the Bear Battalion because of her advanced skills in leadership, responsibility, and camaraderie among Cadets.

Through the Junior ROTC program, scholarships are given to passionate and exceptional students to help them with their future plans and career. Both Cadets are striving to get a military scholarship and other grants to pay for college and start a new chapter as an adult. Rose and Jacqueline are both excellent students that showed steady progress of learning and achievements with the counsel of their Army Instructor Sergeant Kahalekai and Army Instructor Simmerman that helped them become better versions of themselves. “I want them to continue what they are doing because I believe that whatever they do in life, they are going to be successful,” Sgt. Kahalekai’s message for Rose and Jacqueline in hopes of carrying, spreading, passing the military knowledge and skills to other people and move citizens to aid and serve the community.

This month’s guest columnist is Anastasha Aco, a sophomore at Baldwin High School who maintains a 4.0 grade point average. She won the second place for the Maui Fil-Am Heritage Festival Pinoy Artist Contest. She holds many leadership positions at Baldwin High School such as Historian of S.A.D.D. (Students Against Destructive Decisions) and will be Vice President of S.A.D.D. for the upcoming 2018–2019 school year. Anastasha likes to draw, sing, learn new things and aspires to become an architect.