Buy Local and Support Our Farmers

Buy Local and Support Our Farmers

I love food!
Everyone who follows me on Facebook or Instagram knows I love to post photos of food. I don’t get to cook a lot except for an occasional backyard bbq which has to include grilled tarong, sili, and okra that I buy from my neighborhood Filipino market. Oh yes, don’t forget the lasona to dip in the patis or shrimp fry bagoong. Sometimes my wife will cook some chicken paria or chicken marunggay and if we have a lot of time, she will cook some dinengdeng.

I’m sure everyone knows many of the fresh vegetables we buy are locally farmed by Filipino farmers—some with acres and acres of land or some, like my brother-in-law Jose Lampitoc, with smaller lots in Wailuku Country Estates (the former Wailuku Sugar macadamia nut farm land).

If you shop at JMA, Maui Greens, Pacific Fish Market, Paradise, Pukalani Superette, Rowena’s, Tamura’s, VIP, or Wailuku Seafood, the vegetables you buy were probably grown by a local Filipino farmer. If you shop at Costco, you don’t know where the vegetables came from.

“Local produce is better than mainland produce because the mainland produce spends one month in the chiller before distribution,” said Fernando Traje, owner of Traje Farm in Kula. Traje is originally from Aklan on the island of Panay. He was a student at the Aklan Agricultural College, majoring in Agriculture, when he came to Maui in 1988 as part of the Philippine Agricultural Training Program through the University of Hawai‘i. Traje’s cohort included nineteen students. They trained on Maui for two years and returned to the Philippines. A few years later, Traje was able to return to Maui after marrying his wife Evangeline.

Others in the Philippine Agricultural Training Program also returned to Maui after the program. Noel Escobedo is farming in Kula, selling strawberries, tomatoes, onions and other produce. Pepito Valdez is also farming in Kula, selling egg plant, zucchini, cucumbers, tomatoes, round onions and other produce. Arthur Latayada, who participated in the 1979 program returned to Maui in February 1981 on a fiancée visa and married his wife Sigrid. In 1983, Latayada opened his farm, a ½ acre lot in Kula where he began growing green onions and red onions. It would take Traje almost thirteen years before he opened his farm. He began working in the hotel industry in 1992 and started Traje Farm in Waikap&#363; in 2005, where he would farm bananas, long beans, and sweet potatoes.

“I wanted to make my own business,” said Traje. “I started farming on a part-time basis while I continued working at Kealani Fairmont.” In 2010, Traje moved his farm to the Kula Agricultural Park, where he leases sixty acres, growing round onions, zucchini, egg plant, long beans, bananas, and taro. “I moved because someone gave up their lease and I bought the lease from them,” explained Traje. “I was part-time for two years and then became full-time. I only wanted to concentrate on farming. It was hard to have two jobs.”

Like Traje, Latayada moved to a larger farm. He now leases fifteen acres from the Von Tempsky family where he has grown green onions, tomatoes, pumpkin, white squash, bittermelon, and taro. Latayada continues farming on a part-time basis (30 hours/week) while being an employee with the County of Maui Parks Department for the past thirteen years. “For me, farming is a gamble. Sometimes you win, sometimes you lose,” says Latayada. “I was brought up as a farmer when I was small. I really enjoy farming. It also helps me to pay off my bills.”

But it’s not easy to be a farmer. Silvestre Tumbaga of Tumbaga Enterprises LLC dba Syl’s Produce speaks to the many challenges: “Since starting our farm in 1987, we saw so many changes in the farming industry. Farming was enjoyable then because it was cheaper to operate. Produce was easier to grow because there weren’t as many diseases and pests.” According to Tumbaga, “The greatest challenge we experience is the weather, disease, marketing competition, increasing costs, and labor availability, to name a few. We overcome it by patiently working and never giving up even when things don’t work out the way it should. We always work hard to put out the best quality products.”

Traje, like other farmers, has been assisted by the availability of USDA loans, which helped him to expand and buy machinery. He now has twelve farm tractors and a number of trucks and cargo vans. “It was easier to get a USDA loan and it really helps,” he said.

Not all Filipino farmers are in Kula. Robert Mata of Oby’s Farm LLC is in Waikap&#363;, across from the Kahili Golf Course, and is approximately 75 acres. Mata grows okra, papaya, long beans, cucumbers, and bittermelon.

Tumbaga grows green beans, broccoli, broccolini, cilantro, cucumbers, eggplants, and sugar cane at their farm in the Kula Agricultural Park. These are sold at farmers markets, wholesalers, restaurants, stores, and to other farmer’s market vendors.

In November 2018, Traje opened his Traje Farmers Market on Lower Main Street at the old Minit Stop site. He and five other vendors were at TJ’s in the old Kahului Shopping Center for about five years. “I wanted to sell directly,” Traje says. “I also wanted to sell some offgrade products—not only the A grade because I have to throw away the off-grade products which was a waste.” 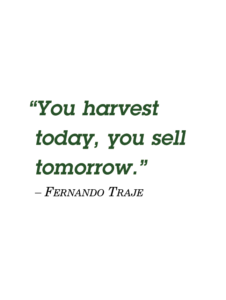 Despite the challenges, these farmers continue to thrive and bring food to our tables to fill our stomachs. “I like to help people by feeding them food,” says Traje. Traje really believes in the freshness of local produce. “You harvest today, you sell tomorrow.”

Alfredo Evangelista grew up in Paukūkalo, where his family raised a few chickens, ducks, goats, and pigs. He doesn’t have a green thumb and has failed at planting a papaya tree and a kalamunggay tree in their Waikapū backyard. His wife Basilia is a little more successful and has been able to rescue their calamansi tree.