Celebrating July 4th–Freedom is Not Free 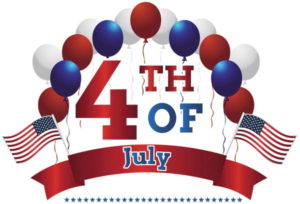 On July 4, 1776, the Continental Congress, representing 13 colonies, declared its freedom from British governance, and issued the Declaration of Independence.

“We hold these truths to be self-evident, that all men are created equal, that they are endowed by their Creator with certain unalienable Rights, that among these are Life, Liberty and the pursuit of Happiness.” This is perhaps the most famous sentence in The Declaration. (The Constitution of the United States of America would be signed on September 17, 1787 and the first ten amendments to the Constitution, commonly called the “Bill of Rights” would be adopted on December 15, 1791.)

Two hundred forty two years later, America continues to celebrate the Fourth of July as a national holiday. “To celebrate Independence Day of the United States as a nation, where you are an individual, speaks volumes to me. I can be a free thinker, not having to bow down to nobility but to have the opportunity to have upward mobility,” declared Kulamanu Batangan, a millennial. “It reinforces the value of my ability to pursue my own personal dreams.”

“Living in the USA, we have certain freedoms and on this holiday we remember that we are enjoying all that we are privileged to have,” said Mistylove Carino Apo. “It has a lot to do with our soldiers. We have to give them more respect. We should all be excited to celebrate this special day.”

For veterans, the Fourth of July has a very special meaning: “July 4th, Independence Day, inspired me to serve in the military,” said Lucio Calina. “I was in the U.S. Air Force for twenty-three years and went to Iraq for Operation Enduring Freedom. Back in Alaska, I was a National Guardsman, a reservist, as supervisor of the helicopter maintenance crew that did both military and civilian air rescues.”

“It is a time to salute the military,” responded businessman Leon Bolosan. “In the Philippines, we celebrate the Independence Day of America and the Philippines. Every year our families had parties and got to see each other, talk, and eat and laugh a lot. Friends come with more food and all the kids played together.”

For many immigrants, the Fourth of July has a special meaning: “It means the celebration of the birth of the United States that eventually became the land of opportunity, the land of safety, where many people from different countries came to make a new life, including me,” stated attorney Benjamin Acob, as he was about to step into the courthouse in Wailuku.

All Americans are connected by the common thread of citizenship in a nation that is bound not by race or religion but by the shared values of freedom, liberty and equality. The nation’s history shows a long legacy of welcome to new arrivals from around the world. There is broad recognition that immigrants have contributed greatly to defining and shaping the country in its evolution to becoming a leader among modern democratic nations, and also looked to as the beacon of hope for the people in many places, wanting the same freedoms for which thousands have fought to preserve. Almost 250 years after America’s national birth, naturalized citizens still play an important role in promoting the meaning of democracy.

And yes, here in Hawai‘i, many celebrate the Fourth of July by going to the beach, having a picnic, and eating some hotdogs and hamburgers or some ono local food like sashimi, adobo, kal-bi, lau lau, and noodles. “From the time I was very young, July 4th was a family affair. We always looked forward to this holiday. Every year my father made lechon,” recalled Loretta Balicanta. “We had fireworks and singing together with others in the neighborhood, at our house or the community center near us.”

Jeny Bissell cheerfully chatted about the way she and her husband were putting out the flags for Memorial Day, remembering that Memorial Day is connected to Independence Day, “which always gives us a sense of hope and being kind to one another. Too often we are forgetting our humanity. We have faith, hope, love and kindness, learning to care for each other, bringing hope for all of us.”

Over the last month, several conversations with veterans and their family members have made clear to me the important observation that most Americans have lost the connection between July 4th, Independence Day, and the events that led to the Declaration of Independence in 1776. For instance, at Maui’s 2018 Memorial Day Ceremony, held at the Makawao Veterans Cemetery, the over-capacity audience shared the unveiling of the Vietnam Monument, a project that took several years to accomplish. And at last month’s Barrio Fiesta, a segment of the Saturday programs included the Veterans Memorial Service.

Earlier in Honolulu, on May 6th, World War II Filipino Veterans were presented the Congressional Gold Medal by Major General Antonio M. Taguba, U.S. Army Retired, who personally gave a medal to each veteran or family member in attendance. The awardees waited for 75 years to receive their medals, following the many years of supportive work from the late U.S. Senators Daniel Inouye and Daniel Akaka, and more recently, the sponsors of the initial legislation in both houses of Congress with the eventual passage of S 1555 and HR 2737 that led to the passage of the Filipino Veterans of World War II Congressional Gold Medal Act of 2015, signed as Public Law 144-265 by President Barack Obama on December 14, 2016.

Being part of this once-in-a-lifetime event gave me the privilege of watching the Veterans’ faces which were full of pride and their families who smiled joyfully in this historic moment. Throughout the nearly three-hour ceremony, many tears streamed as the images emerged on three giant screens in the Hilton Hawaiian Coral Ballroom, the only venue that could accommodate the almost 1,000 guests, moved a week earlier from the Fil-Com Center with its lesser seating capacity. My escort, who came in full Class A U.S. Marine regalia, was Major Armenio Salaguinto from Maui, now living in Kapolei on O‘ahu. We were guests at the table of AARP, for which General Taguba previously served as President of the national organization. As one of a few formal military events in my experience, it was heartwarming to visit at the various tables of dignitaries, including President Obama’s sister Maya Soetoro-Ng, whom I have known since she came to Maui to promote her brother’s first presidential candidacy, and her husband Konrad Ng at the next table, as well as Governor Ige and former governors nearby, and many more high ranking military officers in their most resplendent uniforms.

It is Maui’s Memorial Day event that provided the best context from which to think about July 4th as Independence Day. This year’s theme was “Fallen Yet Not Forgotten” for which each speaker gave related, very personal perspectives. Even the Posting and Retiring of Colors by the Hawai‘i Army National Guard was received with more profound meaning. A new perspective came from Carole Hickerson, a transplant from California who joined us from O‘ahu, to speak about “Memorial Day… Its Meaning to an MIA Wife.” Her story describes the years of waiting to learn of the whereabouts of her husband, a soldier in Vietnam. In her words, “When you get a group of frustrated women together, you know something will happen!” She and other wives in the same predicament organized to demand information from Congress and the powers that be, with a happy ending for her efforts. Congresswoman Tulsi Gabbard spoke proudly of wearing her uniform as a Major in the Army National Guard, having served tours of duty in the Middle East. The most urgent message from her is that we never forget the service and ultimate sacrifice of the soldiers honored every year, and that we openly show gratitude for those who have served, many of whom are now seeking employment whether or not they have been wounded in war, and most of all, that we give visible support to our soldiers who are currently on tours of duty across the planet, fighting to preserve our freedoms and the lives of people unable to fight for themselves.

“Freedom is not free” is best understood by members of the U.S. Armed Forces, whose memories include fallen brothers and sisters, also those still healing from visible and invisible wounds encountered in combat, and constant worry over the young service members in battles today or on non-combat duty across America and the world. The cost of war is measured in lives lost and bodies forever changed while on duty, as well as the billions of dollars spent in our defense. As one of the speakers reminded us, “Most Americans are celebrating this holiday at family picnics or the super sales at the big box stores.” Only a few are sharing the sad memories of their loved ones who have passed or still in the healing process. When I asked my retired veteran friend, “How can we help more Americans to remember why we have a July 4th celebration every year?” he replied “You know what, we need to think harder on that and come up with more ways to educate the public about the meaning of July 4th.”

Throughout its brief history, the United States continues to be the envy of many in the world who do not enjoy the basic freedoms that Americans exercise daily and mostly take for granted. The Founding Fathers created a government that protects the nation (national freedom), that offers fair representation before the law and equal participation in government (political freedom), while giving citizens personal liberty (individual freedom). It is commonly accepted by Americans that national and political freedoms cannot exist without individual freedom.

Given a historical context for July 4th will perhaps provide the highest and best reason to celebrate with our families and friends, and also give us pause, to remember with gratitude the people we have known who gave their lives for us to live free, or the soldiers of today who choose to sacrifice some of their youthful years to preserve those freedoms we enjoy daily.