Fiesta With a Ring!

Harvests from the earth’s bounty are shared to celebrate a loud and colorful festival influenced by the Spanish settlers.

In any culture, the word Fiesta is synonymous to Celebration. Filipinos like to have fiestas to celebrate Birthdays, Promotions, Graduation, Weddings, and Life Successes to name a few. Often times, Lechon is the focal point and is served as a symbol of celebration and thanksgiving, among other favorite delicacies. Town Fiestas honoring Patron Saints date back during the the Spanish era when Christianity was introduced to The Pearl of the Orient Seas, named The Philippines. Fiestas were coincided to honor Christian Holidays specific to every town, which means there’s got to be thousands of Patron Saints that are honored throughout the Philippines. Harvests from the earth’s bounty are shared to celebrate a loud and colorful festival influenced by the Spanish settlers. It’s about food, music, and lots of fun! One of my many favorites that my family always seem to have on our table is Kare-Kare. My sister Benilda inspired me to create a recipe as I have attempted to follow hers with a little bit of my personality. Please enjoy! I chose to feature this dish classically made with peanut butter but I wanted to substitute it with roasted almond butter instead, as a personal preference. Also, I tend to favor Lamb shanks as it is much leaner compared to the traditional use of oxtail. 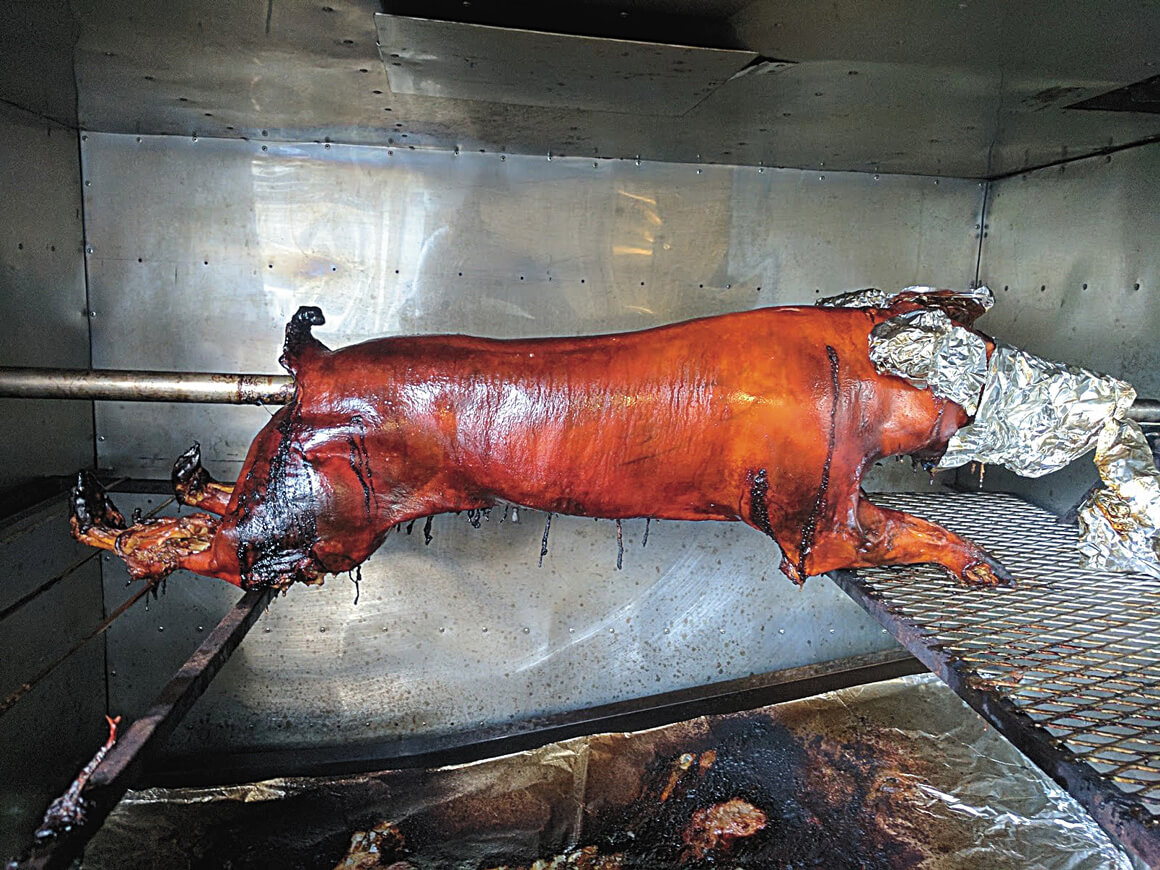 Lechon is often the focal point during fiestas, and is served as a symbol of celebration and thanksgiving, among other favorite delicacies. Shown here is a lechon with the head wrapped in foil. Wrapping the head in foil yields a different heating result in the face and head area of the lechon.
Photo: Jake Belmonte 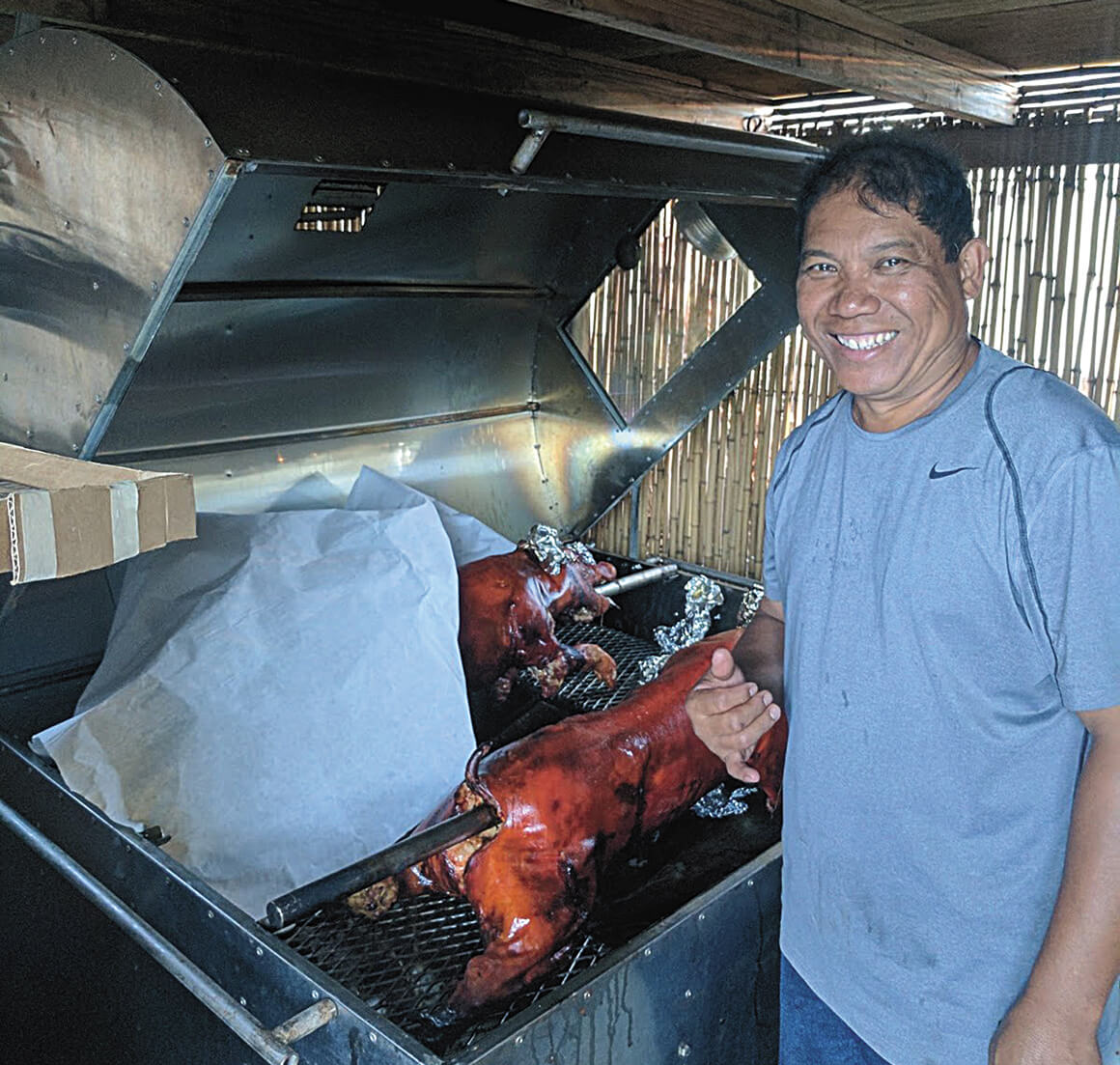 Bobby Sales, owner of Plantation Grindz in Kahului proudly flashes the shaka sign while he prepares his isle-renowned lechon on a spit. “Maui’s main source for your Lechon cravings!”
Photo: Jake Belmonte

I have contributed this recipe (shown below) to my good friend, Chef Adam Tabura’s cookbook, A Filipino Kitchen (shown above), that you can find at your local supermarkets. Included in this book are lots of simple and easy-to-make home-style recipes you can follow for your next fiesta.

Chef Joaquin ‘Jake’ Belmonte Jr. is an alumni and a Culinary Lecturer at the University of Hawai‘i Maui College, Culinary Arts Program. Chef Jake is also a Maui HS graduate and he has worked extensively in the Food & Beverage operation at Fairmont Kea Lani Resort in Wailea. He currently is the Vice President of the Maui Filipino Chamber of Commerce; Facilitator of Hawai‘i National Great Teachers Seminar; Assistant Scoutmaster of Troop 68; and an active member of the American Culinary Federation. Chef Jake was recognized by the Hawai‘i Hospitality Magazine as one of the 2008 Top 10 Rising Chefs of Hawai‘i Under 40 and was the 2009 Chef Representative of the Hawai‘i Visitor and Convention Bureau’s West Coast Marketing Campaign. Happily married with two children, Mr. Belmonte is also a Small Business Owner and Operator of Maui Lifestyle Healthy Choice, a premier healthy vending company. You may follow his blog  or email him at lifestylechefmaui@gmail.com, and connect professionally at linkedin.