If We Could Vote …

With elections beginning, the voices of political figures are loud as ever. As pressing issues like the COVID-19, environmental protection and the state of the economy are being addressed, the community is watching to see which candidates they deem fit to suit their needs. Though current times makes for a tense political climate, it also makes for an opportunity for members of the community to speak out for what they care about and want leaders and representatives to keep in mind. The youth of this age is no exception.

Today’s youth are becoming increasingly involved in various social media platforms such as Twitter, Instagram, and TikTok. But as social media is on the rise, the political engagement of Gen Z seems to rise along with it. A gold mine of activism and self-expression, social media provides youth with a platform to inform themselves of the current state of the country and develop their own political beliefs. Twitter, among other social media sites, has been a pivotal tool in politics as political figures showcase their views for the whole world to see. Introduced to the world of politics and given the chance to develop their own beliefs, do the younger ranks of the community wish they were given the chance to bring light to the issues they believe should be addressed most? Who do the youth think are fit to represent them? Three students answer these questions.

Senior Kyson Calibuso, a member of his school’s student government, describes the role of politics in his life. Though he admits he is not totally versed in the world of politics, Calibuso says that social media has played a huge role in what he does know. “Social media is usually the only outlet where youth gets their news concerning politics and the government. Also, it is where other youth members share their opinions on certain issues and topics that circulate around our government and their international relations,” he says.

Calibuso also credits what he knows about government to what he has learned in school. “What has helped me learn more about our governmental system was the Participation in Democracy class but the school year was cut short due to COVID-19, so I was not able to learn the class to its full content.” When it comes to staying in tune with current political events, Calibuso agrees students should stay aware of what is happening in today’s political climate and be vocal about what issues they care about. “I believe it is important for youth to stay in tune with politics because we are the next generation. We should practice voicing our views so that we are able to stay in touch with how our rights are, and what we can do as the next generation to make the U.S. a better country.” 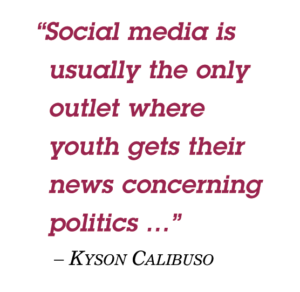 When looking at what kind of figure he’d trust to represent their people, Calibuso says “What I would find appealing about a campaign of a candidate is how they address certain problems because I am always interested in seeing what they advocate for. As leaders, they should be able to not only gather problems and state their opinions but they should also be able to create solutions and sort out ideas.” Calibuso describes his own ideal candidate as “Someone who is kind and looks out for their people before themself. They would be someone who doesn’t fit the ‘politically correct’ stereotype. They should voice their views without second thoughts. Lastly, they would look at all sorts of policies because there is never only one problem.”

With the voting age set at 18, Calibuso believes “People under the age of 18 should have the option to vote in the U.S., preferably 16 being the minimum. When it comes to politics, everyone in the nation should be represented. Although many citizens under the age of 18 might not be at the mental capacity to make decisions like voting, those 16 and over should still have a say, since teens can be highly opinionated, especially if it concerns them.”

Upcoming Junior Faith Soliven shares her take on youth partaking in politics. Like Calibuso, she also believes that citizens aged at 16 are viable for voting. “My opinion on the voting age in the U.S. is that it should possibly lower to 16 at the very least.” Soliven owes this opinion to her hope students can learn about political ideologies in a school setting. “If our educational system makes unbiased efforts to educate our youth about political leadership, lowering the voting age should also be appropriate. It is responsible to make sure our youth are educated enough to understand how they should decide to vote, through unbiasedness.”

When voicing ideas through social media comes to mind Soliven believes “If social media towards youth is used wisely and effectively, it can definitely encourage involvement. If social media and corporations allow for youth to use their voices and speak up about changes they need, youth involvement will become crucial.” Soliven offers her personal account from fellow student journalists that have inspired her to explore politics. “From personal experience, I felt motivated to learn more about politics, from watching my high school friends from PBS Student Reporting Labs doing a live journalism panel in Washington D.C. I felt relieved to know that many adult audience members were concerned about how youth can be motivated to learn about problems and politics in the world,” Soliven says. 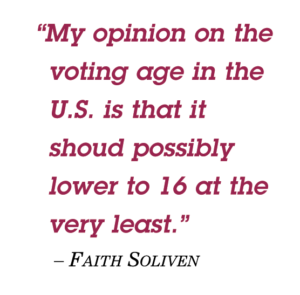 Now considering herself fairly educated in the sphere of politics, Soliven is knowledgeable in the areas she cares about. “I feel like I am educated on politics to the extent of whether I want to learn more or not. It varies from really educated to not at all. I look for unbiased resources online such as PBS and the history of different candidates. I would also feed the need to educate myself more, the closer I would get to the voting age.”

Set on what she believes in, Soliven shows what she would like to see her ideal candidate address. “I would want my ideal candidate to address how to fix the economy for the equity of every class, solve environmental issues that are affordable and have a greater gain than loss, address college tuition and debt, and creating a reliable and better structured educational system that brings greater value out of students. I want them to carry themselves through integrity, empathy, and kindness, as they create change.”

Apart from policy itself, Soliven also places importance on the character of a candidate “As someone who is a member of this world’s youth, I find it refreshing when a candidate decides to wholeheartedly respect their competition and is completely honest with both society and themself. If someone purely has their intentions to put the people first, without discrimination or hate, I find that appealing.”

Now Senior Marigold Baldonado takes the time to share what she thinks about youth in politics. Contrary to Calibuso and Soliven, Baldonado has no objection to the current voting age but she also recognizes lowering the age is a popular opinion among other students. “Having the voting age be 18 is reasonable. For America, when a citizen turns 18 they are no longer (usually) under the responsibility of their guardians. It’s the age in which they have to start adulting and maturing into their own person. Lowering the voting age is what some of my peers want to happen.” A supporter of youth voices, Baldonado owes her opinion to many people below 18 not experienced enough in the world of politics to make thoughtful decisions regarding it. “Although I believe it is important to have the voices of our generation heard, many people I know are not educated enough in politics and those who run the government. With the voting age being at 18 it gives people who are underage to actually evaluate their decisions and learn more about the topics and candidates they care about.”

Baldonado looks back at what exposed her to politics, social media. “In my experience, social media has been able to open up my eyes to politics not only in the U.S. but around the world. Many celebrities feel it is their responsibility to spread as much information about the things they care about due to their large audiences. That can be the black lives matter movement, supporting the LGBTQ+ community, preventing global warming, etc.” Baldonado sees social media as a powerful means of spreading awareness surrounding otherwise marginalized topics while staying true to the reality of social media. “Since their followings are so huge, information spreads. It goes from a celebrity circle to one’s own community circle. Plus, for this generation, we’re all about trends and keeping up with what’s trendy. With that in mind, many people start hashtags or posts so that people can repost and participate. We no longer have the excuse of being uninformed when the information is right there in our own two hands. Social media is great because it gives us the opportunity to educate ourselves. Sometimes it’s not correct information, but the internet is also there to put us in our place and to tell us when we are in the wrong and how we can grow from there.”

Baldonado makes it known what kind of candidate the youth of today would want. “I would like a candidate to talk for the youth. I understand most candidates, especially presidential candidates, tend to shape their campaigns to please everyone. Yet to my knowledge no candidate expresses the importance of our generation and how much impact we have with our voices. We have opinions and as future leaders and working-class, our position in politics should have a greater impact.”

With this age’s youth placing politics at a much higher pedestal than ever before, it is a crucial time for political figures to broaden their audiences. As information becomes more accessible to all members of society, students are taking the responsibility to become active members of their community and educate themselves on the issues they are passionate about. The rising popularity of various platforms is making for a new age of politics and is changing the face of political campaigns right before our very eyes. With a tap of a button, youth can see what is happening in the world they are living in and develop their own opinions surrounding it. It is up to the political figures of today to meet the needs of every facet of society.

Google® Is Not Everything is a monthly column authored by high school students. The title of the column emphasizes that education is more than just googling a topic. Google® is a registered trademark. This month’s guest columnist is Alexis Joy Viloria, a Junior at Maui High School. She is the founder and President of Maui High’s SaberScribes, their journalism club. Alexis is also a committed member of HOSA-Future Health Professional as the Secondary Representative of the Hawai‘i HOSA Executive Council and a state gold medalist. Alexis hopes to one day become a Pediatric Physician. She is the daughter of Alex and Juvy Viloria.