I was fortunate to go on a trip to Europe for my Advanced Placement European History class for Baldwin High School. I had heard of the trip in my junior year and told my parents about it.

These trips are held each year and anyone can go as long as they pay the amount which can be upwards of about $4,000. It was a bit costly as I had to pay for the trip and have spending money but the website allows for a donation page to be created after registering.

A friend of mine went on the trip last year and said the trip was very fun and eventful and worth the costly price.

There were six of us including our teacher, Mr. Scott Clarke. We met with other students from Littlerock High School in California. We went on a five-hour flight from Maui to San Francisco. Then after a nine-hour layover, we flew a long twelve hours to Germany. We landed at Frankfurt airport and waited with our tour director for the other group of students and chaperones from California. After waiting for about two to three hours, we met with only five of the thirty that made their connecting flight from Paris.

The others arrived later that night, so we boarded the bus to the city of Rothenburg. 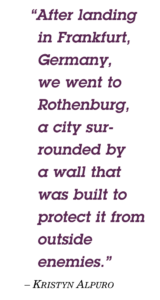 After landing in Frankfurt, Germany, we went to Rothenburg, a city surrounded by a wall that was built to protect it from outside enemies.

Rothenburg is a very medieval town with houses and buildings that do not look like the modern styles in America.

On the next day, we visited the Neuschwanstein Castle, a 19th century Romanesque Revival palace on a rugged hill above the village of Hohenschwangau.

While walking to the castle, it snowed!

We were all very excited as some of us haven’t seen snow before, which was the highlight of the trip for me and possibly others as well.

We took a walking tour of Munich and saw the former royal palace of the German monarchs.

We also went to Marienplatz, the central square in the city of Munich.

We visited the BMW luxurious cars and motorcycles as well at the BMW museum.

Our visit to Dachau left us solemn. Dachau was the first Nazi concentration camp and was in operation for 12 years, holding political prisoners.

After Dachau, we left Germany and headed to Italy.

We visited St. Mark’s Basilica, the cathedral church of the Roman Catholic Archdiocese of Venice.

Our group also took a gondola ride through the city of Venice.

There are no roads in Venice, only walkways and canals. Venice is a floating island in Italy that can only be reached by water taxis.

Everyone has to ride a gondola or water taxis or walk around the city.

And we finally ate authentic Italian food in Venice, like cannoli, pizza, pasta, and gelato.

Our next stop was Lucerne, Switzerland. We went to the Swiss Alps, a mountain range in Switzerland. We played in the snow, made snowmen and fed the crows that stop for a rest at the top of the mountains.

After the Swiss Alps, we walked the cobblestone streets, exploring the city of Lucerne.

There is a chapel bridge in Lucerne, over the River Reuss, with murals painted on the ceilings as you walk across the bridge. Murals can also be seen throughout the city, on buildings and in the Bourbaki Panorama Lucerne, a museum housing an 1881 cylindrical painting that depicts the Franco-Prussian War.

We returned to Germany and visited the town of Heidelberg where we saw the Heidelberg Castle, a ruin and landmark of Heidelberg which towers over the town. It was our last stop in Germany before heading back to the U.S.

Having another school from California on the trip was actually very interesting and fun. We didn’t mingle as much for the first day or two because we were all tired but the California kids were very eager to talk to us Maui kids and learn our local slang.

Going to Europe and learning about the people and cities was definitely a culture shock for many of us who went on the trip. My trip was truly a trip of a lifetime and I am thankful I was able to go. 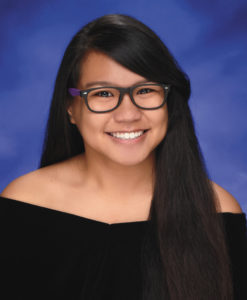 Google® Is Not Everything is a monthly column authored by high school students. The title of the column emphasizes that education is more than just googling a topic. Google® is a registered trademark. This month’s guest columnist is Kristyn Alpuro, a senior at H.P. Baldwin High School. She is a two-year member of Aloha Club and a three-year member of photo club. Kristyn is also a production assistant and photographer at All Pure Media, LLC as well as the photographer for musician Willie K. She is the eldest daughter of Jesse and Lyn Alpuro.