Filipinos are a religious bunch. After the Easter celebration in the spring, Filipinos gather in their hometown for their town fiesta–usually on the feast of the town’s patron saint. Folks from the city or ili, return back to their barrio to reconnect with families and friends.

Here in Hawai‘i, it’s no different. Filipinos statewide celebrate the month of May as Fiesta month. Although there are certain Philippine fiestas that predate the Spanish conquest of the Philippines, many of the fiestas have become Filipino Roman Catholic feasts.

In the Philippines, Flores de Mayo, translated as “Flowers of May,” is celebrated during the whole month of May. Flores de Mayo is a religious festival in honor of Mary, the mother of Jesus, and marked with offerings of flowers to the Virgin Mary.

On the last day of the Flores de Mayo, a religious procession—the Santa Cruzan—is held. The Santa Cruzan depicts the finding of the Holy Cross by Queen Helena, the mother of the Roman Emperor Constantine, who ended the persecution of Christians. The Flores de Mayo is celebrated throughout the Philippines including Batangas, Bicol, the Ilocos regions, and even the Western Visayas.
While some of Hawai‘i’s Filipinos try to be politically correct and downplay the Fiesta’s religious connections, one cannot escape the religious history of the Fiesta, especially when it’s celebrated in May.

The start of
the Barrio Fiesta

Maui’s Barrio Fiesta started as a one-day affair (10 a.m. to 6 p.m.) on Sunday, May 31, 1970, as part of the Maui Filipino Community Council’s Fiesta Filipina, whose general chairperson was the late Raquel “Nancy” Andres.

Andres and her co-chairperson, Greg Peros, with Maui Filipino Community Council president Paul Pladera providing oversight, set out to, as written by Andres, “bring Philippine culture and portray Philippine life in all its forms: traditional dances, enchanting music, and festive atmosphere. What are featured during the Fiesta give others an insight of what the homeland is like—full of gaiety, action, and color. For truly Hawai‘i, as the melting pot, is composed of many cultures and Filipinos here in Maui should all be proud to give their contribution to the fullest extent.”

“Manang Nancy wanted to spread the Filipino culture. She was the brains behind the Barrio Fiesta and asked me to be part of it,” said Peros. “I was fresh out of the U.S. Army and I wanted to contribute to the Filipino community, which was at a crossroads with the influx of many immigrants from the Philippines. We wanted to share our rich culture with everyone, including the local Filipinos.”

The event was advertised as a “Filipino Barrio Fiesta” and was co-sponsored by the State Foundation on Culture and the Arts. The committee purchased two advertisements (on page A2 of the May 23 and May 27, 1970 issues of the Maui News) and listed the events which would be held:

The May 27, 1970 issue of The Maui News reported “A Barrio Fiesta is a celebration offering thanks to the patron saint of a particular ‘barrio’ or district for a bountiful harvest. It is a week long celebration in which there are sports events for the young and old.” A demonstration of roasting pig (lechon) Filipino style, was being undertaken by the Filipino Cultural Club, according to the Maui News.

The first Barrio Fiesta was held at the War Memorial, on the grounds next to the War Memorial pool. Shirley Evangelista was crowned the Miss Barrio Fiesta and yes, there was a cock fighting demonstration. Participating organizations included Council of Political Action (COPA), Filipino Cultural Club, Kahului Catholic Club, and the 6th–11th Increment Filipino Association, among others.

By 1974, the Barrio Fiesta became a three day affair and the competition between the participating organizations increased. Elaborate booths depicting bahay kubos were created, with art displays in an entire room of each booth, the Miss Barrio Fiesta contestants raised thousands of dollars, and several Filipino folk dance troupes participated in a dance competition.
The fiestas in the 1960s

But it was the desire to bring all unit organizations of the Maui Filipino Community Council together that was the impetus behind the Barrio Fiesta. Andres, who arrived on Maui in 1969 after marrying Rev. Justo R. Andres, the associate rector of Good Shepherd Church, was a member of the Saniatan ti Amianan Philippine Folk Dance troupe that toured California and Hawai‘i in 1964. Andres, who was a talented musician, became involved in Maui’s Filipino community and had bright ideas but knew she needed the support of the old-timers. “It was Nancy’s idea to start the Barrio Fiesta. She developed the concept and because she was new on Maui, she worked through some old timers to get it done,” said Agrifina Cabebe, who would collaborate with Andres on many projects and activities.

Over the years, however, Maui’s miniature nipa huts disappeared for a number of reasons—the fire code, the inability to harvest bamboo, and the lost art of nipa hut-building that the Sakadas brought with them. In 2006, the year of the Filipino Centennial, the booths from the Maui Fair were used and bamboo façades were placed over the booths. “We wanted to make the 2006 celebration a very grand affair” said Florante Garcia, who chaired the Barrio Fiesta in 2006. “So we rented the booths from the Maui Fair and brought in a singer from the Philippines. The following year, we continued with the fair booths and the food vendors were happy with it.” The old timers said it was nice but not the same as the good old days. For tax reasons, in 2006, the Barrio Fiesta was transferred from the Maui Filipino Community Council to Binhi at Ani, which held a 501 (c)(3) tax exempt status. In 2012, the Barrio Fiesta would be reduced from a three day affair to a two day affair.

But the costs of staging the Barrio Fiesta—rental of facilities, booths, tents, stage, etc.—led the Binhi at Ani Board of Directors to make a difficult decision. “We analyzed our expenses and found that we would save approximately $5,000 in expenses if we moved the Barrio Fiesta,” said Garcia, who became president of Binhi at Ani in 2014. So in 2016, the location of the Barrio Fiesta moved from the War Memorial soccer field to the Binhi at Ani Center in Kahului and held on only one day. To some, the 2016 Barrio Fiesta was a bit disjointed—with the entertainment inside the hall and the food booths outside—and spacing was not at its best. But financially, it made sense. “In 2016, our revenues were positive,” explained Garcia “compared to significant losses in 2014 and 2015, so it was the correct decision by the Binhi at Ani board.”

A renewed
emphasis on culture

“This year, the Board of Directors of Binhi at Ani is very excited about the Barrio Fiesta,” said Nora Cabanilla Takushi, the new president of Binhi at Ani. “We have reconfigured the layout so the main stage will be outside so those who are purchasing food from the food booths can also enjoy the program.”
Hungry folks will be able to feast (or take home) adobo, balut, bangus (marinated boneless), cascaron, chow fun, lumpia, miki, pansit, and more. Participating organizations include Alcalanians, Good Shepherd Episcopal Church, Ilocos Surian, Lahaina Filipino Catholic Club, Magsingal, and Maui High School ELL. Along with the food booths, there will be a farmers market ready to sell fresh vegetables and produce.

“The committee has worked hard to develop a great program,” said Takushi. “The Barrio Fiesta will begin on Friday at 5 p.m. with the Opening Ceremonies, followed by a procession with the queens, a Flores de Mayo presentation, opening remarks, our Guest Speaker, Lt. Governor Shan Tsutsui, and remarks by Mayor Alan Arakawa.” Friday night’s entertainment will feature Good Shepherd Episcopal Church Filipino Folk Dance troupe, an International Fashion Show presented by Madelyne Pascua, the International Housekeeping Awards, entertainment by hotel employees, the introduction of the Little Miss Barrio Fiesta participants, and a Karaoke contest, with $300.00 awarded to the first place winner.

“On Saturday, the Barrio Fiesta opens at 10 a.m. and the morning entertainment will begin with Tekniqlingz from O‘ahu, followed by a Barrio Fiesta costume contest, with $100 for first place and $50 for second place for both males and females. The Veterans Memorial Service will be held at 12:00 noon with the Grease Pole contest at 1 p.m. The Grease Pole contest winner will receive $300, with other qualifying participants sharing in the $200-plus pot,” said Takushi. “The Little Miss Barrio Fiesta will begin at 3 p.m., and the evening’s entertainment will feature Dance International Foundation, Escrima, the crowning of the 2017 Miss Barrio Fiesta, the presentation of the 2017 Binhi at Ani scholarship awards, Tekniqlingz, and Zumba.”

“But the committee is very excited about what’s dubbed as ‘The Barrio Fiesta Experience’,” said Takushi. “Inside the Binhi hall, those who enter will be exposed to the various cultural groups within the Philippines. The ‘Barrio Fiesta Experience’ will feature a replica of a Bahay Kubo, built by the Bahay Kubo Heritage Foundation, which is the organization leading the restoration efforts of the Bahay Kubo at the Heritage Gardens in Kepaniwai. And there will be seven cultural villages from some of the regions/provinces in the Philippines.”

Those regions and the coordinators are:

“We’re very excited about this new feature of the Barrio Fiesta,” said Takushi,” and we couldn’t do it without our Barrio Fiesta Experience sponsors: HMSA, Monsanto, Alexander & Baldwin Foundation, McDonalds, and Philippine Airlines, who will be donating a number of airfares to the Philippines.”
Towards the

In just two years, the Barrio Fiesta will be 50 years old. Though it has faced many challenges, externally and internally, the Barrio Fiesta has survived. Maui’s diverse community, including Filipino immigrants and local Filipinos, appreciates the multi-faceted culture that only a nation with 7,000 islands and over 70 dialects can offer. The Barrio Fiesta—the longest running Filipino Fiesta in the United States—continues to be the standard of sharing the rich Filipino culture. 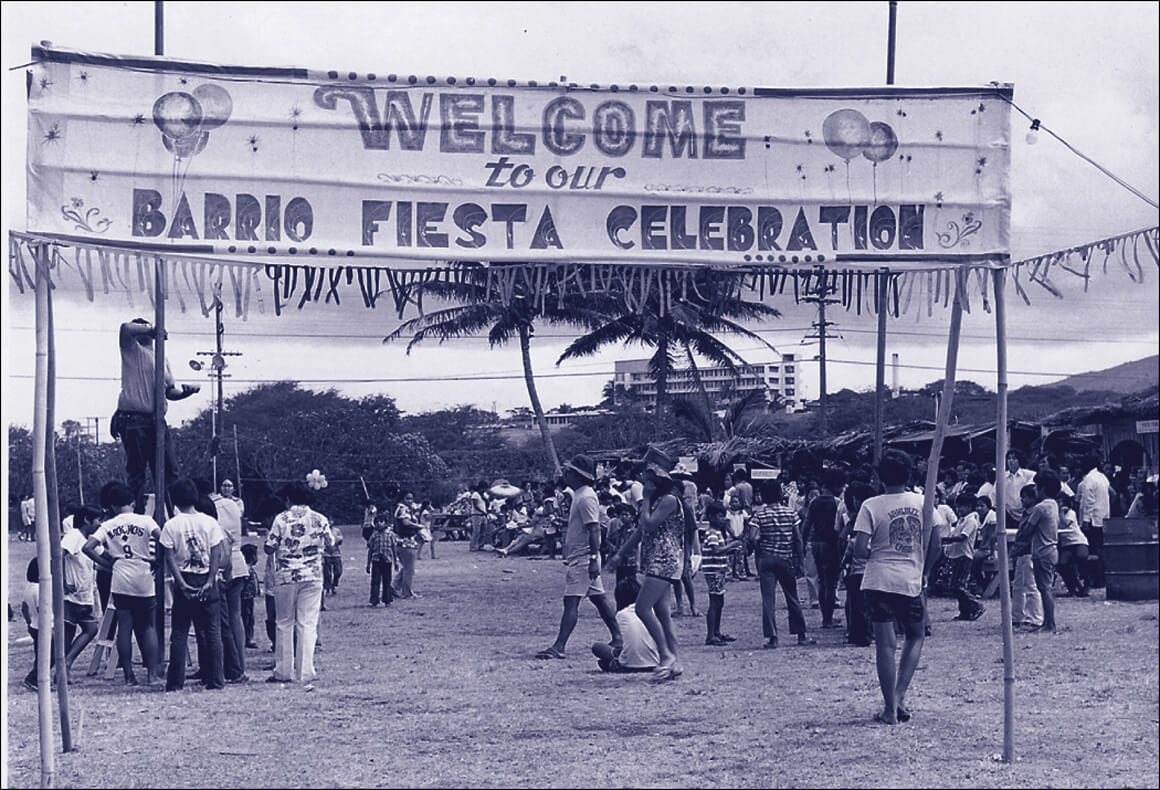 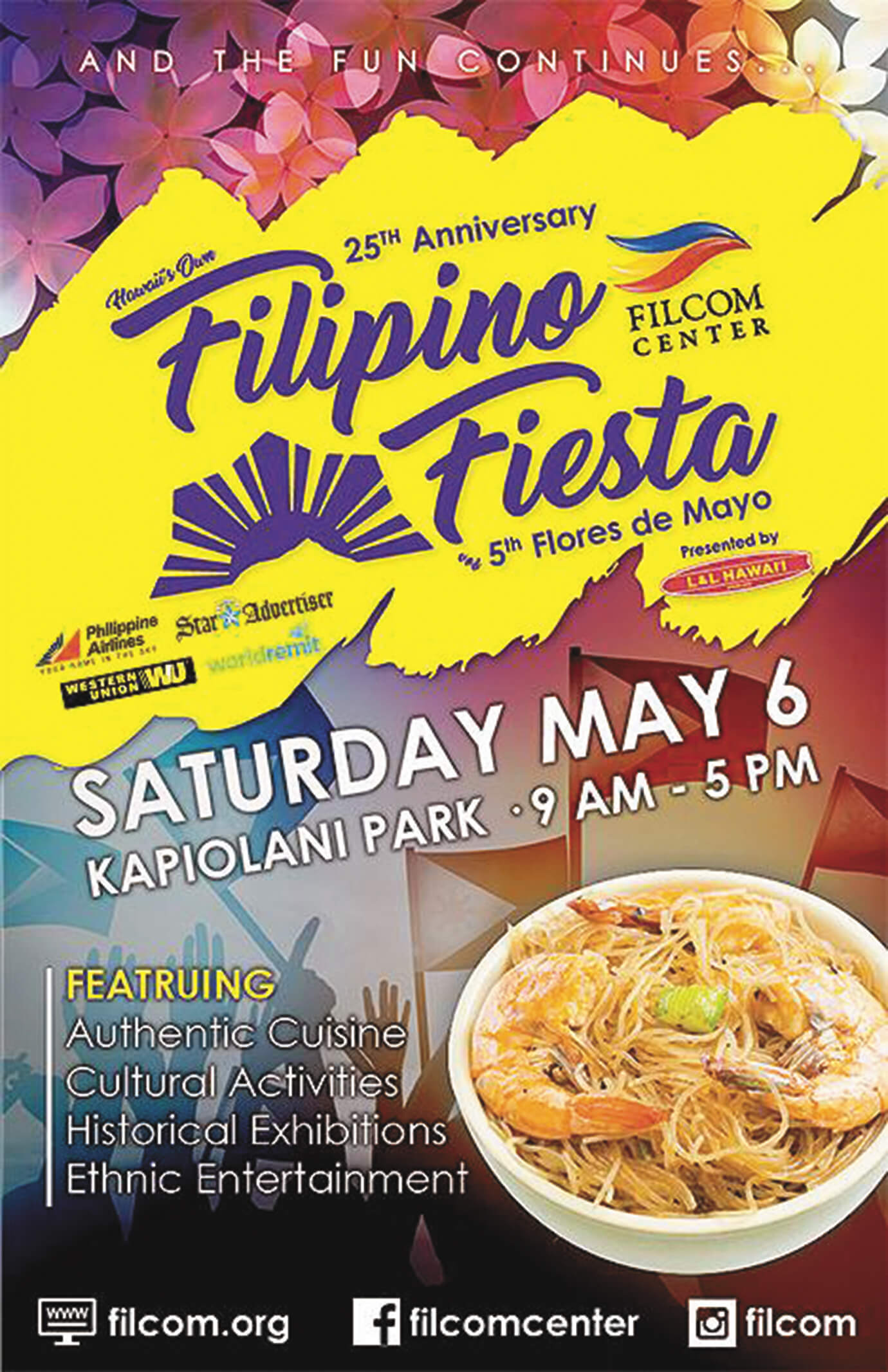 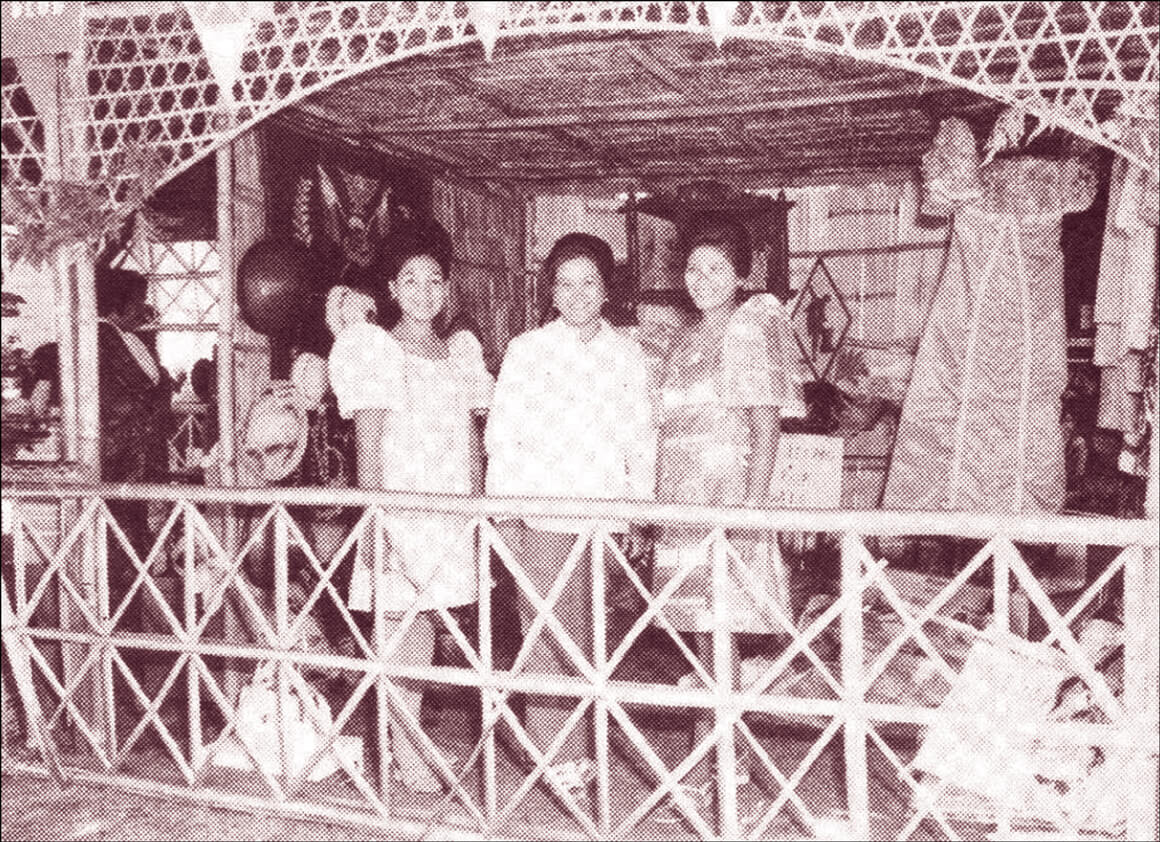 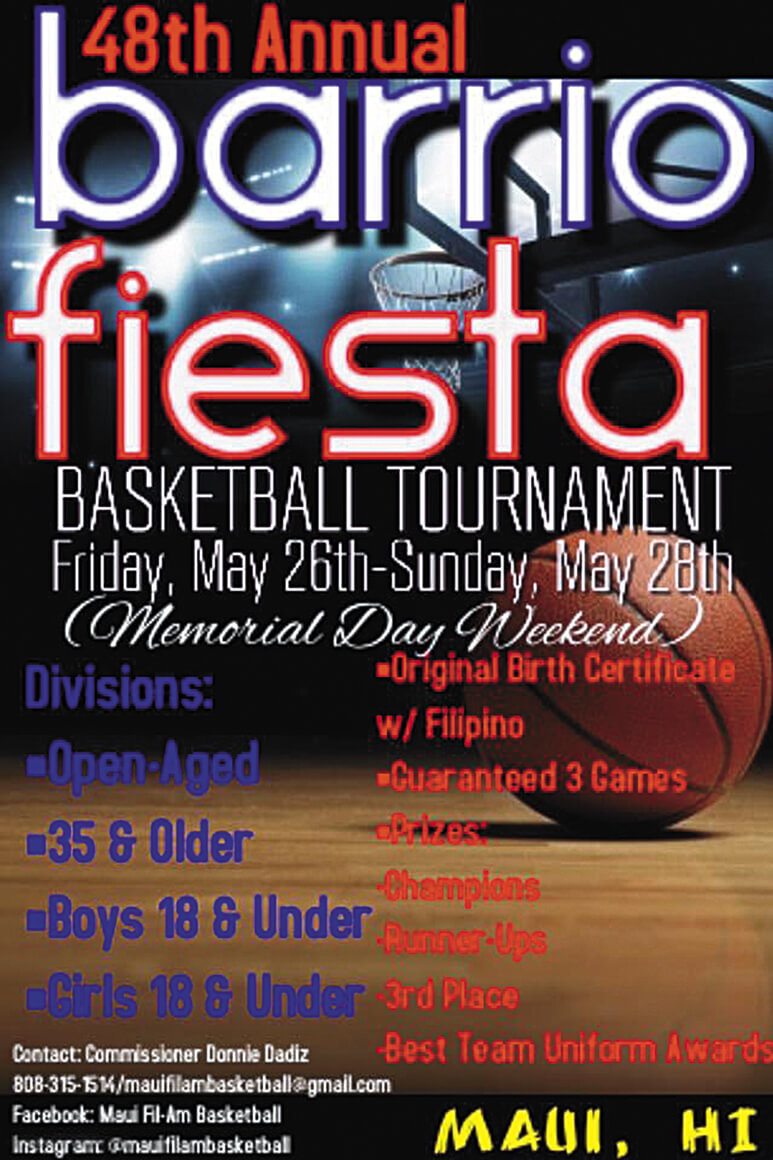 Basketball Tournament info for the 48th Barrio Fiesta on Maui. 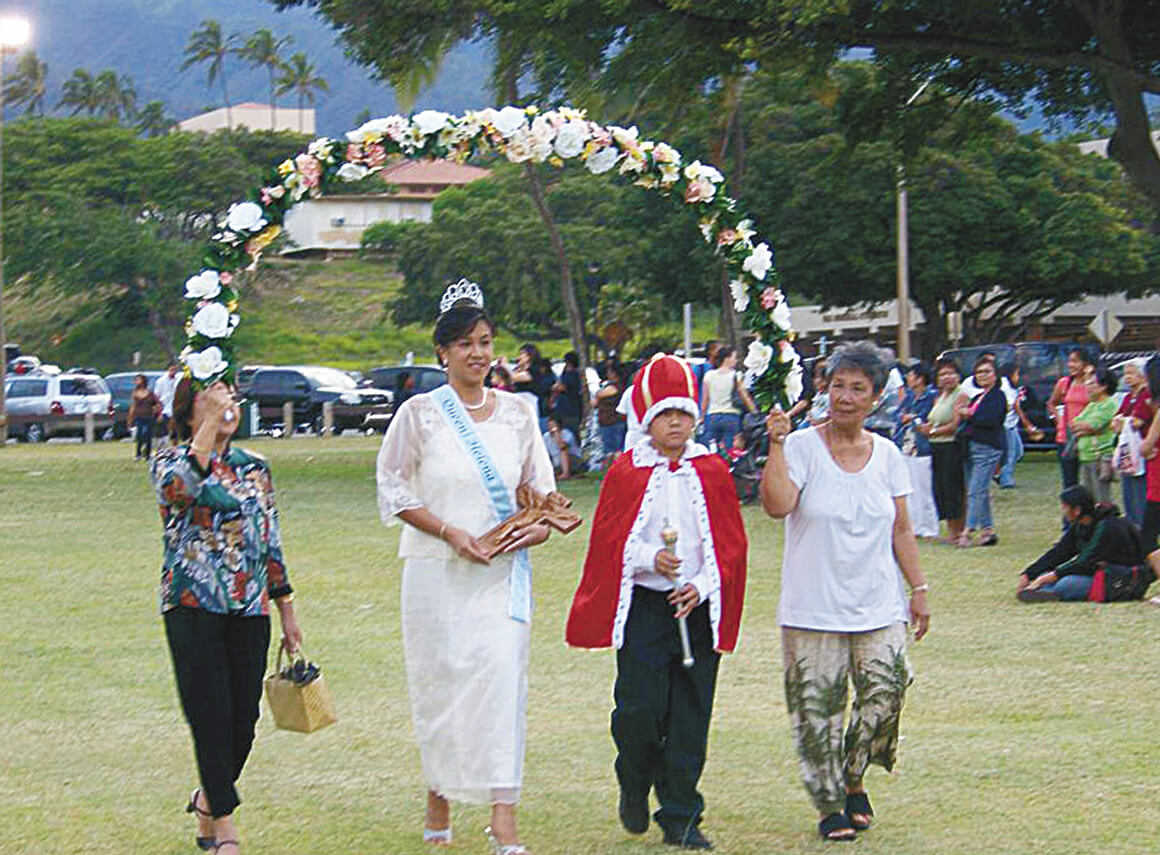 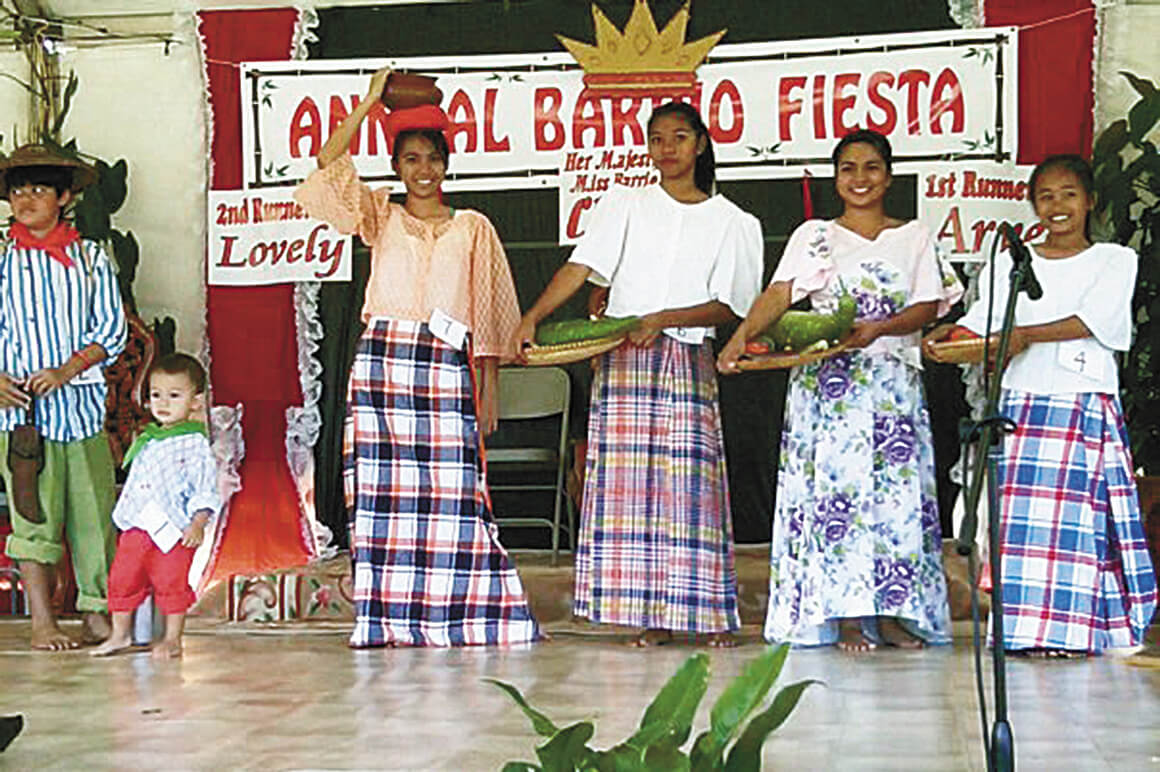 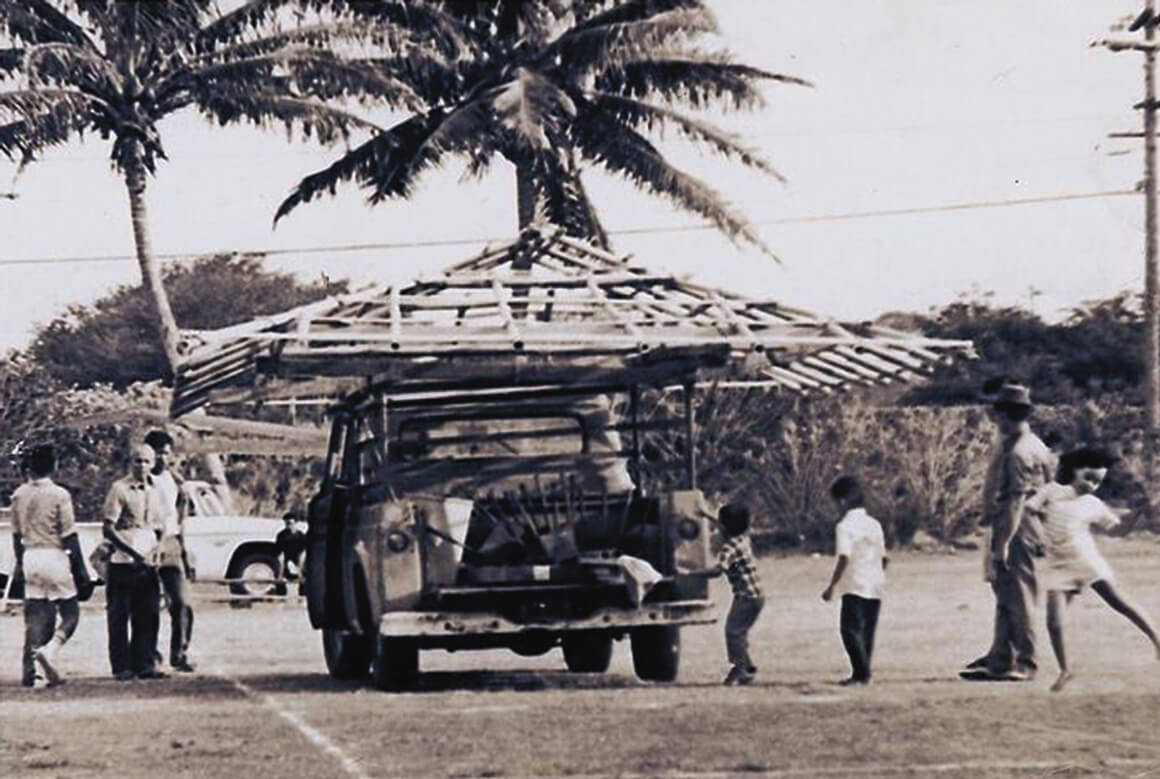 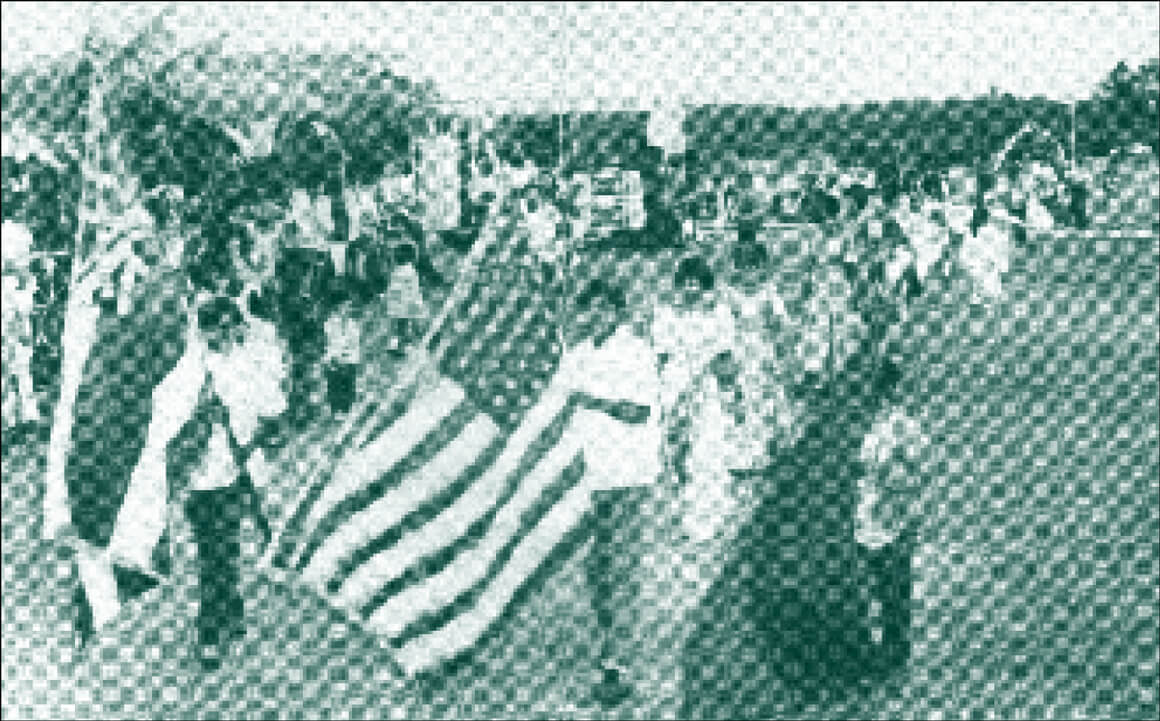 These participants pose for a shot during the 1970 Barrio Fiesta. Photo courtesy Maui Filipino Community Council

Many games for the kids were a feature at the 1970 Barrio Fiesta. Photo courtesy Maui Filipino Community Council 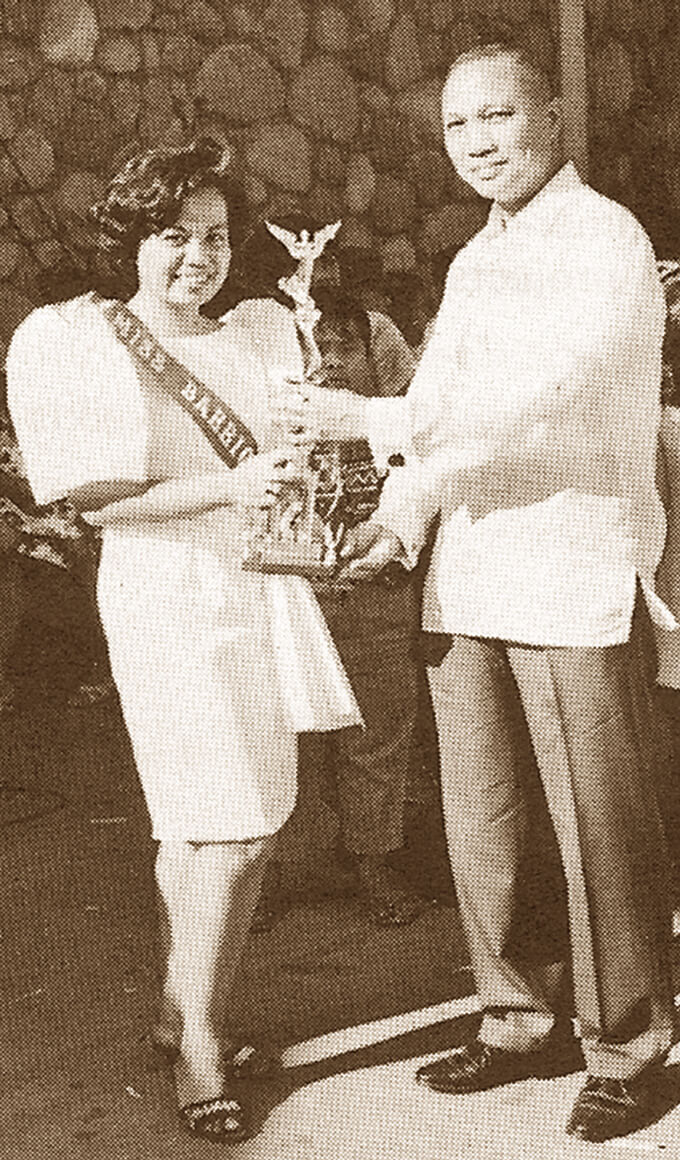 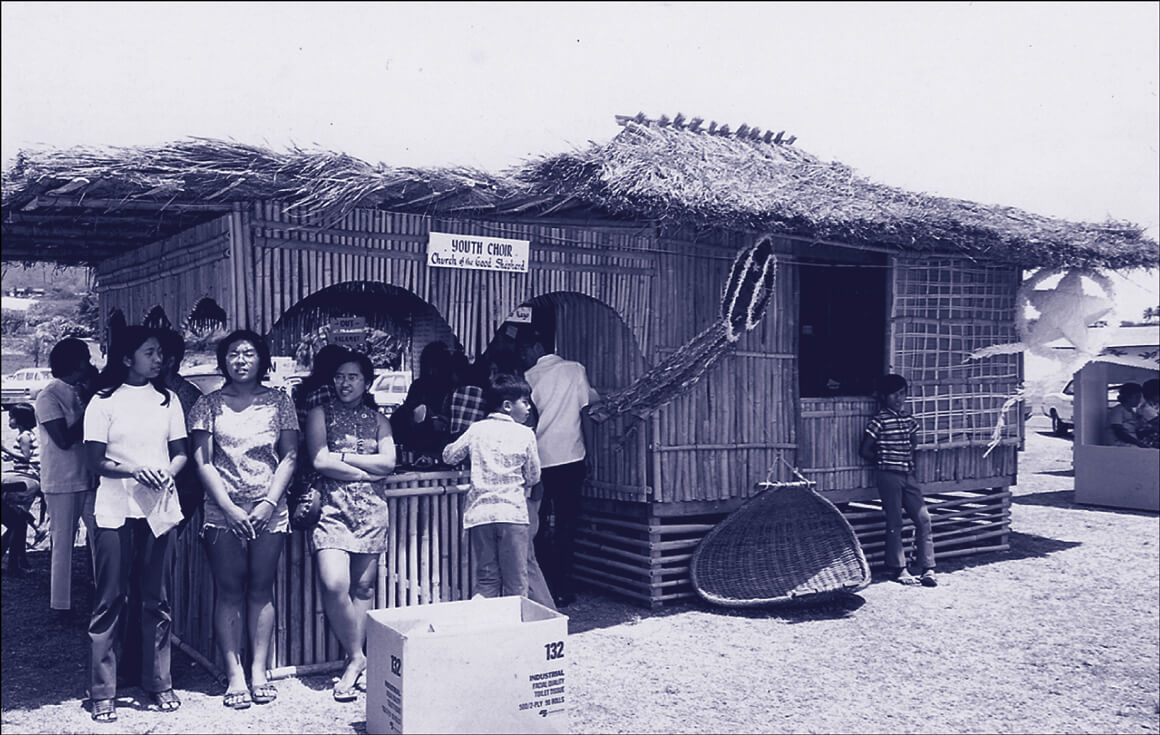 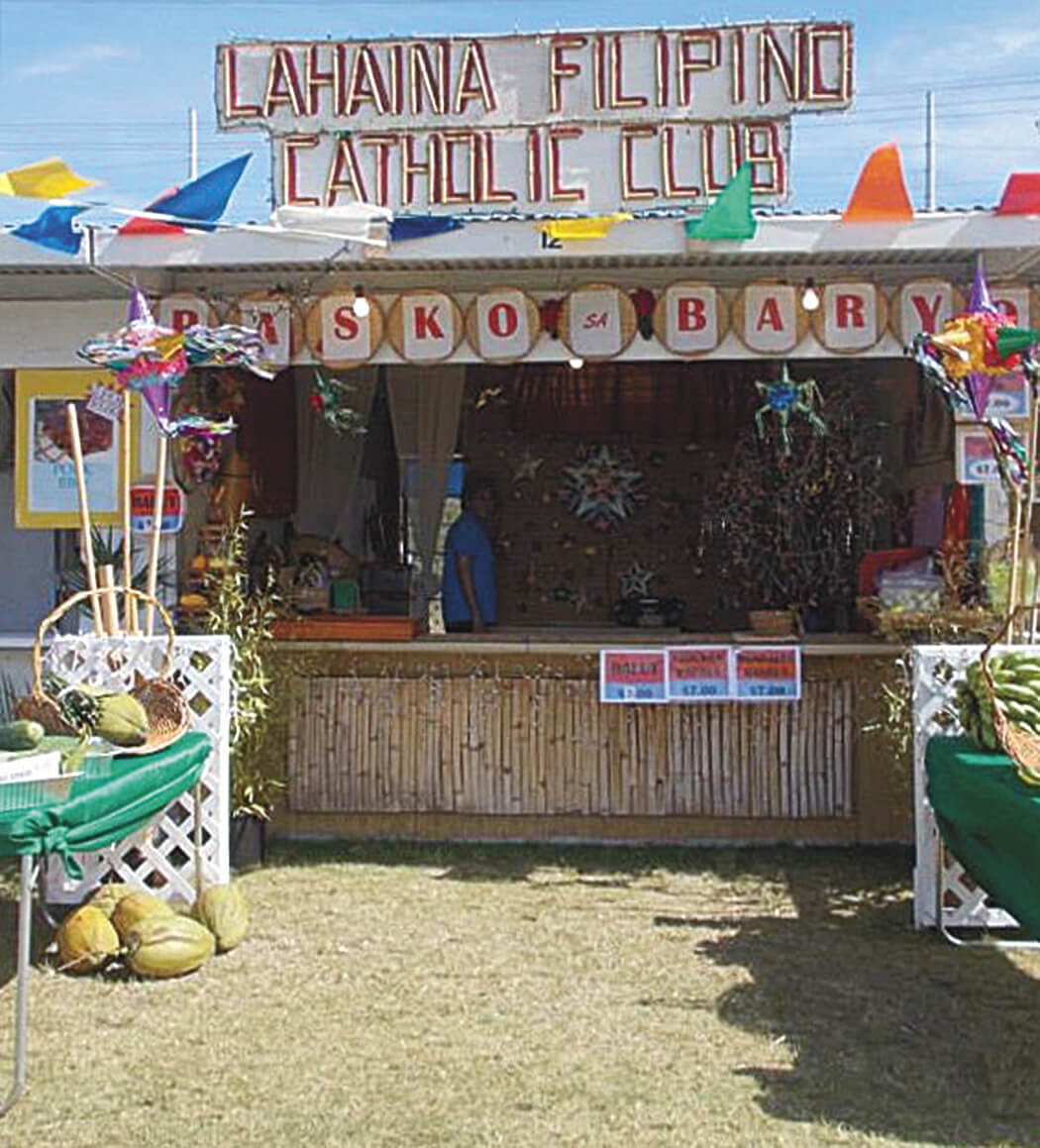 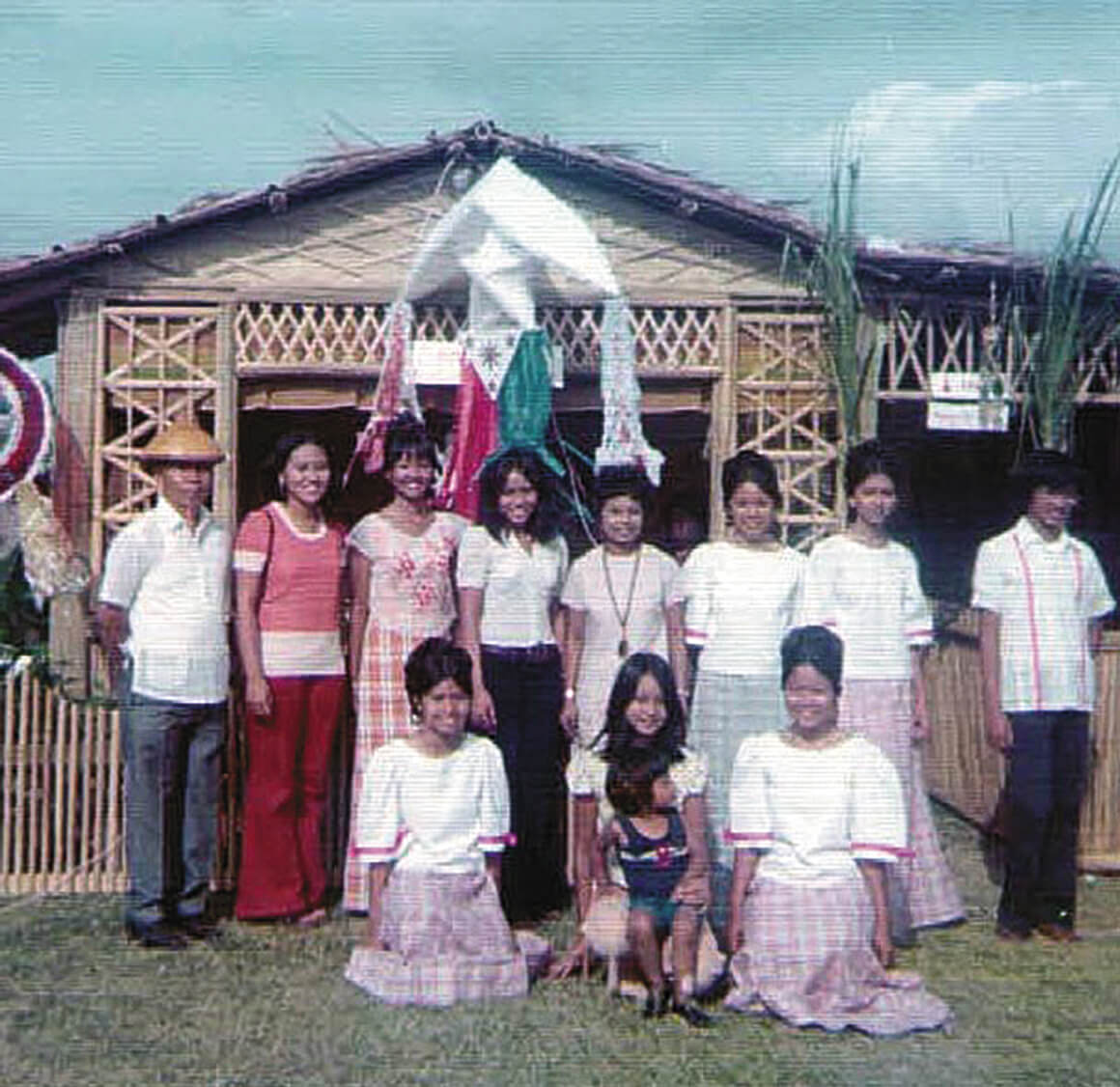