“It’s Our Turn!”—This was the phrase that we heard repeatedly during Jollibee’s Grand Opening on January 24th. Our Art Director, Lawrence and I was there, among the crowds, cheering on and happy exclaiming “It’s Our Turn!” Oh, what a fun day it was!

It is a little difficult for me to write this article not because I don’t know what to say but because I have so much to share! There are so many angels I can share from. I had to pause and tell myself to simply share my story. After all, this is what this column is about … “talk story” or as we say in the Philippines, it is kwentu-kwentuhan.

I first heard about Jollibee coming to Maui through my friend Kit Furukawa’s Instagram. That was back in 2017. She said she was looking at Maui Marketplace for a lease and she saw on the plat map a Smiling Bee . That smiling bee looked very familiar and it was indeed the Jollibee Bee! Since then, I had been waiting! I grew up eating Jollibee in the Philippines. Their original store in Cubao, Quezon City was close to where I lived. I knew there were several Jollibee stores on O‘ahu but I rarely fly to O‘ahu so I missed Jollibee so much when I moved here to Maui!

Back to the Grand Opening, it was a huge success! Approximately 300 fans claimed their places in line at the new Kahului store even before the doors officially opened. (The store continued welcoming customers until late into the evening, ultimately serving around 5,000 customers on its first day of business.)

First-customer-in-line Frank Barbosa claimed his place before 5 p.m. on January 23—16 hours before the official opening. The 52-year-old father-of-two who resides in the Kīhei region of Maui said he was first introduced to Jollibee through his kids, whose love for the brand was what initially encouraged him to give it a try. During his first-time eating Jollibee last April at the Ala Moana store—one of four Jollibee locations on the island of O‘ahu—he quickly understood what the hype was all about. 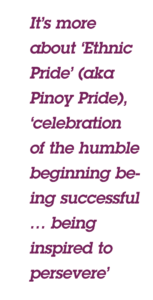 Speaking of “hype,” one of my non-Filipino friends commented on our Facebook page that she felt Jollibee Maui’s Grand Opening Celebration was too much hype for a fast food chain. Needless to say, she didn’t think it was worth it. Gently and calmly, I replied to her comment with this:
“The thing is, it’s more than just the food. As many probably have noticed, it’s mostly Filipinos who are in line. Maybe about 98-percent. Yes we like Chickenjoy and Jolly Spaghetti, but that’s not really the driving force of this hype. It’s more about ‘Ethnic Pride’ (aka Pinoy Pride), ‘celebration of the humble beginning being successful … being inspired to persevere’ Add to that the nostalgia and sentimental feelings … all is what the hype is about. I know for a non-Filipino, it is hard to understand, and I don’t expect you to. Just sharing my point of view.”

My friend Kit Furukawa said “The craze is a bit hard to explain and a bit hard to understand, but for those who do, like you (comment was directed to me), here’s a virtual affirmation nod and warm hug.”

Beth Dela Cruz, president of the Philippine Brands Group with the Jollibee Foods Corp. in North America, said “We realize that for many who have not returned home to the Philippines for a while, Jollibee is a comforting presence that feels like home.” I agree with her. That’s how I feel about Jollibee when I first entered its store on Maui.

As I mentioned earlier, I have a lot to share about Jollibee … but I’ll stop here for now. And now my question is “Have you been to Jollibee Maui yet?” If not, what are you waiting for?
Jollibee Maui marks the brand’s 41st location in the U.S. as the chain progresses in its mission to grow to 150 stores in the United States by 2023. Other areas of focus in 2020 include Florida, New Jersey, New York, Maryland, Nevada, Texas and California.