Congratulations to all graduates. Way to go Class of 2019! Warmest congratulations to our daughters, Vanessa Kate Erin and Angeline Joy on your graduation. You amazed us with your accomplishments! It took a lot of hard work to reach this goal. You had to do it, whether you felt like it or not. I hope you feel great about what you’ve accomplished and I hope you’ll continue to be a person who does things that are worthwhile and important in life to not only make us proud but also make yourselves proud too. May you always dare to do great things in your lives. We love you kiddos.

June 1st this year is the official first day of summer for most students living on Maui. Summer is a time where family trips are booked, endless beach weekends, and let’s not forget the heat. It must have been 93 degrees outside today with no breeze. Even so, I can remember so many great memories were made during my summer breaks and with it officially starting, it’s off to the races to create more magical moments. This summer, we will have our first whole family vacation. Four generations, 20+ people in a six bedroom, three story house. We will see if we survive each other. I look forward to the making of great memories with the family.

Last time, Michael and Angel were in the car headed to West Maui. Let’s see what happens this week.

A brief pause as Angel turns to Michael who is now flush red and clinching the steering wheel with the grip of death, looking straight ahead. Angel bursts into a laugh, and wipes her eyes.

After listening to a few pop songs on the radio, Angel blurbs out “Michael, I need to change the station, Ariana Grande is killing me,” then fiddles with the radio stations. Soon, they pull into the ProPark parking lot near Lahaina Foodland and Michael backs his sasakyan (car) into a parking stall. As soon as he puts the shifter in “P”, Angel screams “Ahh, I love this kanta (song)!”

Startled, Michael looks over at Angel who reaches for the volume knob, cranks it up to high and starts singing to the Luke Bryan song. “She was like, oh my God, this is my song.” Angel jumps out of the kotse (car) and starts to sayaw (dance), twirls and laughs. Now fronting the saken (car) she leans over the hood and points to Michael.

Angel signaling him the “magaabot (come) here” gesture with her index finger, puckering her lips and posing her sexy stance. She continues to sing, “She was like, come here boy, I wanna to dance, ‘fore I said a word, she was takin’ my hand.”

Grinning, Michael turns off the sakyanan (car) and quickly climbs out of the driver’s seat.

They both laugh and Angel skips off. Michael tries to catch up but she speeds up faster, giggling. He leaps for her as she turns around and they bump into each other.

“Wow, Mr. Poop emoji,” Angel says, pointing to his shirt. “What a nice voice you have.” Michael chuckles, “Oh, like poke?” while pointing to her t-shirt.

She covers her chest and bats her eyes.

Michael: Let’s go for a walk. This is called Front … .

Suddenly a teen on a bike nearly runs him over. “So sorry mister to you and your daughter!” as he raises his kamot (hand) and disappears around the corner.

Michael pointing at the teen, grunts, “She’s not my daughter!” then trips on the curb.

Dusting himself off and checking for any injuries, Michael notices a piece of paper stuck on his palm. He opens it and instantly recognizes it as one of those papers hidden inside a fortune cookie.

“Do you have a band-aid?” Michael asks.

Michael: I scraped my tumeng (knee) when I fell for you.

Angel looks at Michael in dismay and they stand looking at each other in silence.

“Yes! Michael, I can’t believe we just said that,” his conscience says to him.

Angel: What did you just say?

Michael clears his throat and says “I scraped my atuk (knee) when I fell for you.”

Exasperated, Michael smacks his gamat (hand) on his face, turns around and points to the street. “Haha, nevermind that. Let’s go for a walk on Front Street.”

Angel followed a few steps behind him, blushing.

They pass the USPS post office and Bank of Hawai‘i on the way to Front Street. There, facing them is Bubba Gump Shrimp Company. Angel sees a bench with shoes, dashes in front of Michael and crosses the street. She sits on the bench, fits her paa (feet) in the shoes, places her kamay (hand) on the box of chocolates, and says “Mama said, life is like a box of chocolates, you never know what you’re gonna get.”

“She looks good wearing my t-shirt,” he says to himself.

With a sinister smile, the voice in his head says, “I’m never going to wash that shirt ever again. Hahaha.”

Angel: What’s so funny? And why won’t you wash this shirt Michael?

“OMG, did I say that out loud,” he says to himself.

Slowly hiding behind his camera phone, he continues to take photos.

Angel: Mekeni (Come) here, let’s do a selfie! Michael sits next to her and positions his camera for a selfie. Angel turns and leans back into him, then places her kamay (hand) on his leg.

Michael, never been touched by a woman before, begins to shake and the camera falls on his lap. Angel turns to look at Michael and tries to recover the phone. He is now turning pale. 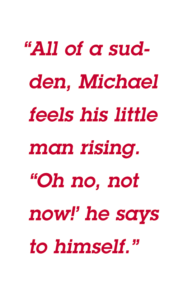 All of a sudden, Michael feels his little man rising. “Oh no, not now!” he says to himself. Sweating bullets, the little man rises to full attention. He nudges her away and fakes an injury. “Ah, Ah, oh cramp,” as he clenches his inner thigh.

Angel leans in and tries to help him. “What happened, are you ok?” she asks.

Michael waving his finger, “No, No. I got it. Give me a minute please.”

Angel stands hovering over Michael who is grimacing in fake pain on the bench. People are starting to flock to him to see what is going on.

“Sir, do you need medical help?” someone says from a distance.

Wow! I wonder if Michael’s phone is still ok. What do you think? Fortune cookies have many different messages in them. Some are good, some are bad.

Nowadays, it seems they are all advice-type of quotes. Have you ever seen the movie “Big” starring Tom Hanks? In a nutshell, Josh meets Zoltar, a fortune telling machine and wishes to be “big” or an adult and the next day, he turns into an adult. Better watch out, what you wish may actually come true. Have you ever had a fortune come true? Tell us at www.facebook.com/filamvoice, we would love to hear your story. 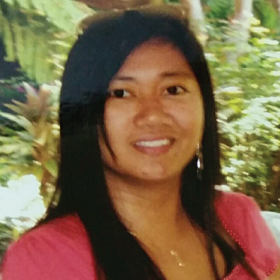 Dulce Karen Butay was graduated from Maui High School and earned her Associate in Arts degree in Liberal Arts from Maui Community College and her Bachelors of Science in Business Administration, specializing in Accounting, from the University of Hawai‘i—West O‘ahu. She is currently the Administrative Officer at the County of Maui, Department of Finance. Butay is a licensed Resident Producer of Life Insurance with World Financial Group and an Independent Consultant of Saladmaster. She is now part of the Travel Club of Saladmaster and won an all-expenses paid trip to Cancun, Mexico with the love of her life. Butay has traveled to Texas, the Philippines and Thailand as one of the delegates from Island Healthy Solutions, a dealer of Saladmaster here on Maui.