It’s back to school month. Did you buy all your school supplies on the list according to your grade level? Oh wait, we are still not sure if the children are going to school or not.

How will our school system bring our kids back to school? How are children going to be educated during this pandemic time? What will be the new normal? Virtual learning? Will you consider homeschooling? Or are you sending your child (ren) to the school? Will you have peace of mind or worry about the welfare of your child(ren) while in school?

In the end, I hope our children will get the education they deserve. Let’s see what’s going on with Michael and Angel, this month and where they will be going next, shall we?

Michael sat in his lugan (car) for a while.

How do I find Angel in this kalibutan (world)? San o (Where) does she live? Sino (Who) can help me?

Michael turns his kotse (car) on and let it idle for a minute to think of a new plan. He lay his head back, pushing it into the headrest. Michael closes his eyes. In the still of darkness and as the radio in the background fades away the rear of his unconscious, a familiar sound of laughter takes control of the silence. And as the laughter slowly settles in, a familiar voice questions him.

“Palito? Why are you sitting in your lugan (car) like a creeper?” the voice says as she begins to laugh again hysterically.

Rossssiiiiiieeeee! Yes, Rosie can help me find Angel. Opening his eyes and jumping in his seat, he hits his head on the steering wheel and bumps the horn a bit.

As he grips the steering wheel, Michael turns on his headlights and pulls into Hana Highway. He is so excited and drives back to town with a big timan (smile) on his rupa (face) and then suddenly …

Hani (What) happened? His sakyanan (car) is pulling to the right and now starting to vibrate. How come my lugan (car) is slowing down?

Looking around to see if there are any vehicles coming, Michael pulls on the side of the road and inspects his vehicle. He looks at his harapan (front) tire, then his rear. Everything looks fine. He makes his way past the trunk, the passenger side rear tire is fine. As he lifts his head to wince and focus his eyes, there it is, a flat tire driver’s arubang (front) tire blown out.

“Ah,” he sighs. “Just my luck,” as he rubs his kamot (hand) around the tire, searching for clues of ano (what) could be the culprit. As he continues his lima (hand) inspection, finally he feels a bump in between one of the deep treads in the rubber.

“Aha,” Michael says. Squinting in the dark, the faint light coming from the Lower Pa‘ia restroom is just enough to spot the metal lag head sticking out from the tire. “How the heck is this possible?” he mumbles.

Oh man! Flat tire? Of all the times that I am on a mission of doing something, I get a flat tire. Great! Now anni (what)?
“Ano (What) do I do? I never changed a flat tire before. I always had dad or my uncles help me all of my life,” thought Michael. For every problem at the dormitory at the college campus, Michael’s dad would help with repairs. His saken (cars) were always sent to the mechanics of the family which would be all of his uncles. He could just call any of them and help would be on the way. As for himself, he never lifted a finger. He never took auto in high school, he was a simple book worm and part-time video gamer. He never had a knack for tinkering with equipment or machines. Once, he tried to change his oil with uncle Ray and oil got all over the driveway and he nearly drowned himself in 10w30. Him changing a flat tire? Ha! Where would he even start?

“Who am I going to call this early morning? I know everybody is up and doing something in their houses but which Uncle should I call? Uncle Sonny? Uncle Boy? Uncle Ray?” Michael had a lot of choices and he couldn’t even pick one.

He reached for his pocket and … “where’s my phone?” He freaks out, grabbing his chest, forcing his gamat (hands) into all of his pockets. He goes inside the auto (car) and searches for it. He looks all over the passenger seat and it’s not there. He opens the middle compartment—not there. He moves the driver seat all the way back and peeks underneath—not there. He starts to panic and throws things around like a wild man. “Where did I put my phone? Agh!” he shouts to himself.

Michael is frustrated and pouting like a young boy not getting the toy he wants from the store.

He sits in his sasakyan (car) so as to not create a big scene.

He looks up “There it is! I just didn’t see it sitting on the dash—duh, in my face,” he gasps while reaching for it. My mom would have said “Look with your eyes Michael and not with your mouth.”

Michael hits the power button on his phone and nothing. He tries it again and again, blank screen. He holds down the power button and that’s when the signal of battery death comes on the screen—0%. Fumbling through his things, he searches for a charger. Nothing. Emotionally spent, he throws his kamay (hands) in the air and starts to cry. 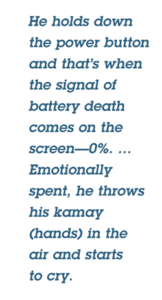 “Crying is so childish. Ana (What) am I doing? I’m a grown man.” Gently wiping his eyes, he realizes he didn’t wash his kamay (hands). “Oh, I have hand sanitizer somewhere.” He opens the middle compartment and sees his car charger sticking out next to his sanitizer bottle. He quickly plugs his phone and charges it.

All of a sudden, he hears a loud knock on his window.

Outside his window Michael sees a homeless guy hovering over him. Scruffy looking, and obviously hasn’t taken a shower in a while, Michael can make out his voice but he hears only a muffled sound. Michael slowly leans away from the window.
Nanoyin (What) does this guy want? “Leave me alone!” Michael says.

The man knocks again. Muttering something and spit splashes on the glass.

“Mommy!” Michael howls at the moon.

Suddenly, the two men are gone and he hears his trunk open.

“Oh no! I’m going to die!” his sobbing grows worse and he clinches his eyes.

Michael finally builds the courage to open his eyes and takes a look outside. As he peeks out the window he sees one man jacking the sakyanan (car) up and the other untightening the lug nuts.

Michael unlocks the car door and is about to open the door when his phone rings.

Find out who’s calling Michael and keep an eye out for my article every issue. 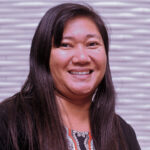