Third in a series 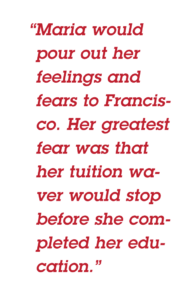 In the last year, Francisco had become Maria’s confidant, protector, and a very good friend. Nothing else. Although at times Maria would dream about what if….
Francisco inadvertently learned about Maria and his father late one night. Francisco was returning to the Mayor’s office when he saw Maria leaving the Mayor’s private office after 1 a.m. Francisco, Junior’s Chief of Staff, knew not to confront Maria; she wasn’t the first woman to be leaving Junior’s office late at night; and Francisco knew Maria would not be the last.

Francisco was torn because he was his Dad’s Chief of Staff and had to protect his Dad, the Mayor of Diliman, but he was also the son of Ofelia, his Mom. Francisco was also Maria’s mentor when Junior first hired Maria as a Special Assistant for Special Activities. Francisco knew his Dad was no saint and that his Mom tolerated his Dad’s affairs.

One day, Francisco asked his Mom why she tolerated Junior’s affairs and Francisco was surprised with his Mom’s response. “Cisco, I pledged my whole life to your Dad when we were married… and we became partners when he entered politics. My job was to raise you and your siblings,” Ofelia explained. “In our country, men are philanderers but in the end, women are the ones who make all final decisions. My Dad was the same as your Father and my Mom tried to leave him but that only caused me and your uncles and aunties more grief. When I married your Dad, I swore that I would not be like your Grandma, that I would honor my vows even if your Dad did not. Your Dad knows where his home is and that I will always be here for him. He cannot leave me because your Great-Great grandfather Jose made sure that all the family money was tied up in a trust that requires my approval for every transaction over two thousand pesos. So in between my raising you and your siblings, I’ve been busy with the family’s finances. Your uncles Raul and Hector help with the accounting and legal stuff but in the end, I make all decisions.”

It was easy with Maria as Francisco already had a former mentor relationship with her. A few days after his discovery, Francisco privately talked to Maria to ascertain Maria’s intentions and learn more about her. Francisco learned about Maria’s family in Davao, how poor they were, and how Maria’s family relied on her. Francisco had heard this story before but for some reason, Francisco believed Maria would not turn into a delicate situation when his Dad would tire of her.

Maria poured out her feelings and fears to Francisco. Her greatest fear was that her tuition waiver would stop before she completed her education. And Maria was at the top of her class, and despite her busy schedule, was her class president. Maria showed a lot of promise at De La Salle and some professors even encouraged her to go beyond an RN degree but Maria would simply smile and say she could not commit to anything beyond graduation in a year.
For some reason, Maria felt so comfortable with Francisco; even more comfortable than with her best friend Elena. Despite all of his education and success, Francisco was humble and such a jokester when he was with Maria. At times when Maria would show up for a scheduled “appointment” with Junior and Junior was no where to be found, Francisco would step in and offer to have dinner with Maria. Maria would think “Wow, this is what a real date is supposed to be like… except there was no sex after dinner.”

So it was not unusual for Maria to text Francisco early in the morning to say she wanted to chat and had coffee for him. Francisco loved his coffee and drank it black–the darker the better he said.

Francisco lived just a few blocks from St. Mary’s Cathedral. Maria also knew the guard, Tino, who smiled and buzzed her in. Maria knocked on the door and a smiling Francisco opened the door, took the cup of coffee from Maria, and offered Maria some freshly baked pandesal. Maria politely refused although the smell was tempting.

“Francisco, I don’t know what to do anymore,” Maria explained. “I am so confused and I don’t want it to affect my studies. Your Dad is so nice to me but what will happen in the future? What if I don’t finish school? My family is relying on me for support and I don’t want to become an overseas worker like my Tita Josie. And I’m not feeling well, I’m dizzy, and I don’t have an appetite. I think I’m gaining a little weight. I don’t know what’s happening to me…and I’m afraid to go see a doctor. What if I’m pregnant or something?”

Francisco knew Maria was a chatter box with him. Maria was so comfortable with Francisco that she would just go on and on and not let Francisco interrupt. Francisco was always patient, always listening, and always letting Maria speak. But this morning, Francisco was shocked when he heard Maria mention the “p” word.

“No! No! No!” Francisco exclaimed. “You can’t be pregnant! That’s impossible!”