Many of us enjoy dining at Tante’s Restaurant at the Maui Seaside Hotel in Kahului as well as the new Tante’s Fishmarket Restaurant & Bar at Ma‘alaea Harbor. Have you ever wondered who that individual is who brought to Maui a relaxing place where we can enjoy eating as a family with some local food especially those of us who enjoy Filipino foods similar to that of our mothers’ cooking? Well, their food really warms our tummies, hearts and our souls. This individual is a Sakada Offspring and none other than Tante Urban.

Tante was born on July 20, 1951 in Magsingal, Ilocos Sur, Philippines to Daniel and Felicitas Urban. His father Daniel came to Hawai‘i in 1946 as one of the thousands of Sakadas who were recruited to come and work in the pineapple and sugarcane plantations. He was 24 years old and still single. He boarded the S.S. Maunawili from Port Salomague in Cabugao, Ilocos Sur, Philippines. Upon arriving in Hawai‘i, he first worked at Kea‘au sugar cane plantation on the Big Island of Hawai‘i and then moved to Molokai pineapple plantation.

Five years later, Daniel returned to the Philippines to see his family and to find a wife. While in the Philippines, he bought a jeep to transport paying passengers between the cities of Ilocos Sur province and it was in one of his trips that he met an attractive young store owner, named Felicitas Farinas Tolentino. After courtship, Daniel and Felicitas got married on July 14, 1950. By the time Daniel returned to Hawai‘i, Felicitas was one month pregnant with their first child, Tante.

Felicitas stayed in Magsingal working and raising their son while Daniel continued working in Hawai‘i but made return trips to see Felicitas. In 1960, their daughter Donna was born. By 1967, Tante after completing his high school education, came to Hawai‘i to be with his father. A year later, Felicitas and Donna also came to Hawai‘i. The Urban family was reunited. The family lived on a farm in Captain Cook and by this time, Daniel was working at the Kona Inn earning a better wage. Not long after that, Daniel found employment at the Keauhou Beach Hotel and then the Kona Gallery Restaurant before retiring.

Tante and Donna have thrived in their Big Island home. Donna graduated from High school and in 1980, she was crowned as Miss Hawai‘i Filipina. She has since been successful in a variety of business ventures. Tante graduated from the University of Hilo with a B.A. degree in Hotel Restaurant and Management in 1970, holding different positions in the culinary field before starting Tante’s Restaurant 32 years ago.

Tante’s Restaurant started in 1986 in the industrial area in Kailua, Kona on the Big Island of Hawai‘i and later moved to Frame 10 Center at the Kona Bowl, also in Kailua. Because of its quality food, friendly service and affordable prices, it became a local institution. It also became a gathering place where the locals ate and talked stories and caught up on community events and activities. Tante’s willingness to listen to his customers’ comments to adjust the menu really kept up with the tastes and preferences of his changing customers. The local newspaper, West Hawai‘i Today selected Tante’s as “Best Filipino Restaurant” several times.

In addition to his restaurant, Tante had a contract to operate the employee cafeteria for the 485 room Marriot Waikoloa Beach Resort on the Kohala Coast of the Big Island.

Life is a roller coaster. When you are down, you can get up again even when experiencing a sudden dip. Like everyone else, Tante also had his ups and downs in both employment as well as personal. In his autobiography, he mentioned two food for thought: “Failure is simply the opportunity to begin again, this time more intelligently. It is the road to success. Ability is what you are capable of doing. Motivation determines what you do. Attitude determines how well you do it.” Tante truly practices what he preaches.

In 1988, he went back to employment as Chef Garde Manger of the Royal Waikoloan Hotel. He had a chance to showcase his masterpieces in ice, vegetable or tallow carvings. He enjoyed his new job.

His personal life also had a new beginning. His new-found love of his life, Telly became his wife on July 1990. They have become great partners in life and business ever since. Besides being very successful in the restaurant business, Tante is also a very successful Realtor and acquired many real estate properties as investments, especially on the Big Island of Hawai‘i. He also worked on real estate, building affordable housing in Kona.

At present, Tante’s Restaurant has relocated to Maui Seaside Hotel in Kahului, Maui, and has been in this location for eight years. Last September, Tante opened his second location, Tante’s Fishmarket Restaurant & Bar at Ma‘alaea Harbor.

Tante knows how to balance his life. He works hard but also plays hard especially in the game of tennis, his favorite sport. In fact, he won tournaments at both the 3.5 and 4.0 levels. He says that tennis is an enjoyable sport and it uses the “language of life,” such as love, advantage, fault, service, all, deuce, and break. He also added that tennis can help build mental toughness, positive thinking and visualization of a positive outcome. Besides tennis, Tante also enjoys basketball and chess. He finds that the game of chess is a perfect exercise for the mind to focus which is needed when starting a new project, making investments, solving problems, etc. In fact, when he was in Kona, Tante even organized the “Pinoy Shooters” an all Filipino basketball team of Kona.

With his successes, Tante received the following awards and recognition: In 2004, he was nominated as Filipino Entrepreneur of the Year Award (Filipino Chamber of Commerce of Hawai‘i). Also in 2004, he was the Asian Entrepreneur of the Year in the Hospitality Category. He was featured on TFC Television, ABS-CBN, as a Filipino Entrepreneurial Success in Hawai‘i and in 2005 in the Asian Enterprise Magazine. Tante’s Restaurant has been voted 12 consecutive times as “Best Filipino Restaurant” in the annual Readers’ Poll by newspaper West Hawai‘i Today. Tante is a member of the Rotary Club of Kona Sunrise, District 5000 and the Maui Filipino Chamber of Commerce. 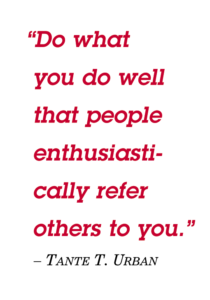 In his autobiography, Tante suggested the following Guide to Happiness and Financial Independence: Live your ideal life—NOW. Do things that are extraordinary and nearly impossible. Believe that If it’s to be, it’s up to me. Think BIG. Plan. Act immediately. Keep in contact with the best, experience the best. Do what you do well that people enthusiastically refer others to you. Inspire others by your example. Build your reputation for honesty, integrity, quality and superb service. Aim for excellence in your field. Support others in achieving their goals. Take total responsibility for your past, present, and future experiences. Strive to accomplish more with less time, money, and energy. Do and say things that benefit all concerned. Be open to new ideas, relationships, experiences. Take calculated risks to get ahead. Know that you are equal to everyone and everyone is equal to you. Accept people for what they are and not what they are not. Forgive and love everyone. Save 10-percent or more of your net income. Give something away daily;… a smile, a hug, compliment, gift. Collect pictures of what you want to be doing and what you want to have in your life. Do not criticize, condemn or complain. Act as if it were impossible to fall. Dress to look and feel great. Collect quotes that will motivate you. Speak and write only positive words. Learn something new every day. Exercise regularly to maintain your ideal body. Eat healthy foods. Avoid saying: can’t, hard, difficult. Say: I can, it’s easy, it’s simple. Listen to music that can motivate you. Carry a crisp $100 bill with you at all times. Act as if your goals are already accomplished. Constantly escalate your goals. Go for it! Tante proudly attributes his successes to his parents, Daniel and Felicitas Urban who had high expectations of him. “They trained me well,” said Tante. “They molded me based on a few key principles; a willingness to work hard, perseverance, patience, and focus.” Besides his parents, he also attributes his successes in life to his loving and supportive wife, Telly and their four children, Tante Jr., Bernie, Ryan, and Edwin.

Tante’s immediate hopes and dreams are to help in the unity among Filipinos and to complete the Bahay Kubo Project, the renovation of the Filipino Hut at Kepaniwai Park at ‘Iao Valley.

Tante, you are truly the hero of your own life! 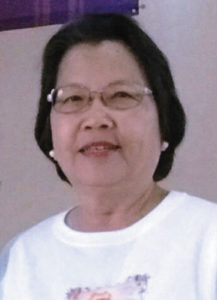 Lucy Peros is a retired school teacher. She taught at St. Anthony Grade School and Waihe‘e Elementary School. Both her parents, Elpidio Cabalo and Alejandra Cabalo of Hali‘imaile worked for Maui Land and Pine Company. Her Dad was a 1946 Sakada. She is now enjoying retirement. She now has time to join the other seniors at the Enhance Fitness Program under the Department of Aging three times a week, attend the line dancing class and other activities at Kaunoa, joins the other Waihe‘e School retirees when help is needed at the school. Lucy also devotes some of her time to activities at Christ The King Catholic Church. She enjoys writing and reading on her spare time.