Like our Sakada fathers, grandfathers, and great grandfathers before us, we, second or third generations Filipino-Americans also have many stories to share and tell regarding our challenges, frustrations, and successes as we were immersed into the life here on the islands of Hawai‘i.

Shirley Evangelista is our featured Sakada Offspring who came to Hawai‘i with her mother, Julia Siores Evangelista and their cousin, Corazon Manzano in June 1946 on board the S.S. Marine Falcon, the first boat of families from the Philippines. They came to follow her father, Crispulo Evangelista who was a Sakada from Urdaneta, Pangasinan, Philippines.

Actually, Crispulo Evangelista first came to Hawai‘i in 1921 with his father, Laureano Molina Evangelista and his sister Lucina. He was only fourteen years old. They settled on Kaua‘i. Laureano worked for the Līhu‘e Sugar Plantation. Since Crispulo was too young to work in the field, he became an errand boy doing odd jobs for the plantation bosses and their families. Life was hard in the Evangelista family. They decided to move to Ola‘a on the Big Island of Hawai‘i. Ola‘a is presently called Kea‘au.

In September 1936, Crispulo went back home to Urdaneta, Pangasinan, Philippines. That’s when he met a beautiful young lady at a sari-sari store where he went to buy some cigarettes. Although there were many other available young ladies in Urdaneta, Crispulo fell in love at first sight with Julia Siores. They were married in 1937. Their daughter Shirley was born a year later.

Because of World War II, Crispulo stayed in the Philippines until 1946. One day he received a letter from his father Laureano saying that HSPA (Hawai‘i Sugar Planters Association) was recruiting workers to work in the sugar plantations in Hawai‘i. With the encouragement of his brother in law Vicente, he went to Vigan, Ilocos Sur to sign up. He came to Hawai‘i with his cousin, Teofilo Manzano and his nephew, Silberio Libao on board the S.S. Maunawili, leaving Port Salomague in Cabugao, Ilocos Sur, Philippines.

Shirley was eight years old when she and her mother reached Hawai‘i. She entered second grade at Ola‘a Elementary School on Hawai‘i Island. She was so afraid to go to school and even hid under the wooden schoolhouse. She was afraid of the school principal because he reminded her of the Japanese soldiers in the Philippines during World War II. With her cousins, they walked barefoot one mile to go to school and one mile back to go home. At school, Shirley recalls, they played with sticks hitting it as if it was a baseball to see how far they could hit it. The person who hit the stick the farthest was the winner. Other games they played were catching and kicking bean bags, blowing bubbles using detergent and papaya stalks, sling shots made of guava branches, swinging on vines Tarzan style, and even playing house with her girl friends cooking with their cooking toys. They were very resourceful as kids.

In the early 1960s, Rafael Cabebe and Nicanor Domingo encouraged Crispulo and Julia to move to Maui. They accepted the opportunity and moved. It was a blessing in disguise. They opened their tailor shop in Happy Valley located across the former T.K. Supermarket adjacent to the former George Guerrero’s Market. Crispulo was very active in the Filipino Community. He worked at Maui Memorial Park as a salesman. He worked as a travel agent and he was the first Filipino Radio Announcer for KNUI.

In 1968, Shirley followed her parents to Maui with Mr. Domingo’s encouragement. He wanted her to come to Maui to help uplift the image of the Filipinos especially the Filipino youths. While on Maui, she worked with Dr. Alan Miyamoto as his Dental Assistant.

Shirley became involved with Filipino activities and organizations. She was crowned as the first Miss Barrio Fiesta on May 31, 1970. She was also chosen as Miss Maria Clara around the same time.

In the 1970s, there was an influx of Filipino families with young children on Maui. Then Mayor Elmer Cravalho inquired with future Judge Artemio Baxa if he knew of any Filipino teachers who could help the Filipino youths because of the language problem in the schools. Baxa approached Shirley and Nancy Andres, who had initiated the Barrio Fiesta, having arrived from the Philippines after a brief stay in Honolulu. Both Shirley and Nancy accepted and welcomed the challenge. Shirley quit her Dental Assistant job and the bilingual program in the schools on Maui was born. Shirley and Nancy set up the program from scratch. To help them get started, they attended numerous workshops, conferences, meetings with principals and teachers using countless hours of their own time in developing the program. These two ladies paved the way for Filipino teachers to teach in the Hawai‘i Department of Education. 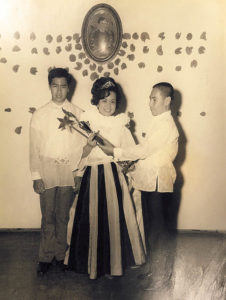 Some administrators and teachers even looked down on Shirley and Nancy as they tackled their jobs as bilingual teachers especially when students from other ethnic groups came into the program. They questioned how Shirley and Nancy would teach multi-lingual students. Shirley nicely put her answer to their question and said, “As long as you have compassion and the love to teach, you can teach anybody.” With Shirley’s and Nancy’s positive attitude, with compassion and the love to teach, they succeeded. Today, the program has expanded to all the public schools on Maui.

In the late 1980s, Shirley worked for the County of Maui’s Summer Youth Employment Program. Today, we can see the fruit of their labor with the rows of coconut trees that they planted along the Kahului Beach Road next to the Maui Arts and Cultural Center across the Kahului Harbor by the food vendors. At around the same time, Shirley’s Filipino Baldwin High Youth Group cleaned the hill in front of the High School overlooking the school parking lot. They planted beautiful bougainvilias to beautify the campus. It is being enjoyed by all today as they drive by Ka‘ahumanu Avenue.

Shirley wore many hats. She was also a PBX operator at the old Maui Palms Hotel and the Maui Beach Hotel from 1980–2001.

Shirley recalls her Christmas experiences and memories: “Christmas is a time when we thank God for His many blessings to us. Although we are busy during the year, Christmas gives us a chance to get together with family and friends, far and near. Despite being poor, we always had food to eat, to share with family and friends. When I was in the Philippines, I was still too young to know about Christmas. We have families visit and special foods were served. When we came to Hawai‘i, my parents and I went to church on Christmas eve. When we came home, we had bowls of hot arroz caldo, suman, bibingka and hot cocoa.”

Shirley hardly remembers exchanging gifts at Christmas time. Instead, she remembers having new dresses on Christmas and new pajamas on New Year’s from her parents.

While in Hawai‘i, on Christmas Day, Shirley’s family went to her Uncle’s house where there were lots of prepared foods like broiled fish, chicken and pork adobo and desserts galore like patupat, bico, suman and bibingka. Christmas was also celebrated with nieces, nephews and cousins. They even had lechon pig and roasted turkey. However, now that the children are older and moved away, Shirley’s family celebrates Christmas on December 20, her mother’s birthday. Sadly, Julia recently passed away on November 28, just a few weeks shy of her 98th birthday. Julia is now reunited with Crispulo, who passed away in 1983.

Shirley confessed she still believes in Santa Claus because she feels it is part of the magic of the season. She also enjoys the stories of Santa Claus.

Shirley has vivid memories of Christmases past when she was living on the Ola‘a plantation. They had a yearly Christmas party. The young children would do the Christmas caroling and the older ones would do the play. Each child would receive a bag containing an orange, an apple, nuts and Christmas candies.

Another priceless Christmas memory that Shirley experienced was during her first year of college. There were four students who stayed in the dormitory that year at Christmas time. They couldn’t go home. One morning, one of the girls pounded on Shirley’s door yelling, “Get up it’s snowing!” They all ran downstairs onto the snow-covered lawn. They were very happy to see the snow for the first time. The next morning, one of their nursing instructors took them to the mountains and for sure they had their fill of snow galore. That was an unforgettable experience for Shirley. Since then until today, her favorite Christmas carol is “White Christmas.”

Shirley’s favorite Christmas ornament is the parol, a star made of bamboo and decorated with colorful tissue or cellophane papers. Her own students taught her how to make them. Some of her students’ parents also made beautiful parols for her.

“Life is a meal,” says Shirley. “Live it with flavor. Spice it with interest in people, places and things. Serve it with a feast of color and life becomes full and rich.”

Although this Christmas will be her first without her Mom Julia, Shirley’s strong foundation in God assures her that her parents are in a better place. Shirley is thankful for their lives and for God’s many blessings and wishes everyone a very Merry Christmas.