To Protect and Preserve Life, Environment and Property – The Mission of Maui’s Firefighters

Home Featured Stories To Protect and Preserve Life, Environment and Property – The Mission of Maui’s Firefighters

To Protect and Preserve Life, Environment and Property

The Mission of Maui’s Firefighters

“I like helping people … keeping them safe. It’s a good feeling when you help somebody out,” said Willie Barut who works at the Lahaina Station and is Maui’s only Battalion Chief of Filipino ancestry. Steven Haban from the Wailea Station sees himself along with other firefighters as a public servant. He says the “community is the sole support for our careers” and serving as a firefighter is “a way of giving back.” Ian Pascua of the Kīhei station enjoys the firefighters’ mission to help the community and is in awe of the feeling that comes when “you show up to help on peoples’ worse day of their lives.”

For Barut, Haban, Pascua, and the other dozen or so firefighters of Filipino ancestry in Maui County, the action to help without hesitation was ingrained in them by their mentors, family, and friends. 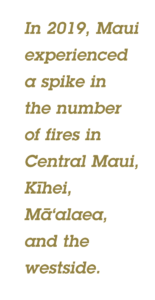 The month of October is celebrated annually as National Fire Prevention Month with firefighters across the nation including those on Maui participating in a variety of public events and activities to provide a greater understanding of the work of firefighting. In 2019, Maui experienced a spike in the number of fires in Central Maui, Kīhei, Mā‘alaea, and the westside. Maui residents are forever grateful to Maui’s firefighters for battling the fires and placing their own lives in danger. For those of us who have ancestral roots to the Philippines, it is an utang na loob—a debt we can never repay.

Historically, Maui’s fire department was established on July 1, 1924 when the Wailuku station was first opened with seventeen paid positions. There are now fourteen stations in Maui County which are numbered in the order of their establishment: ten on Maui (#1-Wailuku, #2-Pā‘ia, #3-Lahaina, #5-Makawao, #6-Kīhei, #7-Hāna, #10-Kahului, #11-Nāpili, #13-Kula and #14-Wailea), three on Molokai (#4-Kaunakakai, #9-Ho‘olehua, and #12-Pūko‘o), and one on Lāna‘i (#8). The department now called the Department of Fire and Public Safety has almost 400 employees consisting of uniformed firefighters, support staff and lifeguards, who were transferred to the Fire Department from the Department of Parks and Recreation in 2016.

Current Fire Chief David Thyne was selected in August 2018 by the Maui County Fire and Public Safety Commission. He has served more than thirty years as a firefighter and was part of the Fire Department’s first recruit class, joining on September 16, 1987. In materials provided by Thyne, the Fire Department responded to nearly 15,000 emergency situations in 2018 including fires, hazardous materials incidents, motor vehicle accident, medical emergencies, natural disasters, and a variety of rescues.

Thyne is responsible for recruitment, which occurs only when there are enough vacancies to fill a recruit class. He described with concern how of the 300–1000 people who take the written test, about 400 pass, out of which 45–50 pass the physical test, from which 15–25 ultimately join the recruit class.

Pascua observed that “the written test weeds out many … by requiring competencies in math, reading comprehension, mechanical aptitude, and problem solving.” Haban recalls how at the age of 21 while he was in college, he failed the swimming class. The test was to swim 100 meters in 2:15 minutes, then dive down to pick up a five-pound object—a rubber brick. Haban was bummed and recalls the advice from his friend Louis Pine Romero, a firefighter, who told him “If opportunity comes up, you gotta be ready for it.” So, Haban tried again and eventually passed, with his college friend Ray Watanabe saying “You’re going to be there with me. I’m not doing this alone.” Haban, with visibly deep emotions of heartfelt gratitude surfacing, says Watanabe “was there when I brought that brick back.”

Thyne explains competitive wages and the opportunity for advancement assist with the recruitment effort while a call to service constantly remains the highest motivator.

“It looked cool when I was a kid,” said Jared Calvan of the Lahaina station. “But then as an adult, it was important to help the community and be a part of the fire department.” Calvan has been a firefighter since April 2018, after being a diver with the U.S. Navy for seven years.

Many firefighters have family members who were also firefighters while others have very close friends who were firefighters. For Justin Arruda of the Kīhei station, his father Derrick Arruda was his role model and inspiration to become a firefighter. Derrick Arruda was the first firefighter on Lāna‘i which opened in 1988 and later he became a Captain, then Battalion Chief in 2008 and Assistant Chief until 2013. Pascua knew as a boy that he would be a firefighter one day, the natural result of spending many hours at the fire station with his father, Alan Pascua, a former Battalion Chief at the Kahului station and five years as Assistant Chief. Tyler Pascual of the Pā‘ia station says his father Richard Pascual, who retired as a school principal in Fresno, California was a firefighter but it was his neighbor Robert Shimada, a retired Deputy Fire Chief, whom he chatted with on frequent jogs around the neighborhood that advised him to study and work hard to take the firefighting test.

Roger Agdeppa of the Kahului station explained the idea of him becoming a firefighter was the result of being in the company of co-worker firefighters at the Maui Prince where Agdeppa was the bar back for twenty-seven years. Uilanimanu “Lani” Gomes, now the Captain of the Hāna station, is one of three women now serving as firefighters. She considers herself lucky to have connected with Al Duarte, a Battalion Chief, who overturned and totally dispelled Gomes’ longtime impression that the fire department did not do much. Through continued conversations with Duarte, Gomes learned about the physical and mental challenges that firefighters face daily in their jobs.

Dana Anderson of the Lahaina station says what he likes about firefighting is that the work is both physically and mentally challenging, somewhat like sports, which requires problem solving under physical stress. Arruda applauds the work of the in-house team of Critical Incident Stress Management (CISM) which helps firefighters to restore balance and healing after tragic or gravely sad incidents and the extreme, sometimes even long lasting effects of exhaustion.

For many firefighters, the biggest challenge is to balance home life with work. “I like challenges,” said Calvan. “But being away from home for twenty-four hours is a challenge. Sometimes the shift goes into overtime.” Calvan, who is married and has two young children, says his three-year-old daughter tells his wife Marcie that Daddy “lives in a fire truck in Lahaina.”

Anderson agrees that one downer is the work schedule, which makes it sometimes hard to balance with family activities. His maternal grandparents were Zacharias Paet and Cayetano Torricer Paet. Agdeppa says that for him, the biggest challenges involve the balancing of home life with work. He is the father of three sons, including twins, with his wife Tiare. Agdeppa traces his roots to Ilocos Sur; his mom is from Cabugao while his dad is from Sinait. Gomes traces her roots to Ilocos Norte through her paternal grandpa Donato Gomez whose name was changed by one letter from “z” to “s” with no explanation. Gomes also traces her roots to Bacarra, Ilocos Norte through her maternal grandpa Marcelo Gamorot whose true last name is Arciga. Haban and his wife Stacia have two young children. Haban traces his roots to Santa Lucia, Ilocos Sur through his Dad Alejandro Haban, a 1946 Sakada who returned to the Philippines in 1967 to marry Maria Acorda from Bacarra, Ilocos Norte. Arruda has a five-year-old son with his wife Laura. He traces his roots to the Visayas through Grandmother Arao. (Other firefighters who have identified as having Filipino roots but who were unavailable include Modesto Jacinto, Cory Palmiera, and Simon Quirk of the Kahului Station; Brent Barbero and Nelson Saribay of the Makawao Station; Henry Patao of the Nāpili Station; and recently promoted Captain Vernon Patao who was transferred from the Kahului Station to Molokai in September.)

With firefighters living at the station for twenty-four hours at a time, they all pitch in. A typical day begins at 7:30 a.m. with the shift change. Checking the trucks and equipment takes about two hours, followed by house chores such as keeping the house tidy, cleaning the bathrooms, and cleaning the kitchen.

One person cooks for everybody on the shift, which usually means chef duty is about once a month. Kona Sarmiento of the Nāpili station loves to cook, specifically pork tofu, zucchini stir fry and steak and onions. Calvan, who was studying culinary at UH Maui College when he learned he was accepted as a recruit says “I cook a lot of braised chicken. I try to cook sinigang using my grandma Jacinta’s recipe because I’m the only Filipino on the watch. They say it’s good.”

Aside from their chef duties, the firefighters have other responsibilities at the station. Agdeppa is responsible for training recruits and incumbents, is the program director of courses such as Firefighter Survival and is a member of the Rapid Intervention Crew. Barut is the safety unit representative for OSHA briefings, doing investigations and reports for mishaps. Gomes utilizes her accounting degree to assist the department with budgeting. Haban is a trainer in special disciplines, for crew members progressing from captain and upward on the promotion ladder. Pascua is a teacher for recruit classes, training them for CPR, fire ground operations (search, ladders), and learning to maneuver while carrying 50 to 80 pounds of gear.

Despite their busy family and work life, many of the firefighters are also involved in a variety of community activities. Agdeppa has chaired the Out of Darkness Suicide Walk that raised $20,000 and volunteers for the Firefighter Surf Club while Barut is a reservist with the National Guard. Anderson is a coach for basketball and volleyball at his alma mater, Maui High School.

Maui is blessed to have our firefighters working “to protect and preserve life, environment and property” and for them to also be involved in our community. The challenges are many and require the ultimate dedication to the community.
“Firefighting as a career is as rewarding and challenging as any career,” said Pascual. “Every emergency situation is unique and the problematic scenarios we have to solve are never exactly the same. It’s the constant balance of education, experience and resourcefulness that make it an excellent career to pursue. It truly is the best job in the world. It is an honor to put on the uniform. You’re never really off duty and are always there to help no matter what.”

For that 24/7 status, Maui owes a debt of gratitude to its firefighters; a debt that can never be repaid—an utang na loob. 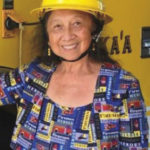 Elizabeth Ayson, Ph.D. has two firefighter sons—one on O‘ahu and one on Maui. She is a retired educator, having served in the State Department of Education for more than forty years. She previously served as the Principal at ‘Īao Intermediate School, the Vice Principal at Lihikai Elementary School and Maui High School. Ayson taught at Lihikai Elementary School, Blanche Pope School in Waimānalo, O‘ahu, Frank V. Thompson Middle School and Stuart Elementary School in Boston, Massachusetts. She was graduated from Baldwin High School, Knox College in Galesburg, Illinois (majoring in Music Education and Elementary Education) and the University of Hawai‘i at Mānoa (M.Ed.). She received her doctorate from Union Institute & University in Cincinnati, Ohio.
Assistant Editor Alfredo G. Evangelista contributed to this story.