In 1970, the month of May was selected as the month to hold the Barrio Fiesta because of the traditional Flores de Mayo festivals, known throughout the Philippines. I know this fact is in the annals of our Barrio Fiesta, the oldest and longest running Filipino Cultural event of its kind in the entire USA. But I say “Why not, of course, we are Filipinos and May is the month for the Barrio Fiesta to take place!” In the Philippines, as is the custom and culture of Catholic countries throughout the world, the entire month of May is dedicated to the Blessed Virgin Mary. There are daily processions and offerings of flowers (Flores de Mayo) to the Blessed Virgin Mary and statues and icons of her are festooned with not only these flowers but with garlands, ribbons and other colorful decorations. I say, again, “May is the month, very naturally, for this festival to take place!”

On the last day of the Flores de Mayo, a Santa Cruzan or Holy Cross Procession is held. The procession is held, with precision and attendant pageantry, to celebrate and honor St. Helena, the mother of the Emperor Constantine, who is commemorated as the discoverer of the “True Cross” or the “Holy Cross,” upon which hung and died our Lord and Savior Jesus Christ. You will recall that the Emperor Constantine embraced Christianity, thus ending the persecution of the believers throughout the Roman Empire.

Given that the Barrio Fiesta here on Maui, from its very beginning, took on a definite and publicly pronounced spiritual and religious foundation, I think it is good for us to know how our Santa Cruzan is held, which is not unlike the Processions held back in our mother country. I know that the hymn Dios Te Salve is sung or played during the Procession, as it winds its way through the crowd and up to the statue of the Blessed Virgin Mary.

Representatives or Princesses of our various constituent churches and groups make up the procession and the line of these representatives and their floral offerings is truly beautiful and a veritable cavalcade of faith, hope and love.

There are many variations throughout the world as to the specific characterizations in a Santa Cruzan procession but I’ve been told that what is important is that each person who participates is then identified with love and beauty. Ah, our Faith and our spirituality, as Filipinos, are about such love and beauty, don’t you think?

There are titles for each of those who process. We start with “Divina Pastora–The Divine Shepherdess.” Mary, as the Mother of God, is also reverenced as the mother and “Shepherdess and Guardian” of the Divine Shepherd, our Lord, Jesus Christ. Then there is “Reina de las Estrellas—Queen of the Stars.” Mary is blessed among all women and holds a special place among the stars. Next, we have “Rosa Mystica—the Mystical Rose,” recalling, in our faithful ferver, “the most beautiful of God’s creation, the Incarnate Rose,” Mary, especially chosen for God’s garden. You know, the Chapel at Chaminade University in Honolulu is entitled and under the patronage of Mary, The Mystical Rose! Next in the procession is “Reyna de la Paz, Queen of Peace.” Mary, the lover of Peace, is also known as the “Queen of Peace.” The Cathedral in Honolulu is entitled and under the patronage of Our Lady of Peace! Mary implores us, not only Filipinos but all peoples, to keep our eyes and our focus on God so that the world can have and be at peace.

The next title is “Reyna de los Profetas–Queen of Prophets.” This is a reminder that the prophets of the Old Testament, in their being among God’s People in their time, looked ahead to the coming of the Messiah. For us, Mary, the Mother God, the Messiah, is Queen for all time. The next title is a popular one among the faithful throughout the world. It is “Reyna del Cielo–Queen of Heaven.” In the faithful understanding of our belief, we know that Mary’s Son, Jesus Christ, is the King of Heaven and the Universe. So by faith we know Mary to be the “Queen of Heaven.” Next in line is “Reyna de las Virgines—Queen of Virgins.” In the reality and enduring, faithful legacy of the Blessed Virgin Mary, we know she inspires all young women amongst us and honors, through our faithfulness, who the beautiful, young and assured women in our families and in our communities. Next, we have what is perhaps the patronal and titular title of this festival and it is “Reyna de las Flores—Queen of Flowers.” Throughout the Catholic world, our Blessed Mother is honored and crowed with beautiful, fragrant and colorful flowers each year, during the month of May. Next in line, is the title of “Reyna Abogada–the Defender of the Poor and the Oppressed.” You and I, in our lives of faith, often implore the intercession of Mary, as we know her to be not only “mother” but as the “protector” of the poor, the oppressed, downtrodden; all those who are in need of God’s grace, mercy and love. Mary, in the next title of the procession is “Reyna Justicia–Queen Justice.” As the Mother of God, Mary is the very personification of justice, truth and understanding and all of this, under her Son, Jesus who, as the second person of the Holy Trinity, is the God of Justice and Truth.

The next three titles are, perhaps, what our festival represents for and among us, “the three greatest and lasting things,” and each being a theological virtue, i.e. Faith, Hope and Love. These titles are “Reyna Fe,” “Reyna Esperanza” and “Reyna Caridad.” Caridad actually means Charity, which is love, in all our actions. Concluding the titles in the procession is “Reyna Elena—Queen Helen,” who found the True Cross, relics of which are still venerated in several churches throughout the Catholic world. St. Helena certainly knew of and believed in Jesus and His mother, Mary. One final note, the Greek Orthodox Church in Honolulu is entitled and under the patronage of Saints Helena and Constantine. It is fitting, kababayan, that our Barrio Fiesta, was founded upon and continues to be celebrated with a spiritual, religious and faith-filled foundation. May these titles, which we identify as realities that the Blessed Virgin Mary represents for us, inspire and motivate us, as we plan for the 51st Annual Barrio Fiesta. “Pray for us O Holy Mother of God.” 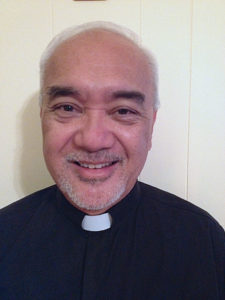