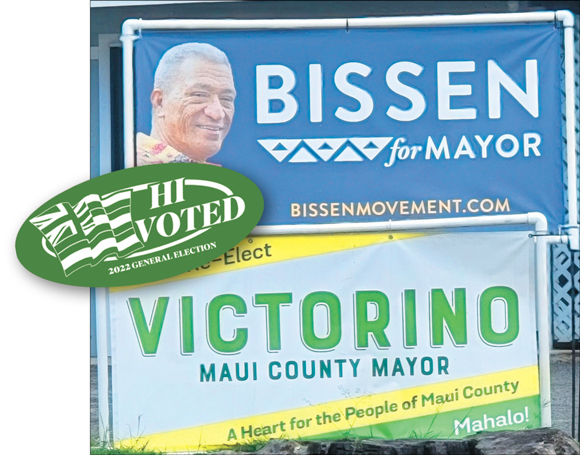 Delayed initial results provided the only bump for the Bissen Movement claiming victory in the Maui Mayoral race. When the first printout posted at 9 p.m., Retired Judge Richard Bissen opened a 5,000-vote lead over incumbent Mayor Michael Victorino. The second printout at 9:40 p.m. increased Bissen’s clearly insurmountable lead to 6,500 votes. The third printout posted on November 9 at 12:12 p.m. indicated Bissen collected 59.7 percent (31,302 votes) to Victorino’s 37.6 percent (19,694 votes)—a difference of 11,608 votes—with only 1,374 blank votes while forty-five people voted for both of them.

The turnout for Maui County’s 114,841 registered voters again lagged behind the rest of the state. Only 52,431 voted (45.7 percent), mostly by mail (50,101). Only 2,330 voted in-person. (The current information from the State of Hawai‘i Office of Elections website does not indicate how many voted in person on Election Day versus the walk-in period.)

But Election Day voting again led to the later than scheduled release of results. At about 6:30 p.m., many voters still waited at the Velma McWayne Santos Center in Wailuku—the only Voter Service Center (VSC) open on Election Day in Maui (in a vote by mail system, VSCs are designed to accommodate voters with disabilities and others who might have trouble voting without assistance more than to serve as a traditional polling place).

Like the Primary Election, Maui received the dubious honor of having the last person vote. At 8:18 p.m. (more than one hour after the closing of the polls at 7 p.m.), the last person exited Maui’s polling center and was interviewed by Hawai‘i News Now’s Maui-based reporter Chelsea Davis. In a brief interview, Davis learned he was a first-time voter, as he had just reached voting age. (Unfortunately, Davis didn’t ask him why he didn’t mail his ballot in or why he waited until the last day to vote in person.)

In addition to the results from the Mayoral race, political pundits closely watched the County Council races. With both Kelly King and Michael Molina running for Mayor, the South Maui and the Makawao-Ha‘ikū-Pā‘ia seats became vacant (King and Molina were unsuccessful, placing third and fifth, respectively, in the Mayoral primary. King later endorsed Bissen).

For the Molokai Council seat, part-Filipino incumbent Keani Rawlins-Fernandez received 25,396 votes (48.5 percent) to resident manager John Pele’s 18,758 votes (35.8 percent)—a difference of 6,638 votes. There were 8,226 blank votes and thirty-five double votes. (With Cook and U‘u-Hodgins winning, Pele was the only one of three candidates endorsed by the super PAC Be Change Now who lost. Rawlins-Fernandez was endorsed by the ‘Ohana coalition/Maui Pono Network/‘Onipa‘a 2022.)

For the West Maui Council seat, incumbent Tamara Akiko Maile Paltin received 33,734 votes (64.4 percent) to bartender Justin Hermmann’s 9,887 votes (18.9 percent)—a difference of 23,847 votes. There were 8,763 blank votes and thirty-one double votes. (Paltin, who was endorsed by the ‘Ohana coalition/Maui Pono Network/‘Onipa‘a 2022, received the most votes of any Council candidate.)

For the Kahului Council seat, incumbent Tasha Kama received 24,074 votes (45.9 percent) to Maui Soda sales and marketing manager Buddy James M.A. Nobriga’s 20,384 votes (38.9 percent)—a difference of 3,690 votes. There were 7,912 blank votes and forty-five double votes. (During the primary, the Kahului seat had the most candidates–seven–of all Council races. The five other candidates in the primary garnered 15,225 votes, with 6,459 blank votes. The ‘Ohana coalition backed candidate Carol Lee Kamekona did not make it out of the primary.)

For the Lāna‘i Council seat, incumbent Gabe Johnson received 23,452 votes (44.7 percent) to former Council member Riki Hokama’s 20,671 votes (39.4 percent)—a difference of 2,781 votes. There were 8,246 blank votes and forty-six double votes. (The second printout had Johnson leading by only 202 votes; Johnson’s sign waving in the afternoon on Election Day near the Velma McWayne Santos Center—close to his stand-up sign and Sinenci’s stand-up sign—may have swayed some last-minute voters. Johnson who lost to Hokama in two prior elections was endorsed by the ‘Ohana coalition/Maui Pono Network/‘Onipa‘a 2022.)

For the East Maui Council seat, incumbent Shane Sinenci received 25,285 votes (48.2 percent) to Claire Kamalu Carroll’s 19,101 votes (36.4 percent)—a difference of 6,724 votes. There were 7,977 blank votes and fifty-two double votes. (This was the third time they faced each other. Carroll is the daughter of former Council member Robert Carroll, who retired in 2018. Sinenci, who is part-Filipino, was endorsed by the ‘Ohana coalition/Maui Pono Network/‘Onipa‘a 2022.)

For the Wailuku-Waihe‘e-Waikapū Council seat, incumbent Alice L. Lee received 22,682 votes (43.3 percent) to acupuncturist Noelani Ahia’s 22,178 votes (42.3 percent)—a difference of 504 votes. There were 7,518 blank votes and thirty-seven double votes. (This was the closest race of all Council races. Ahia was endorsed by the ‘Ohana coalition/Maui Pono Network/‘Onipa‘a 2022.)

The ‘Ohana coalition/Maui Pono Network/‘Onipa‘a 2022 appears to have lost the majority on the Council with only four of its endorsed candidates winning: Rawlins-Fernandez, Sinenci, Paltin, and Johnson. And then again, coalitions/endorsements can change. For example, Kama was endorsed by the progressives in 2018 and beat former Mayor Alan Arakawa for the Kahului seat but later showed her independence in voting to retain Corporation Counsel Pat Wong. And when King was removed as Council Chair, Lee gathered enough votes—including those of the progressives—to become Council Chair.

(The ‘Ohana coalition/Maui Pono Network/‘Onipa‘a 2022 fared much better in advocating voting yes on all thirteen Charter amendments, which all passed.)

Between now and January 2, 2023 (when the Mayor and the Council members will begin their terms of office), there will be a lot of behind the scenes maneuvering.

Who will Mayor-elect Bissen appoint to his cabinet? Will his cabinet be reflective of Maui’s ethnic diversity and include Filipinos? (For those interested, email your resume to aloha@bissenmovement.com or mail it to P.O. Box 3083 Wailuku, HI 96793 or call 1-833-4 BISSEN for more information.)

And at the Council, will Lee continue as Council Chair?

While the Mayor will have four years to convince voters to reelect him, all Council members will face reelection in 2024. 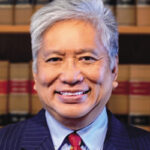