On the third Sunday of January, Filipinos gather in Cebu and throughout the world to pay homage to the Santo Niño, which is Spanish for Holy Child. The celebration begins with nine days of novena and ends with the Sinulog.

Here on Maui, the Sto. Niño Club of Maui will resume the full celebration after a two-year hiatus due to the pandemic during which only the novena and a limited mass were held, according to Theresa Dela Calsada Malapira, the president. Other officers include Vice President Elenita Diaz, Secretary Theresa Sotto, Corresponding Secretary Liezl Oandasan, Treasurer Julna Iraha, Assistant Treasurer Ben Diaz and Auditor Rosita Pono. Malapira explained the organization, which has a 501(c)(3) tax exempt status from the IRS, began in 1962 in the plantation camps in H’poko, primarily as a mutual aid organization. “I’m excited because this Fiesta is a grand celebration. This is the biggest event for our organization and this year will be our 61st Annual Fiesta.” (Lāna‘i will have its celebration on January 22, beginning at 5 p.m.)

Oandasan, a past president, was tapped to be the lead organizer of the festivities. “The nine days of novenas started on January 6 at Christ the King Church. On Sunday, January 15, we will have a mass at 3 p.m. at Christ the King followed by a Fiesta at Kīhei Community Center at approximately 5:30 p.m.”

Malapira says the Fiesta will begin with a procession around the exterior of the community center followed by the Sinulog dance with over a dozen dancers. “The Sinulog dance is a celebration of the Christianity of the natives,” she explains. “Later, everyone will be invited to bring their Santo Niño to dance along with the Sinulog music. An offering of flowers will also be part of the program. And yes, there’s food! Donations are accepted but not required. It’s not only for the Visayan community but for Tagalogs, Ilocanos and even local folks because it really is a celebration of Christianity.”

Rajah Humabon later decreed the neighboring chiefs to provide supplies to Magellan and to convert to Christianity. Datu Lapulapu from the island of Mactan opposed Rajah Humabon and Lapulapu refused to recognize Spain and convert to Christianity. At Humabon’s urging, Magellan and a small group of his men traveled to Mactan, hoping to convince Lapulapu. But a battle ensued and on April 27, 1521, Magellan was killed. Magellan’s men who survived returned to Cebu and some of them were poisoned by Humabon, who then ordered the remaining Spaniards to leave immediately. The survivors reached Spain in 1522.

The Christianization of the Philippines was placed on hold until the next Spaniard conquistador Miguel Lopez de Legazpi arrived in Cebu in April 1565. Legazpi’s crew found the image of the Santo Niño in a burning house, still inside a wooden box. Legazpi believed it was the same one Magellan gifted to Humabon and Humamay and ordered the Santo Niño be placed in the first church built in the Philippines. A church was built on the site and named El Santisimo Nombre de Jesus (The Holy Name of Jesus), which is now the Basilica Minore del Santo Niño de Cebu.

A plaque at the Basilica reads: The Church and Convent erected by the Augustinian Fathers under the Rev. Andres Urdaneta in 1565 were the first established in the Philippines. Both were burned down on November 1, 1566. The second church was likewise destroyed by fire in March of 1628. But rebuilt soon after (1628–1629) under the administration of the Historian Rev. Juan Medina, O.S.A. The present massive church was designed and constructed during the priorship of Rev. Juan Albarran, O.S.A. (1735–1737). The Santo Niño, venerated in this church since the time of Legazpi, is the center of intense devotion and religious pilgrimages throughout the Visayas.

Nearby is The Cross of Magellan, where a plaque reads: From time immemorial this spot has been set aside to commemorate the erection of a cross in Cebu by the expedition of Magellan. When King Humabon of Cebu and his Queen, son and daughters, together with some 800 of their subjects were baptized by Father Pedro Valderrama. This hallowed site was improved in 1735 by Rev. Juan Albarran, Prior of San Agustin and in 1834 by Rt. Rev. Santos Gomez Marañon, Bishop of Cebu. The image of Santo Niño found by the expedition of Legazpi in a house near the present site of the Cathedral of Cebu is venerated by the faithful in the nearby Church of San Agustin.

In 1575, the Santo Niño was apparently brought to Spain as booty to the King of Spain—and then somehow returned to Cebu. During World War II when the Japanese occupied the Philippines, Father McHugh and Father Moran hid the Santo Niño in the hills.

Initially, the Feast of the Santo Niño was celebrated in April but later the celebration was moved to the third Sunday of January, with the largest celebration held in Cebu. Thousands of folks, including Maui residents, congregate in Cebu during that time.

“In January 2012, I joined a pilgrimage organized by Fr. Efren Tomas of Christ the King Church. Our pilgrimage’s itinerary included visits to Manila, Bohol, Palawan and Cebu,” recalls Lucy Peros. “Our pilgrimage was timed so we could join the Sinulog Festival in Cebu in mid-January. When Fr. Efren was recruiting us for the pilgrimage, he told us about the excitement of the Festival and a little about the religious and cultural significance. I was inspired to do my own research and learned how the Santo Niño came to the Philippines.”

Madelyne Pascua was part of the same pilgrimage. “The day of the Sinulog, which is celebrated on the third Sunday of January is an experience I will never forget,” Pascua says. “The streets were filled with millions of spectators to watch the parade. The parade was endless with groups from all over the different cities and provinces to partake in this long-time event which started in 1980. The parade ended at the Cebu City Sports Center where groups competed with a ten-minute dance presentation. Beautiful elaborate costumes from Barong, Terno, Maria Clara, and native costumes. Their performances were accompanied by the sounds of live music.”

Like other tourists and residents, the pilgrimage visited the Basilica Minore del Santo Niño (Church of San Agustin). “The original Santo Niño is housed there. I tried taking a photo but I was too far and the photo came out dark,” says Peros.

Pascua says they attended “the most uplifting mass I ever attended at the Santo Niño Basilica. Devotees sang and waved their hands to the song Bato-Balani sa Gugma (Magnet of Love), while raising their own replicas of the image of the Santo Niño. Although, I didn’t understand the language it was sung in, I felt the presence of Santo Niño, Jesus and God.”

Having a replica image of the Santo Niño is part of Filipino culture, especially for Catholics. Even Jokoy, who grew up with a Santo Niño in his living room, made the Santo Niño play a significant role in his movie “Easter Sunday,” released in 2022. Although the Santo Niño was part of an ongoing joke questioning “What is that thing?” throughout the movie, in the end the Santo Niño helped to protect and save Jokoy’s family from the evil forces.

For Peros, seeing the original Santo Niño was a blessing. “This was more than a chicken skin moment because this was part of the beginning of Christianity in the Philippines. I felt so privileged to be there. I was in awe to be one of the thousands of people to be there. Even though we were packed like sardines, none of us were bothered by it.” 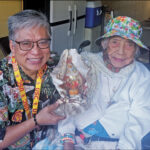 Alfredo G. Evangelista was baptized at Holy Family Catholic Church in Pu‘unēnē on October 26, 1958 because there was no Aglipayan Church on Maui until the following year. When the Rev. Timoteo P. Quintero of the Philippine Independent Church began having monthly services in September 1959 at the Church of the Good Shepherd (Episcopal), Evangelista and his family began attending the Episcopal church which was in communion with the Philippine Independent Church. When Evangelista came home to Maui in 2010 after living on O‘ahu for 27 years, his Mom Catalina gifted him with a Santo Niño.