This day in history will forever be remembered as a remarkable one. From the runoff election in Georgia to the counting of electoral votes and a violent visit to the United States Capitol by enraged political followers, January 6th, 2021 was anything but tranquil.

Amid claims of a fraudulent election stemming all the way from November until this point in time, President Trump continues in his tirade criticizing the authenticity of the 2020 election. As expected, his supporters followed suit.

As Congress counted the electoral college votes for the Presidential Election, pro-Trump protestors stationed in Washington D.C. stormed the Capitol in opposition to Joe Biden’s anticipated ceremonial declaration as president-elect. Armed and dangerous, a mob of protestors breached layers of security and got onto the Capitol floor, some calling the event an attempt of a coup d’état, the overthrow of an existing government, which in this case is the incoming Biden administration.

In response to their entrance, the U.S. Capitol was placed on lockdown. During the destructive raid of the Capitol, House and Senate floors were locked with the House being evacuated by police. The mob’s abrupt entrance put a pause to the ceremonial counting of the electoral votes. The protesters were said to have been in possession of hate symbols such as the nazi and confederate flags and waving around gestures of white supremacy.

President Trump released a video urging the protesters to go home, though staying true to his claims of election fraud.

“We had an election that was stolen from us. It was a landslide election and everyone knows it—especially the other side—but you have to go home now,” Trump stated in a video released via his social media.

Since its release, social media sites were quick to take action against Trump’s recurrent false claims of fraud. Facebook took the video down and Twitter suspended Trump’s account for 12 hours, warning of permanent banning if further misinformation is promoted.

Trump was not the only prominent political figure who released remarks on the event. Former President George W. Bush and President-elect Joe Biden both released statements condemning the President and his supporters’ conduct.

“It is a sickening and heartbreaking sight. This is how election results are disputed in a banana republic—not our democratic republic. I am appalled by the reckless behavior of some political leaders since the election and by the lack of respect shown today for our institutions, our traditions and our law enforcement,” said President George W. Bush. 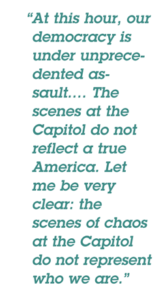 “At this hour, our democracy is under unprecedented assault.… The scenes at the Capitol do not reflect a true America. Let me be very clear: the scenes of chaos at the Capitol do not represent who we are,” said President-elect Joe Biden
As of Wednesday night, the Capitol was deemed secure from protestors and the proceedings of the counting of the electoral votes continued. Though now seemingly back to normal, it is clear to many this event might just be the start to even more chaos. This attack on the Capitol is symbolic of the partisanship fostered throughout the past four years in which progress as a united country was looked down upon by some.

While what happened on January 6th at the Capitol was an extraordinary event that hasn’t happened in the country in centuries, there is still light at the end of the tunnel as new leadership continues to move into the U.S. federal government. In addition to Biden’s win, Democratic candidates Jon Ossoff and Reverend Raphael Warnock were up for U.S. Senate seats in the Georgia runoff election. Their wins signal the imminent change in the policies put in place, a change the United States may need in these times. In the near future, there is much to look forward to as the United States continues to shift its priorities towards unification, healing and advancement as a society. 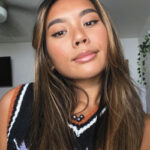