Called to Serve and Chosen to Journey With You

A new pastor serves at St. Theresa Church in Kihei.

As he reflects on his “life and faith” journey, Fr. Arnel M. Soriano, M.S. unhesitatingly names Catholic school as the most powerful influence on his vocation to the priesthood. “My teachers, the La Salette Missionaries, were close to my family and visited us in our home,” Fr. Arnel says. “I was active in school and church activities at the parish, but the community within my Catholic school was the strongest influence.” On July 1, 2021 Fr. Arnel officially joined our faith community as St. Theresa’s new Pastor. He was born in Ramon in the province of Isabela in the Philippines on Feb. 9, 1972. Within his family, there are five girls and five boys, and Fr. Arnel is the youngest of the boys. “I was raised in a rice farming family,” Fr. Arnel says. My family is Catholic, and my grandmother was especially religious. As a child my mom would always bring us to church. I was an altar server, so I encountered many La Salette priests.” After graduating from La Salette of Ramon in 1989, Fr. Arnel attended Central Luzon State University, where he received his Bachelor of Science in Business Administration in 1993. “In the seminary, I studied philosophy at the St. Paul Foundation run by the Pauline priests,” Fr. Arnel says. “Then I studied theology at San Carlos Graduate School of Theology run by the Archdiocese of Manila and also in the Philippines.” Fr Arnel was ordained on May 4, 2004, then he was the assistant at St. James Parish in Santiago City, Philippines for approximately a year before transitioning to serving faith communities in Hawai‘i. “I have been assigned to many islands in Hawai‘i, but not Maui,” Fr. Arnel says. “Transitioning to Hawai‘i was not hard for me, but the language was difficult, although I learned English in the seminary.” Every year, Fr. Arnel goes back to the Philippines to visit his family during vacation. He loves reading, dogs and gardening. “Gardening is what really interests me right now,” Fr Arnel says. “It makes me feel productive. We are in a tropical place, so I mainly grow tropical plants and traditional Filipino vegetables like squash and eggplant.” As he begins serving St. Theresa’s faith community, Fr. Arnel looks forward to meeting new people, forming new friendships, and learning alongside the parishioners as “co-journeyers” in our faith. “I will try my best as your Pastor, and I hope to be your prayer partner and to journey with you in your spiritual growth,” Fr Arnel says. “I hope you will help me in my spiritual growth as a priest.” Let us join as a “life and faith” community in welcoming Fr. Arnel as our new Pastor!

The final act in the assignment of a new Pastor is the rite of installation, performed by the Bishop during a Mass at the parish where the priest is named Pastor. Parish administrators are usually not installed. The Order of Installation, which is found in the church’s Book of Blessings, involves a presentation of the new pastor, his staff and parish council to the congregation and the pastor’s “Profession of Faith and Oath of Fidelity.” The profession and oath consists of the Nicene Creed and a promise to adhere to church teaching. The document is signed on the altar by the new pastor and by the Bishop as chief witness, and lists both the date of appointment and the date of installation.

In the Ilokano language (followed by an English translation), Fr. Arnel has a brief message:

(My Brethren and friends here in the County of Maui, let us unite and pray to our Lord God Almighty, for He saves us from all harm and protect us from this danger.

And by the power of our faith to Him, this COVID 19 will disappear so that peace, love and unity to all will reign, and his love for us will remain. Brothers and Sisters, it is my joy and privilege to serve you all.

And may the peace of Christ, and the Love of God the Father, with the Holy Spirit be with you and remain with you.)

Thank you Fr. Arnel for your Life and Faith commitment to our families at St. Theresa and to the County of Maui. We are truly Blessed! 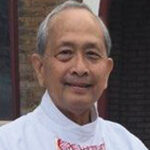