Actress Sarah Jessica Parker said growing up in a big family taught her a lot of problem solving and how to share and compromise. Congolese American former professional basketball player, Dikembe Mutombo also said he came from a large family but he was not raised with a fortune. Something more was left him and that was family values. Pope John Paul II said a family that prays together, stays together.

The family of this month’s Sakada Offspring truly fits in all the categories mentioned above. Mark Anthony Felipe is a grandson of a Sakada couple who raised eight children, four boys and four girls in the plantation camp of Maui.

Mark is married to Ester Cortez Felipe. She works in the Purchasing Department at Hale Makua in Kahului. Their team provides supply needs to each of the campuses like Hale Makua Kahului and Wailuku, Home Health Care Home. They also process hundreds of invoices. They have three children. Their first son Barton William Kala‘iolele Cortez Felipe works at HMSA. He attended Hawai‘i Pacific University with a Bachelor Degree. However, HMSA has partnered with company called Firstsource Solutions Limited. Firstsource provides business process management in the banking and financial services, customer services, telecom and media and healthcare sectors. At present, Barton transitioned to a new role with Firstsource. The client he is currently working for is HMSA. His job title is Business Specialist and his duties include meeting with business clients to discuss operational challenges, evaluating business data to identify areas of opportunity and helping clients to optimize business strategies. Their second son, Nolan Andrew Kaleleonapa‘a Cortez Felipe works for Culpepper and Associates, Inc. His station is called Warning Point, working in an emergency call center where he monitors CCTV, alarm, radios, weather etc. and sends notification and dispatch units for Pearl Harbor Naval Shipyards under the guidance of Pearl Harbor’s emergency management division. He was in the U.S. Navy for four years. Their daughter Jaimelee Grace Kai‘ulani Cortez Felipe is a Junior at Davidson College in North Carolina majoring in Physics. She hopes to graduate in 2023.

Mark is involved in sports as coach for Little League, Broncos League, High School such as Seabury Hall. He enjoys fishing as a hobby. He and Ester are very active members of Christ The King Church. Ester is a very dedicated Religious Education teacher at the Church.

Mark came from a large and very close-knit family. His father, Florendo “Pete” “Siso” Felipe was one of the eight children of the late Sakada Fernando and Maxima Felipe who originally came from Camiling, Tarlac, Philippines. Fernando came to Hawai‘i as a recruit to work in the plantations of Hawai‘i in 1927.

Upon arriving on Maui, Fernando worked at Hawaiian Commercial & Sugar Company (HC&S). He lived at Kekania Camp, a camp located between Pulehu and Keahua Camp. Keahua Camp was located just below where Pukalani is today with some remnants of coconut trees to the left side of the turn off to Hli‘imaile Road. Fernando lived there with other old timer Sakadas. His jobs at HC&S consisted of irrigation, cutting grass and other labor work.

In 1929, Fernando decided to go back to Camiling, Tarlac to marry the former Maxima Ramos. After their wedding, they came back together to Hawai‘i. Fernando and Maxima were one of the first married couples who lived and raised their families in the plantation camp. They then moved to Keahua Camp when their children were of school age. There was also a Catholic Church in Keahua, the Immaculate Conception Church where the Felipe family attended mass. All the Felipe children helped cleaned the church. This is one of the churches where the late Monsignor Osmundo Calip began to evangelize the camp people which began the formation of the Filipino Catholic Clubs here on Maui in 1949.

Fernando and Maxima Felipe were blessed with eight children (four boys and four girls), thirty-two grandchildren, forty-eight great grandchildren and thirty-four great great grandchildren. They had a very hard life according to one of their daughters, Sister Marcelina Felipe, CSJ. To help with the family finances, Maxima would make and sell Filipino desserts like suman, cascaron and twisted donuts. They raised their own vegetables and sold the extras. They raised animals such as pigs, goats, chickens and cows for their consumption as well as for sale. They slaughtered those animals to sell to other people in the camp. This is often pre-ordered and it’s called oraga. They washed clothes for the single men in the camp to earn extra money. Maxima also worked in the fields at HC&S. While she was at work, their oldest daughter, Virginia would become the mother in charge of the younger siblings. Although they were poor with money, they were rich in love.

Sister Marcelina is a religious with the order, Sisters of St. Joseph of Carondelet. On April 5, 1991, Sister Marcelina’s dream of becoming a Missionary Sister became a reality. She headed for Talca, Chile, South America as a missionary. She was scheduled to stay there for three years but God had other plans for her. She stayed and served the people in Chile for nineteen years. She did pastoral ministry for ten years in the pueblo called Curepto, Chile, located on the West Coast of Talca. After her sabbatical in 2002, she returned to Chile to start a new mission at the ecological and spirituality center in Vilches (Centro de Ecoligia y Espiritualidadde Vilches). This is a healing center located at the foothills of the Andes Mountains. Besides praying, gardening, visiting and listening to the people’s stories, her ministry was Spiritual Accompaniment to the women in Sauce Prison. She also visited the men’s prison in Talca. Sister Marcelina recently celebrated her 60th Anniversary as a Sister. She now lives in Honolulu.

The Felipes were a happy family especially when they got together when Fernando played his kutibeng, a Filipino stringed instrument. He was also a talented accordion player.

Fernando was a member of the 3rd Battalion, First Regiment of Maui Volunteers, U.S. Army Defense Forces, Central Pacific area. This was the forerunner of the Hawai‘i National Guard.

According to Sister Marcelina, their mom Maxima was a very religious woman. In their old plantation house, Maxima had an altar with lots of statues and a beautiful picture of the Sacred Heart of Mary. Every morning she would light a vigil candle and pray for protection and guidance during the day. She had great reverence for the ancestors and God’s holy presence in Mother Nature. Every night she would say her rosary and pray her prayers in Ilokano. She memorized all her prayers because she didn’t know how to read or write. She had a great desire, however, to learn how to read according to Sister Marcelina. So Sister bought her Mom an Ilokano Bible with large print. She learned how to read eventually with Sister Marcelina’s help. Both Fernando and Maxima did not complete grade school. The Felipe children helped Fernando when he was studying for his U.S. citizenship so he could pass the test. Although Fernando and Maxima did not have much education, they encouraged all their children to do well in school. They all did!

Mark shared these very touching comments about his grandparents, Fernando and Maxima Felipe: “My Apo Guys (grandparents) were very nice to me. I only had my Apo Lakay (grandpa) for 10 years of my life. He would chase me around the house, show me not to be afraid of animals and talked to me in Ilokano (I couldn’t understand). My Dad said I was Grandpa Fernando’s pride and joy because I was the first grandson born with the Felipe last name. He told my Dad that now his name Felipe, will live forever.” 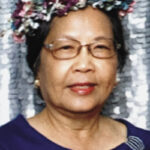 Lucy Peros is a retired schoolteacher, having taught at St. Anthony Grade School and Waihe‘e Elementary School. Both of her late parents, Elpidio Cachero Cabalo (a 1946 Sakada) and Alejandra Cabudoy Cabalo of Hli‘imaile, worked for Maui Land and Pine Company. Lucy now enjoys retirement and has time to join other seniors in the Enhance Fitness Program under the Department of Aging three times a week. She also attends the line dancing class and other activities at Kaunoa Senior Center and joins other Waihe‘e School retirees when help is needed at the school. Lucy also devotes some of her time to activities at Christ The King Catholic Church. She enjoys writing and reading in her spare time.