American business magnate co-founder of Microsoft Corporation Bill Gates says personal computers have become the most empowering tool we’ve ever created. They’re tools of communication, they’re tools of creativity and they can be shaped by their user. However, the late President John F. Kennedy said that man is still the most extraordinary computer of all.

Conrado Cortez, a Sakada Offspring, is one of those men. He is an extraordinary computer whiz and an extraordinary person who is called upon by churches, community people etc. to help with their individual computer work and computer trouble shooting, etc. 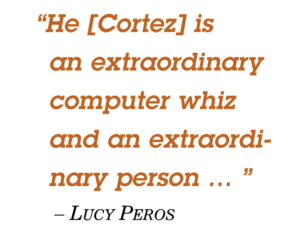 Conrado is married to Carolyn Cortez. She works at the Planning Department at Maui County. They have two daughters, Caitlyn and Cassidy. Caitlyn is a 3rd Grade Teacher at Lunalilo Elementary School in Honolulu. She graduated from the University of Portland with a Bachelor of Arts in Elementary Education.

Cassidy is a civil engineer at Fukumoto Engineering Inc. in Wailuku. She graduated from Portland State University, with a Bachelor of Science in Civil Engineering.

Conrado works for Akimeka, LLC currently as Business Objects Engineer since 2003. Conrado is not active with any specific community organizations, however, he volunteers anytime to assist with various organizations whenever he is called upon. He is a jewel of Christ The King Catholic Church in Kahului. He does a lot for the church with a loving heart. He calls himself “Computer Geek at heart.” 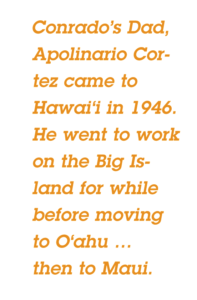 Before coming home to Maui to work, Conrado worked at Kamehameha Schools on O‘ahu in the IT Department as a programming manager. He worked there over nine years. Before that, he worked as a lead programmer at Food Pantry and supervised the data processing center at CPM & F, Inc., all on O‘ahu.

Conrado’s Dad, Apolinario Cortez, came to Hawai‘i in 1946. He went to work on the Big Island for a while before moving to O‘ahu with relatives and then to Maui after marrying his wife, Nellie.

Conrado’s maternal grandfather, Leandro Paet, was also a 1946 Sakada. When he arrived on Maui, he worked with HC&S until he retired in the late 1960s.

When Apolinario moved to Maui, he stayed with relatives who lived in Pu‘unene with Leandro. It was then that Apolinario saw a picture of Nellie which was displayed by Leandro. Apolinario told Leandro that he has a beautiful daughter. It was then that he asked Leandro if he could date his daughter when he went back to the Philippines. Leandro told Apolinario no because he wants her to finish college first. But when Apolinario went to the Philippines in 1956, ignoring Leandro’s warning, he went to meet Nellie, love at first sight, proposed to her and eloped. After a few weeks later, Apolinario came back to Hawai‘i.

Apolinario even went to Kwajalein to work until 1960. In 1960, Nellie came to follow him to Hawai‘i. When he came back from Kwajalein, Apolinario worked as a carpenter at Royal Lahaina Hotel and Hale Pauhana. He also worked in the same hotel as a bell boy with his Sakada friend, Ben Molina. At age 55, Apolinario retired as a carpenter but went back to work for Kama‘ole Sands and at Embassy Suites where he retired at age 62.

Conrado had this to say about his grandfather Leandro. “My grandfather was very caring and protective. He took care of us when mom and dad were working. He’d be there to pick us up from Lihikai School. He would take us to Noda Store to buy rotiserrie chicken and have it for lunch-just the both of us. I also remember that when he picked me up and my sister from Lihikai School, my grandpa would always have my sister’s baby bottle (refered to as ni ni) even though she was already in Kindergarten.”

According to Conrado, his Dad’s goal for his children was always school first and instilled in them the values of respect especially with the elders, hard work and being good citizens. He worked hard (physical hard jobs) and wanted his children to have a better and much easier life than he did. Conrado also added that if he was still here today, he would be so proud of seeing his two oldest grandkids in professional jobs because it was his dream fulfilled in him, his sister and now his two older grandkids. He would also be encouraging his sister’s kids to follow in the older grandkids’ footsteps. “It is sad that he passed away before he could see them graduate from high school and college,” Conrado says.