Some hoped to complete the session early but a pandemic doesn’t operate on a timetable.

A wry Chinese curse is “May you live in interesting times.”

With Maui’s larger dependence on the Visitor Industry, we may well all be living those trials right now.

As a young man, I entered public service at a weighty moment. In 1995, I left private legal practice to work for Governor Benjamin Cayetano at the Department of Land and Natural Resources (DLNR). Following statehood, Hawai‘i’s economy enjoyed steady and extended growth, fueled by tourism entering the jet age and construction rushing to accompany that expansion. There was a lot of optimism. After a quietly yeoman’s job of stewardship by our first American of Japanese Ancestry Governor George Ariyoshi, John Waihe‘e III (our first Native Hawaiian chief executive) had overseen eight years of new initiatives.

The Cayetano team came in expecting to pursue our own list of public programs. But instead of pursuing the major planks of his campaign, we confronted an economic downturn. The Governor, after trying other ways of filling the fiscal holes, eventually implemented the first reduction-in-force of the government workforce in memory. By the end of his eight years, the Governor had also presided over strikes by both the teachers’ union and the University of Hawai‘i professors, and relations with the other public unions had grown icy. Four decades of Democratic Party Governors would end with the 2002 election.

I moved home to Maui and eventually went back to private practice in Wailuku.

I returned to government in 2009 near the end of the Republican interregnum, appointed by Gov. Cayetano’s successor to fill the late Bob Nakasone’s final term in the State House. Through the grace and forbearance of Central Maui’s voters, I’ve had the privilege of serving in the Legislature since then. While we’ve dealt with budget challenges and controversial social issues, the State generally has persevered each term.

On March 16, 2020, however, something unprecedented occurred. The Legislature recessed its session indefinitely due to the growing COVID-19 pandemic. The Hawai‘i Constitution envisions the House and the Senate to meet annually for up to sixty floor days—with recesses, weekends and holidays, that usually means a session starts on the third Wednesday of January and ends on the first Thursday in May.

As the impacts have spread and widespread stay at home orders issued locally, over a hundred thousand Hawai‘i workers have been laid off or furloughed from restaurants, hotels and retail stores and from businesses large and small dependent on the visitor industry. The University of Hawai‘i moved to online instruction after Spring Break and the Department of Education finally decided to also pursue online classes.

Senate President Ron Kouchi, who was County Council Chair when hurricanes hit Kaua‘i and Ni‘ihau, understands that elected officials need to recognize their most appropriate roles. In disaster response, the main thing is identifying where you can provide the most valuable assistance. Sometimes that means talking bluntly. And harder, realizing when your initial instinct to simply speak out or complain in public is not as helpful as making a quiet suggestion.

One of the last actions the State Senate did was to move the Governor’s emergency funding request for initial COVID-19 responses. Having served at the Department of Labor and Industrial Relations (DLIR), I found it curious that no funding was required for unemployment insurance services. With some gentle prodding of the Department and the Governor’s office, the Administration and DLIR did begin to put together a package to handle UI claims before we recessed. At the cajoling of legislators, DLIR also waived the usual waiting period for UI benefits and relaxed the available for work requirements (the weekly attempt to contact three employers for job placement). Unfortunately, the sheer amount of UI claims surpassed the ability of the DLIR intake system and required DLIR to add a call center and additional resources simply towards accepting and processing the claims.

Interestingly, the Governor and most of the County Mayors exempted a number of businesses as essential, including groceries and other food establishments that provided relatively modestly compensated blue-collar workers. In fact, blue-collar construction trades and repair and maintenance jobs—both private and public—also received the essential label. Almost all other retail businesses, recreational and entertainment and service work were asked to close.

Disasters can bring out both the best and worst in people. Costco lines. Toilet Tissue and Paper Towel hoarding. The usual skeptics, cynics and conspiracy theorists (i.e., it’s just a flu; how is the government gonna enforce its lockdown orders; Matson and PASHA stopping shipments).

At the National level, a usually bitterly partisan Congress passed a trillion dollar relief package in the Coronavirus Aid, Relief, and Economic Security (“CARES”) Act. The package included an extension of the unemployment benefit and additional benefits for the lowest paid workers. CARES also makes independent contractors and the self-employed eligible for UI benefits.

CARES is expected to provide—based on population—approximately $1,250,000,000 for Hawai‘i COVID-19 relief, with 45% of the amount allocated to the City and County of Honolulu. The Governor will be working with legislators to determine the best way to spend the State’s allocation and to distribute portions of that funding to the smaller Counties.

Without active military bases and major industrial-commercial businesses, Maui depends more on the Wailea and Kaanapali-Kapalua resorts and some construction than the other major islands for our fiscal health. One of the starkest images of the pandemic impact on Maui are the rows of idle rental cars parked on fields surrounding Kahului Airport. Maui, before the outbreak and without a fully developed public transportation system to the resort areas in South and West Maui, annually rented more vehicles than any other island, including O‘ahu. The thousands of parked cars illustrated the impact of shutting down the visitor business.

Two days after flying home, although asymptomatic, I began a fourteen day self-quarantine when I was informed that one of my State Senate colleagues had tested positive for the novel coronavirus. With a ninety-one year old mother that I usually see daily, it was a long two weeks. On the bright side, I had my younger sister shopping and running errands for me.

Since recessing, I’ve been working remotely—either from home or my Wailuku law office—relying on conference calls and zoom meetings with various groups. I’ve also been monitoring and commenting to colleagues in realtime the on-going work of the Senate Special Committee on COVID-19 which has been providing oversight of the administration’s response. During the course of those hearings, the administration moved finally to a broader stay-at-home lockdown and quarantining air travelers arriving in Hawai‘i or flying inter-island. It also revealed that the administration had not determined which state employees were essential, which ones could telework or digitally perform at home, and which ones would not be allowed to report to work but were incapable of performing their jobs remotely.

One of the greatest resources being tapped both statewide and in our county have been the capacities of our non-profits. The Hawai‘i Community Foundation (HCF) with the Omidyar Foundation and other donors opened a Hawai‘i Resilience Fund to quickly provide grants—one of the first was to provide mobile testing for O‘ahu’s homeless camps. In addition, the HCF Strong Fund—separate pots for each island—are also available to provide recovery funding. Mayor Mike Victorino tapped former Mayor Kimo Apana and the Maui Chamber of Commerce and workforce development point Linda Puppolo to come up with various efforts, including a local produce distribution for farmers who had been growing for Maui’s shuttered restaurants and hotels, and a job training and development website.

As I write this column, the Legislature may not return to complete the session. The Legislature adopted a two year operating budget in 2019 and was considering changes and additions in a supplemental budget this session. In theory, the 2019 budget funded State government—all three branches—for the two years of the biennium. Initially, before we recessed, there had been hope to complete the session early or to take a brief recess. But a pandemic doesn’t operate on a timetable.

The session began with a goal of passing a major package of bills aimed at the cost of living for local residents—providing state infrastructure to help spur housing development for working families, raising the minimum wage, making the earned income tax credit refundable and increasing the rental tax credit, and expanding child care opportunities. Some of those proposals seem unlikely with so many people losing jobs and many small businesses facing bleak prospects.

Nevertheless, as Winston Churchill said, and Rahm Emmanuel more recently observed, never let a good crisis go to waste. People have begun arguing that our current situation illustrates the problem with being too dependent on one industry and the need to diversify our local economy. I’m interested in hearing what areas people believe could thrive on Maui.

Past efforts have had mixed success and increasingly face controversy. Senator Daniel K. Inouye supported the vision of Maui business leaders in locating a super computer at Kīhei’s Research and Technology Park and in funding telescopes and other facilities atop Haleakala.

Central Maui still has a tremendous opportunity to incubate and grow health care jobs. In the corridor from the Maui Medical Group campus/ Mālama I Ke Ola Health Center to the Kaiser Clinics, Cameron Center and Maui Memorial Medical Center, quite a number of health and social services are housed and available. Maui Health System has been willing to hire and train nursing students from UH Maui College to reduce the number of travelling nurses needed at its hospitals. Training medical technicians locally is also under discussion. The John A. Burns School of Medicine, before the legislative recess, had been advocating training medical students at UH Maui College, with the plan to attract more physicians for our County.

But other areas—regardless of the current emergency and the impulse to diversify the local job market—may face regulatory and local concerns and objections.

So the challenges are real. But coming out of the pandemic, we do have an opportunity to fashion the kind of community we want that can better weather the next economic storm. 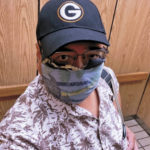 Gilbert S.C. Keith-Agaran represents Central Maui in the Hawai‘i State Senate and serves as Vice-Chair of the Ways and Means Committee (the budget, appropriations and tax panel of the upper house). He is wearing a face mask fashioned by his spouse Kallie Keith-Agaran from his old Aloha Shirts.