You know you grew up in the Philippines if your idea of celebrating Easter automatically involves church and other religious activities weeks before Easter Sunday itself.

Is this mentality exclusive to Catholic raised Filipinos?
Almie of P&#257;‘ia, who was born and raised in Amlan, Negros Oriental, recalls how she was focused mainly with church activities and spirituality during this season. For her, it was the climax of the entire Lenten celebration. Prayers, mass celebrations, fasting and abstinence were also part of the rituals.

Abstinence, abstinence? Does this mean no sex? Or does it simply refer to abstaining from anything that typically would bring us individual pleasures? Abstaining from eating meat for me would be next to impossible. For some it may be chocolate, or abstaining from shopping for the entire Lenten season. My mom, Lilia of P&#257;‘ia, chooses to abstain from meat and red wine for the entire season. No matter what you choose to abstain from during this Lent, remember that both Wednesday and Friday are still no-meat days.

Born and raised in Metro Manila, I am very familiar with the annual traditions that come along with the season of Lent. I knew Lent was starting again as soon as I get a black cross placed on my forehead on Ash Wednesday. The ashes used on Ash Wednesday are from the palms used from the previous year’s Palm Sunday. Palm Sunday is celebrated when Christians carry palms or palaspas in church, to recognize the Gospels’ reference to Jesus’ entrance to Jerusalem. He was greeted with a sea of palms over two thousand years ago. I knew this season was supposed to be something special and sacred. But as a child, I couldn’t help but dread this season knowing that I will be told once more “no meat,” no to so many things I like and I will have to spend a lot of time praying. Not to mention I was always told to behave nicely. Come to think of it, I was told to do that last part year-round. Hmmm!…

“Growing up in a Catholic family, we attend church every Sunday. This was not an option, more so, observing the Holy Week which is sacred,” said Marjorie from Paoay, Ilocos Norte. For Catholics, Holy Week is celebrated the week prior to Easter Sunday starting on Palm Sunday. Joan from K&#299;hei remembers witnessing a procession of men carrying the cross. She can still see the seriousness in their facial expressions while they expressed their devotion by whipping their backs until it bled. Others even got nailed on the cross. As a kid, that scared Joan as she did not like the sight of blood at all.

Joan’s recollection also stirred my own memories about the darkness of Lent. I too witnessed the practice of self flagellation in the streets of Makati. As a child seeing this rather barbaric act, it always left a feeling of darkness and dismay with me. I knew this was something that happened to our Christ Lord, however, I couldn’t understand why others had to go through the same thing after Jesus Christ already paid the price. No one could give me an answer at that time.
I received some clarification just recently from Father Jojo of P&#257;‘ia about this practice. According to Father Jojo, this practice was done before Holy Week and ends on Black Friday. There is a designated starting point and it will end in the place the participant will get crucified just as the Christ did.

“What is the purpose of all this?” I asked Father Jojo. A select group of men who makes a panata or covenant, can participate. Those who made a panata will do this practice year after year for the rest of their lives as an exchange for a divine favor: health of a family member, saving someone’s life or other miraculous things that they asked for and received.

I also just learned that not everyone can participate. Only men can do this practice. Then again ladies, why would we even consider this?

What exactly takes place during self-flagellation? The participants’ bare backs are red from giving themselves whippings; left and right. They continue this until they reach the cross. Many years back, these whips also had small hooks attached on the tips, ripping the bare skin as it hits it over and over again. These days, some no longer use the hooks. There are different ways to cause excruciating pain on one’s self. This is one that I witnessed year after year.

Now why do this in public? We were always told to do acts of kindness in secret as only the Almighty should know. Those who participated say that they want the public to bear witness to their everlasting devotion. And just for clarification, this act is in no way sanctioned or approved by the Catholic Church.

Lucy Peros recalls her 2007 pilgrimage to the Holy Land. “When I was growing up, I’ve heard of so many Bible stories from my grandparents, my mothers, my teachers at catechism classes, and of course today from the readings at church. The names of people, places, and events that were mentioned in those Bible stories were just pictures in the depth of my imagination until our pilgrimage to the Holy Land. Everything became alive!” Lucy’s trip took her to Israel and large regions of Jordan and Egypt. One of the highlights was climbing up to 7,000 feet of the 7,498-foot peak of Mount Sinai, where Moses received the Ten Commandments tablet from God. Lucy also traveled to the Jordan River, where she renewed her baptism vows, and rode a boat in the Sea of Galilee. Lucy’s pilgrimage brought her to almost all the religious sites—Mount of Beatitudes, Mt. Tabor, Cana, Nazareth, Galilee, Mount of Olives, Garden of Gethsemane, Basilica Church of the Nativity, Bethlehem, Mt. Zion, Via Dolorosa, Mount Calvary, Golgotha, Bethany, and the Dead Sea—including the chapel of the Flagellation, where Jesus was scourged.

Marjorie reminisces her Easter celebrations in Paoay, Ilocos Norte when she could join the procession of saints on floats around her hometown. She recalls holding a lighted candle and walking around. Joan of K&#299;hei similarly recalls memories of the adorned floats carrying the holy statues. This procession takes place at early dawn of Easter when a float carrying the statue of the risen Jesus is covered with a white garment while a separate float is carrying the mother Mary with a black veil over her face. The two statues take separate routes and each follows a route that would eventually lead them back to the church grounds and then the two statues meet face to face. Slowly a little girl dressed in an angel outfit is carefully lowered close to the statue of mother Mary. The little angel will then lift the black veil to reveal the joyful face of the blessed mother. This officially starts Easter and the crowd of thousands who flocked from 2–3 a.m. in the morning applaud.

When it’s finally Easter Sunday, the celebration begins! This is after all the day that officially puts an end to the long fasting—not to mention…abstinence—season of Lent! John Patrick of K&#299;hei recalls, Linggong Pagkabuhay, which translates to Resurrection Sunday. John Patrick remembers the preparation of various special dishes, sometimes with the most important king of the table as he refers to it, the letchon! No one would argue with John Patrick for sure, including me. Letchon is truly synonymous to the Filipino culture. Even though I no longer include pork in the daily dietary meats, I can vouch for the amazingly dreamy taste of fresh letchon. When prepared correctly and traditionally, there is no taste quite like it. John Patrick added that the special dishes typically prepared on Easter Sunday is brought to the nearest beach or water park in the Philippines. Joan from Cebu recalls Easter in Cebu as “hands down spending a long fun weekend with family and enjoying delicious food!”

Easter Sunday celebrations consisting of family gatherings and feasts are almost the equivalent of Christmas day festivities but held in the springtime. The Christmas season has barely concluded in December when you can already spot Valentine’s Day items on display along with Easter goodies.

How different is Easter in the Philippines compared to America? The difference is the commercialization of Easter in the United States.

If you are one of the many who have already assimilated to the American way of living, you know Easter to you somehow relates to bunnies, colorful eggs, and pastel colored chocolate goodies. American traditions also include hiding eggs and winning the prized Easter baskets!

Melanie from Makawao, whose family immigrated from the Philippines in the early 1990s, shared her favorite memory of their first Easter Season in Hawai‘i. Having just moved to the United States, her parents tried their best to assimilate their two elementary age girls to the local traditions. Their mom surprised them with an egg hunting game inside their house. It’s an activity her mom had learned from a Martha Stewart show on television. A month later, a foul stench lingered in their house. The smell was not familiar and their mom cleaned their house up and down but the smell lingered for another three weeks. Their mom concentrated her cleaning efforts in the kitchen and even moved their stove and refrigerator to see if a dead mouse was somehow stuck there. It wasn’t until much later that their dad found the last remaining two eggs from Easter. The eggs had rolled behind the stereo cabinet and rolled down in between the wall and the cabinet nook. Safe to say that was the first and last time their mom used boiled eggs for the egg hunting. And all activities moved outside the house. No more stinky after Easter!

For Marjorie, after she moved to Maui, Easter is celebrated with brunch and Easter egg hunting with her family. “But these days with everyone’s hectic schedule and being a business owner, we no longer have time to celebrate with the entire family,” she said. Almie’s activities with the Holy Rosary Church in P&#257;‘ia allow her and her family the convenience of not only being able to attend regular service but also to be involved with the church activities and other spiritual preparations leading up to Easter Sunday. “We have egg hunting in the church grounds and beach parties to follow,” she added. She feels very blessed to have other families with the same spirituality to celebrate with.

John Patrick is very thankful to have learned and practiced Easter in the Philippines. Now that he is here in the United States, he is even more thankful that he is able to follow the same practices with his own family members…even though he is in a different place, the practice and tradition are still very much in his heart.

There are many traditional ways to celebrate Easter. Whether you choose to center this day around religious rituals and practices or to look for the colorful eggs left by the Easter bunny, remember to celebrate the Easter season. 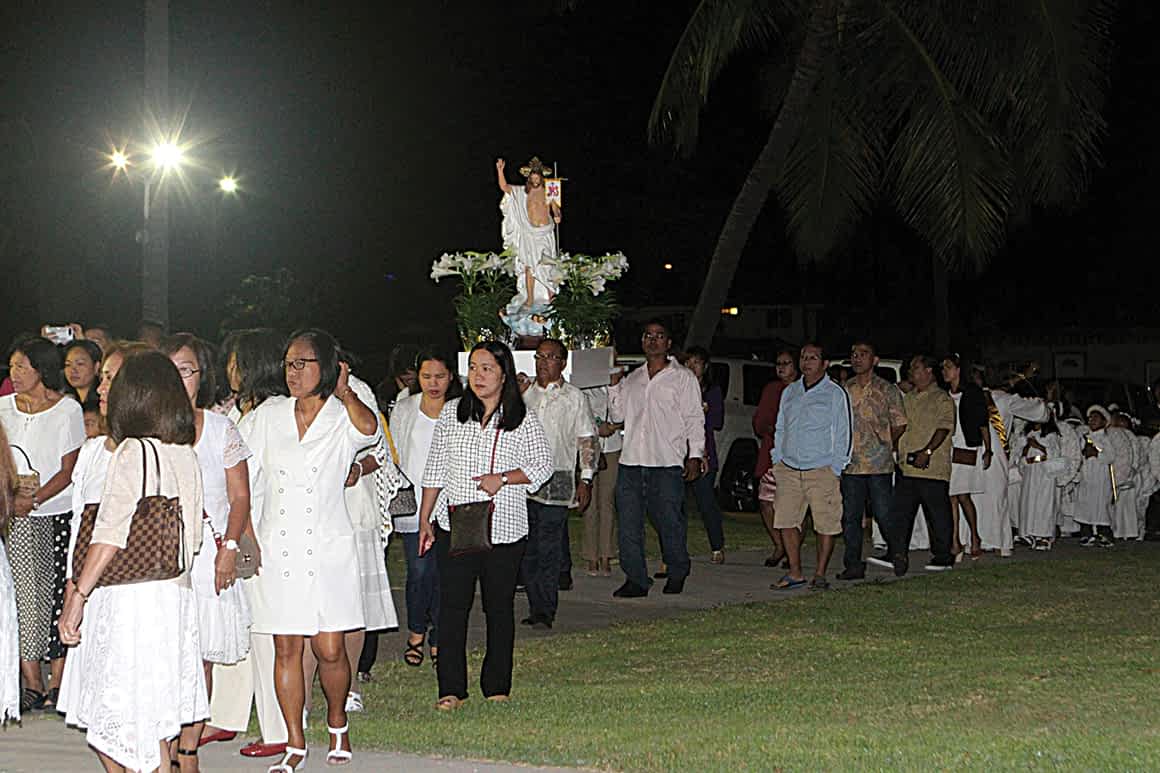 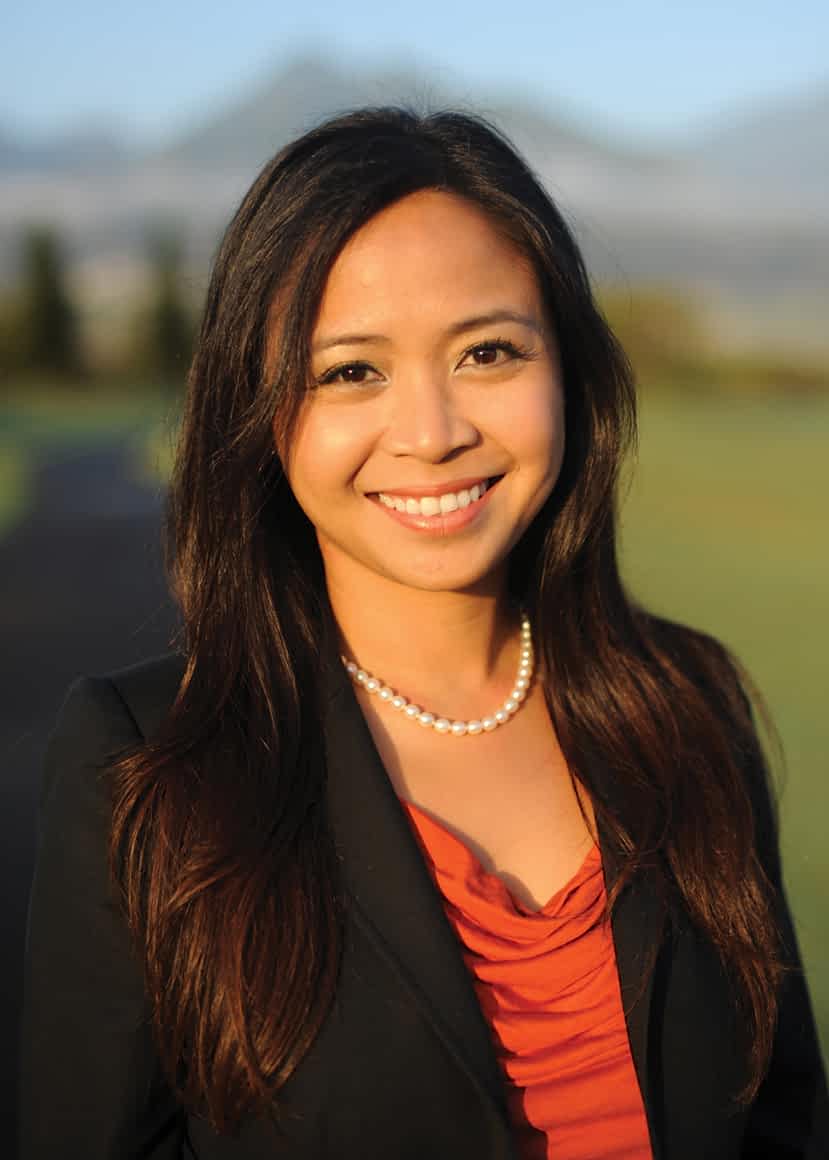 Sharon Zalsos is a past president of the Maui Filipino Chamber of Commerce (three terms) and has her own marketing business: Kalona International LLC. She’s also an ACN Independent Business Owner. A former Miss Maui Filipina, Sharon played the lead in MAPA’s presentation of Miss Saigon. A graduate of Maui High School, Sharon is employed with the County of Maui and a proud Veteran of the United States Air Force.
[/column]
[/row]