Home Featured Stories Give It Up For Lent!

Pinapaitan. Dinuguan. Fatty foods. Beer. That’s what sixty-four year old Elmer Tolentino is giving up for Lent. Besides, “it gives me gout,” said Tolentino, who worships at Maria Lanakila Roman Catholic Church in Lahaina. “But it’s hard to avoid the foods you love to eat and the beer you love to drink.” Seventeen year old Kimberly Taroma, who worships at Good Shepherd Episcopal Church in Wailuku, says “I’m giving up meat—all types: pork and beef. Every since I started judo, I cut out my meat so I could lose weight so I’m continuing that during Lent.” 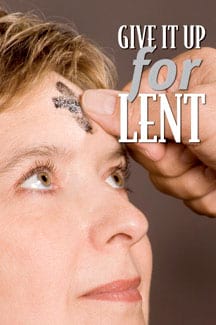 Food is a common thing to give up during Lent. “This season of Lent, I commit myself to control my intake of rice,” said sixty-nine year old Saturnina Balasan, who worships at Christ the King Roman Catholic Church in Kahului. “In a Filipino household, this is a staple food. As I do this, I have placed dollar value on each meal which means, I give it up, and donate its cash equivalent to help other people in need.” Sixteen year old Shandi Agpoon of Good Shepherd is joining Balasan “I’m giving up rice,” she says. “That’s the one thing I eat every day.”

Balasan’s fellow parishioner, Charlene Yamashiro, intends to “give up foods that I love to eat or drink like dark chocolates and soda.” Nineteen year old Sheena Garo, who worships at Good Shepherd is giving up soda. “My late grandma—83 years old who died a couple of months ago—influenced me because my family talked about how when she was young she drank so much soda. Soda is not good for you so it’s best to give it up.” Nineteen year old Rose Anne Rafael, also of Good Shepherd, says “I’m giving up coffee. I just want to feel more healthy by avoiding caffeine including sodas.” Fifteen year old Kathleen Taroma, also of Good Shepherd, says “I’m giving up soda because it’s unhealthy. I would normally drink two or three cans a day.” “I’m giving up the energy drink Monster,” says thirty-three year old Natasha Lau, also of Good Shepherd. “I normally drink at least two a day. I don’t need to drink Monster because it’s not healthy.” 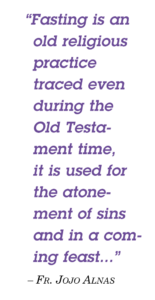 In previous years, the Taroma siblings gave up junk food, soda, candy and watching TV while Garo gave up meat, playing video games, and candy. Rafael gave up meat while Agpoon gave up chocolate and Lau gave up alcohol.

“Fasting is an old religious practice traced even during the Old Testament time, it is used for the atonement of sins and in preparation for a coming feast,” explains Fr. Jojo Alnas of Holy Rosary Roman Catholic Church. “Fasting is a sense of sacrifice geared towards self discipline and to attain a higher value, the virtue of self restraint and the virtue of charity. As an individual who practices fasting, one’s sacrifice is offered basically for the atonement of his or her sins and even the sins of others, that is why the act of fast has a penitential character of it. Hence, to fast is not a selfish act.”

When I was growing up, my mother Catalina taught me that I couldn’t eat meat on Fridays during Lent. As she did most of the cooking in the house, I had no choice but to follow and our choices were usually tilapia (fried or in a soup), sardines, or tuna. I really liked the tuna with long rice and onions. When Good Friday came around, I had to be very quiet, especially from noon until 3 p.m. and we still could not eat meat until Easter Sunday.

I learned through Christian Education, held on Wednesdays at Good Shepherd and taught by Margaret Cameron and Jay Van Zwalenburg, that Lent was symbolic of the forty days that Jesus was fasting in the desert and being tempted by the devil. In those days, Christian Education included a lot of movies that focused on the parables. We also had time for arts and crafts, running around playing “steal base,” and worship led by Fr. Justo Andres, the Associate Rector of Good Shepherd.

“Lent is one of the oldest observations on the Calendar of the Church,” said Fr. John A.H. Tomoso, associate priest at Good Shepherd. “Like all Christian holy days it has changed over the years but its purpose has always been the same: self-examination and penitence, demonstrated by self-denial (giving up favorite things in life), in preparation for Easter.”

I think over the years, I normally tried to avoid meat on Fridays but sometimes it just didn’t happen. A few years ago, I even gave up wine. It was not an easy task and I resorted to drinking more whiskeys and sugary drinks like mai tais and margaritas. Like Tolentino, beer is on seventy-two year old Yamashiro’s “give up for Lent” list.

According to Tomoso, “Early church father Irenaus of Lyons (c.130–c.200) wrote of such a season in the earliest days of the church but back then it lasted only two or three days, not the 40 observed today. In 325, the Council of Nicea discussed a 40-day Lenten season of fasting but it’s unclear whether its original intent was just for new Christians preparing for Baptism but it soon encompassed the whole Church.”

Lent is always a difficult time for me because my dad Elias died on April 4, 2000 (less than three weeks before Easter), my maternal grandmother Margarita died on April 9, 1997 (a week and a half after Easter), my uncle Pascual died on March 24, 2009 and my “second Mom” Raquel Nancy Andres died on March 28, 2009 (some three weeks before Easter that year). But as Fr. Greg Johnson, my former priest at St. Timothy’s Episcopal Church in ‘Aiea would preach “You have to go through Good Friday to get to Easter.”

As a kid, I loved Easter because of hunting for Easter eggs. To this date, I recall winning $20 for finding the special egg. When my kids, Christian and Danielle were young, we did the whole nine yards of commercialized Easter, even taking photos with the Easter bunny. I’m not sure my kids learned the rite of abstinence during Lent. My daughter Danielle was recently on Maui on a Friday and my task was to pick up dinner for her and four state Senators: Rosalyn Baker, Donavan Dela Cruz, Kalani English, and Gilbert Keith-Agaran. The Senators selected a plate that included fish from Da Kitchen. My daughter chose the kal bi plate—all rice.

But food isn’t the only thing you can give up for Lent. Seventy-nine year old Naty Agdinaoay intends to give up “watching TV, attending parties, buying too much clothes, gluttony, self control” and hopes to “curb the anger and restrain all resentment and impatience so as to overcome evil with good.” The Christ the King parishioner hopes to “attain God’s peace and rejoice in God’s love.”

Eighty year old Leo Asuncion, also of Christ the King, says “I’ll be sacrificing some of my leisure time to visit family and friends who are patients in Hale Makua. Just seeing their smiling faces makes me want to visit them more often. I am also abstaining from desserts during Lent although it’s quite a challenge…however, I’ll keep on trying.”

Yamashiro explains her Lenten abstinence of food and drink: “I’m giving these up to build a better relationship with God and have less attachment to earthly things. I also need to be more compassionate and empathetic to an elderly neighbor and be more understanding and not frustrated with her dementia. Every morning I ask the Lord to give me strength to accomplish all that I want to do.”

“Fasting is always intertwined with abstinence, alms giving and prayer,” explains Alnas. “When one practices fasting, abstinence and prayer such person must be more charitable to the ‘other’ in terms of words and actions in order that the performance of fasting, abstinence and prayer is categorized as for ‘show,’ for people to see and receive praise of it, hence, one can share generously his time, talent and treasure to other people especially the poor and the needy.”

And in this day and age of the internet, some have decided to forego social media. “For Lent, I am cutting down some time doing Facebooking,” said sixty-eight year old Lucy Peros of Christ the King. “Facebooking is very addictive. In turn I will use that time to do more praying, meditating, reading religious books, e.g. books about saints, religious articles/stories, etc.”

Alfredo G. Evangelista is giving up rice for Lent—except on Sundays which is a Feast Day.

Lucy Peros contributed to this article.