Mom avoids taking pictures with only two other people. She will pose with one or with three others or more. Three in a photo is never an option. She never explains why but we indulge her (except when we play candid camera and she doesn’t notice the iPhone).

Some things I write off simply as superstition. I assume some is just folk tales from the barrio.

Don’t sleep with your feet directly facing the door—I assume evil spirts could pull you right out of the room. Maybe it’s Ilocano feng shui.

After family funerals, you go to the beach and wash off in the nearshore surf. Then you let one of the elders play pattycakes and slap you on the forehead or skull with a vinegar concoction when you least expect it.

A lot of our received wisdom is stored away without knowing the reasons.

When I was young, both my grandmother and my mother warned don’t go to bed with wet hair (something I don’t need to worry about anymore). But as a result of the small kid time drilling, I avoid taking showers or baths late at night.

I appreciate some instruction reflects her life experience. Her teen years passed during World War II in Badoc-Pinili. She’s still somewhat of a hoarder (she still uses my baby highchair as additional shelving for baskets holding fresh vegetables from the backyard garden).

Food especially should never go to waste. Extra rice can be fed to feral chickens at the Maui High parking lot during morning walks. Leftovers can be shared with the neighbors for their dogs. Growing up in Pā‘ia, the slop man would come by weekly and pick up leftover food, peels and other waste for his pigs.

She, in passing, recalled to my sister how she once stole an egg as a child and traded the egg for candy. She still feels guilty about that as she cracks open her soft-boiled egg for breakfast.

Some traditions need no explanation.

When we visit the cemetery in Ha‘ikū, we take food and drinks for the loved ones laid to rest there. When we were kids, my sister or I would point out a relative never liked a particular dish or beverage. That usually earned a stern look. We just think it now and dutifully set out portions at each grave marker.

A new project can’t start on a Tuesday or Friday. Break ground on Wednesday instead. Or better yet on Thursday. Back in the day, that was the rule in the P.I.

She advises my sister, don’t clip your nails on Tuesday (but it’s probably okay if you have them done by a professional at the salon and you pay for your mother’s pedi- and manicure, too.)

It’s things we laugh about, and my sister posts on social media about.

Sometimes I hear my sister repeating some of the same advice to our nieces and their children.

We appear to be passing on our family lore after all. 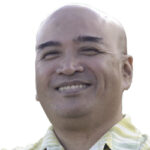 Gilbert S.C. Keith-Agaran practices law in Wailuku. He was told he was named by the doctor that delivered him when his parents had no name picked out for a boy. He has since learned “Gilbert” is a fairly common name in the extended family on both the Agaran and the Coloma side. Lore.