On February 5, 2018, Ambassador Joselito A. Jimeno arrived in Honolulu and became the 19th Consul General of the Philippine Consulate General, succeeding Gina A. Jamoralin who was assigned to Chicago.

Since December 1946, almost two dozen names have been bestowed the honor: starting with Modesto Farolan which later included Juan Dioniso and Trinidad Alconcel, who helped to shape and guide Hawai‘i’s Filipino community. Since the turn of the century in 2000, six more names have been added to the auspicious list: Minerva Jean Falcon, Rolando Gregorio, Ariel Y. Abadilla, Leoncio R. Cardenas, Jr., Julius D. Torres, and Gina A. Jamoralin.

Jimeno and his wife, Araceli, are slated to attend a Welcome Reception on Maui on April 19 at the Velma McWayne Community Center in Wailuku, pending any last-minute meetings on the mainland or with visiting officials from the Philippines.

Jimeno was born in Quezon City while his father hails from Ilocos and his mother is from Tarlac. Jimeno’s wife and her family are from Baguio City. Jimeno received his degrees from the University of the Philippines: a Bachelor of Science in Mathematics (1977) and a Master in Business Administration (1983).

After a brief stint in the private sector (in the Executive Development Program of FNCB Finance/City Trust Bank and as a Senior Staff Assistant with SGV & Company), Jimeno joined the Philippine Foreign Service.

“I joined the Philippine Foreign Service in 1987 when the country was slowly transitioning from decades-old martial law rule to a democratic form of government,” explained Jimeno. “During this period, the Philippine Government, through the Department of Foreign Affairs (DFA), once again pursued development diplomacy, in the active pursuit of opportunities abroad in the vital areas of trade, investment, technology, finance and aid—areas of my expertise and training. I thought that I could then give the DFA a try, so I left my job at the private sector, and have been in this profession for more than thirty years now.”

Jimeno spoke of the challenges of each post: “Each of the foreign service post I’ve been to is unique, and has its own challenges and rewards. To be effective in our work, wherever we may be, we are guided by the three pillars of Philippine foreign policy, to wit:

1. Preservation and enhancement of national security;
2. Promotion and attainment of economic security and
3. Protection of the rights, and the promotion of the welfare and interests of overseas Filipinos.

“While these pillars overlap and cannot be considered apart from each other, one may take priority, or be highlighted over the others, depending on many factors—political environment, socio-economic situation, geographic location, local and religious beliefs and other circumstances.”

Immediately prior to his appointment to Honolulu, Jimeno served as Ambassador to Switzerland and Liechtenstein from September 2015 to February 2018. Jimeno, who holds the rank of Chief of Mission Class I, is an Ambassador Extraordinary and Plenipotentiary, which means he has the highest diplomatic rank and full authority to represent the government.

“I was serving as the Philippine Ambassador to the Embassy in Berne, Switzerland, when I was informed by the Department of Foreign Affairs of an opening at the Philippine Consulate General in Hawai‘i, since my predecessor, Consul General Gina A. Jamoralin was being transferred to a post in the U.S. mainland. I then expressed my interest to transfer to Honolulu and head the Philippine Consulate. I am thankful that the Department favorably considered my request for a transfer,” said Jimeno, when describing the process of his appointment to Honolulu.

The Philippine Consulate General in Honolulu is the official representative of the Republic of the Philippines and provides the following services: issuance of passports, travel documents and visa; conduct of consular outreach programs; consularization (authentication/acknowledgment) of documents, such as Special Powers of Attorney, Deeds, school and medical records, trademarks, oaths and appointments; civil registration of births, marriages and deaths of Filipino nationals; procession of applications for dual citizenship; and assistance with the transport of pets to the Philippines, applying for National Bureau of Investigation clearances, renewal of Philippine driver’s license, medical missions to the Philippines, and securing of J-1 waivers (the two year home residence requirement).

“Since assuming my post as Consul General of the Philippines in Hawai‘i in February, I have experienced the extraordinary welcome from Filipinos who live here. I must say that the different countries where I’ve been assigned are beautiful in their own way, and a lot of good can be found in each culture. But I feel the tremendous warmth and friendliness of the people of Hawai‘i a distinct and endearing quality. By what I’ve seen, Fil-Ams in Hawai‘i proudly practice a unique fusion of the Aloha spirit and Bayanihan spirit,” said Jimeno when asked his impressions of Hawai‘i’s Filipino community. “Filipinos and Filipino Americans make up the largest ethnic group in the state, or a quarter of its population. Because of this, I have noticed that they are very much involved and they love to join groups, whether regional, religious, business or civic affiliations. I have also noted our Filipino diaspora in Hawai‘i maintains a tight connection to the home country. Despite years of being separated, strong ties endure. Many work hard and yearn to give back to their communities. Filipino community leaders are some of the most active and could be counted on to support and organize activities that help to promote the understanding and appreciation of Filipino values, culture and traditions.”

With 352,100 Filipinos and part-Filipinos comprising 25 percent of Hawai‘i’s population, (32 percent of Hawai‘i’s Filipinos, or 112,672 are foreign-born), there is a high demand on the Philippine Consulate General. On May 1, 2018, the Philippine Consulate General will implement an appointment system for its consular services of passport, dual citizenship, notarials, and civil registry. Appointments are made through the Philippine Consulate General’s website, www.philippineshonolulu.org. Senior citizens (60+ years), persons with disability, pregnant women, children seven years and younger, and overseas Filipino workers including seamen, are exempt from the appointment system and will be served on a “first-come, first-served” basis. (The next Philippine Consulate Mobile Outreach on Maui will be held on April 28–29. For appointments, please contact Maui County Immigrant Services Division at 270-7791 for more information).
Since Jimeno’s arrival in February, he has already hit the ground running. He has visited the Filipino fishermen at Pier 17, who are confined to the boats because they have no documentation to enter the United States. According to the AP, they are paid as little as 70 cents per hour and work 20-hour shifts when the fish are biting. Jimeno is working to obtain the appropriate visas for them. In that regard, Jimeno has met with Jade Butay, the Director of the State of Hawai‘i Department of Transportation, as well as U.S. Senator Brian Schatz and U.S. Congresswoman Colleen Hanabusa. Jimeno has also met with Governor David Ige, Hawai‘i State Senate President Emeritus Donna Mercado Kim, Admiral Harry B. Harris, Jr., Commander of the U.S. Pacific Command, and fellow Consul Generals Koichi Ito (Japan) and Kang Young-Hoon (Korea). Jimeno has also hosted the 76th commemoration of the Araw ng Kagitingan (Day of Valor) to pay tribute to Filipino-American veterans of World War II and participated in the 24th Honolulu Festival. Jimeno has also hosted the official launch of the 12th Ambassadors’ Tour to the Philippines, scheduled from July 7 through 15th, with stops in Manila-Cebu-Bohol. (Maui residents may contact Teresita Noble at 244-4609 for more information.)

Jimeno has already developed a four-point action plan for his tenure in Hawai‘i: “My priorities are as follows:
1. To oversee the restoration and renovation of the century-old Philippine Consulate General building and the construction of a new chancery building alongside it. As you know, it was through the blood, sweat and tears of the Sakadas, the first Filipino migrants to Hawai‘i, that we were able to buy this building on Pali Highway. Mindful of their monumental sacrifice, we will ensure to preserve the building’s original structures and façade. Simultaneously, a new Chancery (or office building) to house consular services, will be built to better serve the public. We hired a Filipino consultant to undertake this important project;

2. To introduce and implement major changes in our consular services. These changes include the launching of an appointment system for all our consular services such as passport, authentication and acknowledgement of legal documents; filing of civil registry documents; and application for reacquisition/retention of Filipino citizenship (RA 9225). These changes are in line with the objective of the Philippine Department of Foreign Affairs to provide a more convenient and accessible consular services to the public; and

3. To provide timely assistance to our Filipino nationals, not only those who are in distress, but also to those who are in need of intervention by their officials. For example, in March, I met with Filipino fishermen working in foreign-owned shipping vessels docked at Honolulu harbor. The men claimed to be generally satisfied of having jobs and earning a living to support their families back home. However, they too have concerns, and requested better facilities to alleviate their work and living conditions. I immediately brought up the issues of these Filipinos in my meetings with U.S. Senator Brian Schatz, Rep. Colleen Hanabusa and the Director of the Hawai‘i Department of Transportation; and

4. To actively engage the Filipino community on various projects. Filipinos make up the largest ethnic group in Hawai‘i and have made significant contributions up to the present time. I certainly acknowledge the crucial role they play in strengthening relations between Hawai‘i and the Philippines; and thus, we will continue to seek their commitment and support.” 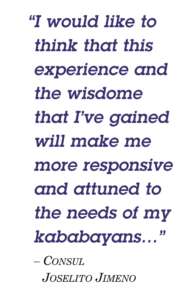 Jimeno’s four-point action plan is ambitious but one that can easily be met by someone with his credentials, experience, and leadership: “I’ve had more than thirty years of experience as a Filipino diplomat, ten of which as a Head of Post (Ambassador in Muscat, Oman; and in Berne Switzerland; and Consul General in Guangzhou, China and in Honolulu, Hawai‘i). I have met with different people from all walks of life, and witnessed, and have been a part of history unfolding in the different postings that I have been to. I would like to think that this experience and the wisdom that I’ve gained will make me more responsive and attuned to the needs of my kababayans, and a better, more effective representative of my country.”

Attending social events is an important role of the Philippine Consulate General. Jimeno smiled when relaying Consul General Gina Jamoralin’s advice to him: “Before I came to Hawai‘i, she advised me that I will have a very busy, active social calendar!”

The Fil-Am Voice joins the rest of the Maui Filipino community in welcoming Ambassador Joselito Jimeno and Madame Araceli Jimeno and hope that during your brief stay, you will feel the appreciation of all of Maui and understand why Maui nō ka ‘oi! Aloha and Mabuhay!

Alfredo G. Evangelista is a graduate of Maui High School, the University of Southern California, and the University of California at Los Angeles School of Law. He has practiced law for almost 35 years and is now a sole practitioner at Law Offices of Alfredo Evangelista, A Limited Liability Law Company, concentrating in estate planning, business start-up and consultation, non-profit corporations, and litigation. 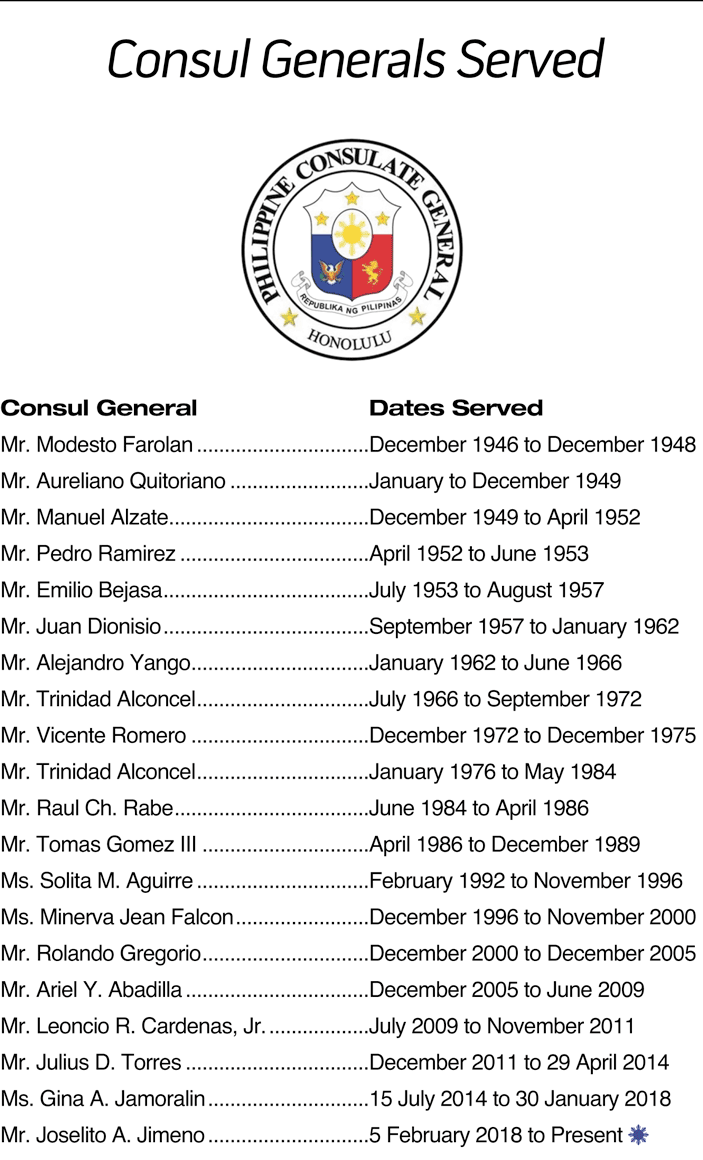 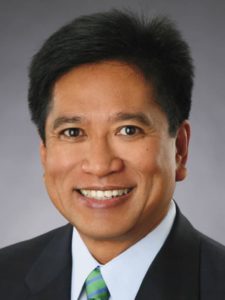 Evangelista first visited the Philippine Consulate General in Honolulu in August 1976 when Amb. Trinidad Alconcel hosted a Despedida party for the Good Shepherd Episcopal Church Filipino Folk Dance Troupe on their way to Canada and the West Coast where they performed Filipino folk dances.