Well, the people have spoken

Well, the people have spoken.

With the landslide loss, Aiona passes Frank Fasi and Dominis Garrida (“D.G. Andy”) Anderson as the biggest loser of Hawai‘i gubernatorial elections (Fasi lost as standard bearer of the Best Party in 1994 to Ben Cayetano and as Independent party nominee in 1982 to George Ariyoshi, although Fasi also lost primaries for the Democratic nomination in 1974 and 1978 to Ariyoshi; Anderson lost to Ariyoshi in 1982 and then John Waihe‘e in 1986, before losing a 2002 bid as a Democrat to then-Lt. Gov. Mazie Hirono; former U.S. Rep. and Lt. Gov. Tom Gill lost the Democratic nomination to John Burns in the 1970 “Catch a Wave” election and to then Lt. Gov. Ariyoshi in 1974).

With the U.S. Congress narrowly flipping to Republican control at press time, Case and Tokuda will be in the minority in what could be a very divisive final two-years of Joe Biden’s first term as President. The Democrats have held on to their majority in the U.S. Senate, meaning Schatz will retain his chairmanship of the Appropriations subcommittee on Transportation, Housing and Urban Development. Tokuda and Case will need to reach across the partisan aisle to have Hawai‘i’s self-sufficiency interests heard as the Agricultural Bill faces reauthorization.

As a member of the powerful Senate Appropriations Committee, Schatz will need to show if the old adage from the Daniel Inouye-Ted Stevens era still applies—in Congress, there are Democrats, Republicans and then, there are appropriators. Inouye and Stevens worked closely over the years for their two small states (admitted to the union together in 1959) when the two used their committee seniority in taking turns funneling federal funds for both Hawai‘i and Alaskan projects. Under the readopted Congressional Addition process (earmarking), Schatz will be in a position to assist local projects with federal resources.

The dean of the Maui delegation Kyle Yamashita (D-District 12- Upcountry) set a personal record for votes, as he easily beat back Republican Dan Johnson and Green nominee Summer Starr, 7,069–2,115–1,109. Yamashita is expected to play an even bigger role in the next legislature (the Maui Representative has been the top negotiator for the House Finance committee on public works projects since 2009). 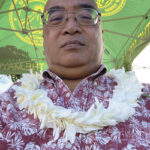 Gilbert S.C. Keith-Agaran was re-elected in the August 2022 Primary Election to a four-year term as the State Senator for Central Maui.