What does Memorial Day mean to you? It comes and goes year after year. When you ask most kids these days, it means no school for the keiki or a holiday for the working class. On the front lawn of the Kalana O Maui, 200 South High Street in Wailuku also known as the County Building, you can count on seeing tents set up with dozens of volunteers getting lei ready for the Memorial Day ceremony usually held at the Makawao Veterans Cemetery. Each year, a small U.S. flag is placed on each tomb stone that spreads across the lawn of the Veterans Cemetery. Sometime during the official ceremony, a visit from a helicopter takes place as it drops thousands upon thousands of rose petals and other local blooms above the cemetery. I’ve witnessed this several times already. I try my best to have my son accompany me each time. From a young age, he was taught the value of each of our servicemen and women. He is well aware of the sacrifices others have made in order for the rest of us to live in this blessed country of America.

One of my personal mentors has a standing commitment each Saturday morning that spans from 9 a.m. to 2 p.m. This is a training session for his business and he doesn’t miss. He happens to be an Air Force veteran and I invited him to accompany me to a memorial service in 2017. I knew full well that his answer would most likely be no thank you but I was curious. He smiled and he told me that he has never missed an opportunity to visit the Makawao Veteran cemetery to pay tribute to our fallen each year. I scratched my head and asked how that was possible since the formal ceremony starts at 10 a.m., the same time as his training. He replied that he doesn’t have to be a part of any formal ceremony to honor our fallen. He said he visits first thing in the morning and honors them in his own way. No crowd, no bands, no glitz. That made me think, we can each have our own way of paying tribute. What a concept. So I asked again, what does Memorial Day mean to you, personally?

Memorial Day by definition is a federal holiday in the United States. It is the day to remember the people who died while servicing in the U.S. armed forces. This holiday is observed every year on the last Monday of May. This year this falls on May 28, 2018. For all you students, this usually marks the beginning of summer vacation season.

Many confuse Memorial Day with Veterans Day. Just remember, Memorial Day is a day of remembering the men and women who died in the line of duty or while in active duty service. Veterans Day celebrates the service of all U.S. military veterans.

Do you recall Operation Iraqi Freedom which followed 9/11? We have a fallen soldier by the name Sergeant First Class (SFC) Kelly Bolor who died on November 15, 2003. He was 37 years old at the time. He was serving with the 137th Quartermaster Company, U.S. Army Reserve, based in South El Monte, California. He died when two 101st Airborne Division (Air Assault) UH-60 Black Hawk helicopters went down in Mosul, Iraq. “He said after everything was done, he wanted to come home and relax,” recalled his brother, Conrad Bolor. The late Bolor was born in Wailuku and raised in Lahaina. He was the third-oldest of five boys and a girl raised in a Filipino family. He was raised by his mother, Annie, after she was widowed in 1968. Bolor was a member of the Lahainaluna wrestling team and enlisted in the U.S. Army soon after graduation from high school. He is survived by his wife Kelly and son Kyle. Bolor was laid to rest at Maui Memorial Park in Wailuku.

There are countless casualties of war in the Filipino community from different wars. To include military fatal casualties of the Vietnam War: Catalino B. Antonio, Jr., he was an Air Force Sgt. from Maui. He died on August 18, 1972. His remains were recovered. Albert Babanayan, he was a Corporal in the Marine Corps. He died on March 5, 1966. His remains were also recovered. Magno Campos, who was a Staff Sergeant in the Army. He died on November 8, 1965, his remains were recovered. The list goes on and on with names of those who paid the ultimate sacrifice. For every remains recovered, there are many more unaccounted for and they remain missing in action or MIA.

At the upcoming Barrio Fiesta during Memorial Day weekend, the 9th Annual Veterans Memorial Service will be held at 12 noon on Saturday, May 26. The solemn ceremony includes the POW/MIA ceremony, which remembers the thousands of Americans who are still prisoners of war or missing in action. It is a poignant ceremony that was established nine years ago by the late Rogelio Evangelista, a U.S. Air Force veteran, who was very active in Maui’s veteran community. I will be participating again and I encourage all to attend to pay homage to our veterans who often are forgotten.

One such group of forgotten Veterans are the Filipinos who fought side by side Americans during World War II. Over 260,000 Filipinos fought in World War II on behalf of the United States and many of them paid the ultimate sacrifice.

Despite their service, these Filipino Veterans, who were U.S. Nationals, were disqualified from receiving the same rights, benefits, and privileges as others who served under the U.S. Armed Forces (Rescissions Act of 1946). What is the Rescissions Act of 1946 exactly? This United States law retroactively canceled the benefits that would have been payable to Filipino troops on account of their military services under the auspice of the United States during the time that the Philippines was a U.S. territory and Filipinos were U.S. nationals. The rationale provided by the U.S. Congress in 1946 was that the United States gave the Philippines two hundred million dollars ($200,000,000) after the war.

In 2009, the American Recovery and Reinvest Act provided for a one-time $15,000 lump sum for the surviving veterans who are U.S. Citizens, and a $9,000 lump sum settlement for non-citizens. Eligible people had one year from the time of passage of the bill to file claims. $198,000 was set aside for these payments

Recently, congress decided to award the Congressional Gold Medal of Honor to these Filipino veterans. The bill was introduced by Hawai‘i’s own Senator Mazie K. Hirono, and Representative Tulsi Gabbard. The bill passed both Senate and House in 2016 and signed by then President Barack Obama into law in December 2016.

At the ceremony held on October 25, 2017, the Emancipation Hall fell silent as a 100-year-old Filipino veteran, Celestine Almeda spoke, “Many have passed away waiting for 75 years for this time to come.” (Recently, the Filipino community on O‘ahu held ceremonies awarding the Gold medal to Filipino veterans, who need to purchase their own replica of the Gold medal but fundraising led by Maj. Gen. (Retired) Antonio Taguba are underway to ensure that each Filipino veteran will receive at no expense, their Gold medal.) 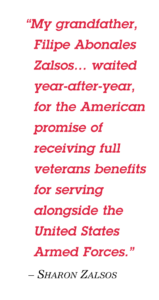 As I write this article, I am overwhelmed with a surge of mixed emotions as Mr. Almeda uttered the same words that has been burning in my heart each passing year we celebrate Memorial Day. My grandfather, Filipe Abonales Zalsos, fought in World War II in the jungles of Mindanao. Ever so patiently Lolo Filipe waited year-after-year, for the American promise of receiving full veterans benefits for serving in the United States Armed Forces. Instead, because of the Rescission Act of 1946, my Lolo (grandfather) along with most Filipino World War II veterans, did not receive these benefits and have been under recognized for their contribution during the war. My Lolo could not avail himself of the benefits afforded by the 2009 law as he died from kidney failure in June of 1993. Even if the benefits were extended to the surviving family, it would have made it next to impossible to claim as it was limited to only one year to file a claim. My Lolo was from Southern Philippines and I wonder to what length did the U.S. government go through to notify those who qualified for such benefits.

“Our broken promise to Filipino WWII veterans and their families is a stain on our nation’s history,” said Sen. Brian Schatz in his recent press release dated Thursday, Feb. 15, 2018. “And while we’ve tried to right that wrong, there are still far too many who have not received the basic veterans’ benefits they earned. Time is running out, and for some, it is already too late. We must act quickly to pass this legislation and fully honor the men and women who fought with us and served so bravely when we needed them.”

When Celestine Almeda got up from his wheelchair to make his way to the stage, the whole room was silent. He rested his cane against a table next to the podium and reached inside his coat pocket for his prepared speech. At the end of his speech, he quoted the U.S. Army Soldier’s Creed, “I am an American soldier,” he said. “I am a warrior and a member of a team. I believe I served the people of the United States.”

Let us always remember all those who answered the call of duty, served and fought to protect and defend the United States and its territories. Let us always honor the sacrifice made by those who paid the ultimate price for the blanket of freedom we all enjoy day after day. It is incumbent upon each of us to teach the next generation of these precious sacrifices and the importance of what these brave men and women sacrificed and continue to sacrifice.