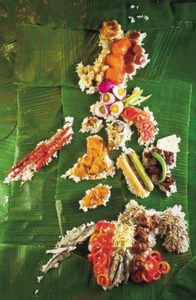 In the Philippine National Language—Tagalog

With over 7,100 islands, the style of cooking and the food associated with Filipino Cuisine have evolved over many centuries from their origins: Malaysian, Indonesian, Indian, Chinese, Spanish, and American influences, in line with the major waves of influence that enriched the cultures of the Pearl of the Orient Seas, known as the Philippine Islands, and as well as others that adapted to the indigenous ingredients and the local palate.


Daing (Dinaing) – marinated with garlic, vinegar, and black peppers. Sometimes dried and usually fried before eating.
Guinataan – cooked with coconut milk.
Guisa (Ginisa) – sautéed with garlic, onions or tomatoes.
Halabos (Hinalabos) – mostly for shellfish. Steamed in their own juices and sometimes carbonated soda.
Hilaw or Sariwa – unripe fruits or vegetables, raw. Also used for uncooked food in general as in lumpiang sariwa, known as Fresh Summer Roll.
Hinurno – baked in an oven or roasted.
Ihaw (Inihaw) – grilled over coals.
Kinilaw or Kilawin – fish or seafood marinated in vinegar or calamansi juice along with garlic, onions, ginger, tomato, peppers. A Filipino version of Ceviche, or even Poke.
Lechon – roasted on a spit, particularly a whole hog, or a type of poultry.
Lumpia – savory food wrapped with an edible rice paper.
Luto sa Kawayan – literally “cooked in a bamboo” as the cooking vessel over a hot charcoal.
Minatamis – sweetened.
Nilaga – boiled, simmered, or braised in a rich and hearty broth.
Nilasing – cooked with an alcoholic beverage like wine or beer.
Pinakbet – to cook with vegetables usually with long beans, calabaza, eggplant, bitter melon, and okra, traditionally with bagoong or patis or fragrant fish sauce.
Paksiw (Pinaksiw) – cooked in vinegar.
Palaman – filled or stuffed, like Manapua a.k.a. Siopao, though “palaman” also refers to the Spread used in a sandwich.
Pinakuluan – boiled.
Prito (Pinirito) – fried or deep fried. From the Spanish frito.
Relleno (Relyeno) – stuffed, as in a Rollade or a Galantine.
Sarza (Sarciado) – cooked with a thick sauce.
Sinangag – garlic fried rice.
Sigang (Sinigang) – boiled in a sour broth usually with a tamarind base. Other common acidic fruits include young green guava, raw green mangoes, and calamansi or sometimes, pias.
Tapa (Tinapa) – dried and smoked. Tapa refers to meat treated in this manner, mostly marinated and then dried and fried afterwards. Tinapa meanwhile is almost exclusively associated with smoked fish.
Tosta (Tostado) – toasted.
Torta (Tinorta) – to cook with eggs in the manner of an omelette.
Turon (Turrones) – wrapped with an edible wrapper; dessert counterpart of lumpia.