My mother, Alejandra Quia Cabudoy Cabalo is an amazing woman. She was born on August 7, 1920 in Cagayungan, Narvacan, Ilocos Sur, Philippines which makes her 100 years old. She was the third of six children of the late Bonifacio Cabudoy who came to Hawai‘i to work in the 1930s at Maui Land and Pine and the late Narcisa Cabanting Quia Cabudoy. Even though she only received up to a 4th grade education, she is a very smart and wise woman.
In her younger days, Mom was a very talented seamstress. She could sew anything making her own patterns.

After the war, in 1946, recruiters from the Hawai‘i plantations went to the Philippines to recruit men to come and work in the pineapple and sugarcane plantations. They were the Sakadas. My father, Elpidio Cabalo was one of them.

He left my Mom (26 years old) with my brothers ages five and one. Mom was left as a single parent raising two boys by herself. In 1949, Dad came back to the Philippines to visit and it was that time that I was conceived. I was born on March 11, 1950. I was born without my father because he had to come back to Hawai‘i to work.

My Mom is a religious woman and has been since she lived in the Philippines. She would take me along with her to attend mass at our town church, St. Lucy Church in Narvacan, Ilocos Sur every Sunday. During rainy season, the roads would be very muddy because they were not yet paved. Mom and I would carry our shoes, walk barefooted and then wash our muddy feet just before we entered the church and put our shoes or slippers on. She recites the rosary every day as long as I could remember including today. Her alarm clock is programmed to KPMW radio station and at 4 a.m. every day, the rosary would go on and she follows it.

My Mom is such a good cook. She does not believe in measuring cups or measuring spoons. She cooks by eyeballing and tasting. I learned how to cook some of the traditional Filipino food from her just by watching and helping her in the kitchen. I learned from her how to cook whatever is available from our garden. Even though I follow how she cooks, her cooking always tastes better than mine.

In 1960, my brother Ben came to join my Dad and in 1962, Mom, my brother Dominick and myself joined him also. Upon arriving on Maui, Mom joined the workforce, working at the Maui Pineapple Company. She worked under the merciless sun picking pineapple, broke pineapple slips for planting, sprayed poison to kill the weeds and cutting grass. She worked in the field until she retired at age 62 in 1982. When she and my Dad retired, they enjoyed going on trips all over Canada, the continental United States and the Philippines. They enjoyed Las Vegas very much, winning some money.

During Rizal Day, Christmas and New Year’s celebrations, Mom and the rest of the women in Hāli‘imaile Village wore their Filipino attires (kimonas and pandilings). They enjoyed dancing, singing and even role played Filipino stories and Nativity Scenes at Christmas time.

In December 2009, Mom and Dad were awarded the first Outstanding Ama At Ina (Father and Mother of the Year) at the first Rice Festival of Binhi at Ani. Our family is humbled and yet proud for our parents’ accomplishment.

Mom and Dad were very active at the St. Joseph Parish (Makawao) Feast, Filipino Catholic Clubs, Hāli‘imaile Filipino Community Association and the Pukalani Senior Lunch Program. They both instilled in us their children the importance of education. As a result, all of us three children and their five grandchildren, all graduated with college degrees. We thank them for their sacrifices.

Mom became the primary caretaker of my Dad who unfortunately was sick for 26 years until he died at age 89. Since Dad’s passing, Mom who is a very strong-willed and independent woman, chose to live by herself in her own house in Hāli‘imaile until her 100th birthday. All this time, she was able to take care of herself, cook for herself, etc. However, age caught up with her. She got sick soon after her 100th birthday and after she was released from the hospital, she was no longer able to take care of herself but now lives with me in Kahului. She now lives under the care of Hospice Maui, with my help, my children’s help, and my church community’s help.

I especially admire Mom for her loyalty and faithfulness to my Dad when they were living apart for many, many years before coming to Hawai‘i. Her strong faith in God kept her strong all those years they were apart. My Dad was just the same. He was also very loyal and faithful to my Mom. They would have celebrated their 70th wedding anniversary on May 14, 2011 if my Dad only lived for just two short months more. He died on March 20, 2011. 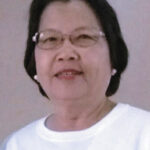 Lucy Peros is a retired schoolteacher, having taught at St. Anthony Grade School and Waihe‘e Elementary School. Both of her parents, Elpidio Cachero Cabalo (a 1946 Sakada) and Alejandra Cabudoy Cabalo of Hāli‘imaile, worked for Maui Land and Pine Company. Lucy now enjoys retirement. Lucy will be on leave from The Fil-Am Voice while she acts as the full-time caretaker for her Mom.

[Editor’s note: Happy Birthday Nana Alejandra. If you know of a centenarian, please contact us and we will gladly feature him/her in an upcoming issue.]