On February 22, Russia’s president Vladimir Putin began invading Ukraine. In his first remarks after what he described as an “unprovoked and unjustified attack” on Ukraine, President Joe Biden imposed heavy sanctions against Russia and painted Putin as the aggressor.

“The world is shocked and appalled by the atrocities committed by Russia’s forces in Bucha and across Ukraine,” said Congressman Kaiali‘i Kahele. “The Ukrainian people continue to bravely defend their country and their freedom. The United States, along with our Allies and partners, stand steadfast in support of Ukraine’s sovereignty and territorial integrity—however, President Putin’s war has impacted us here at home.”

Kahele also observed the need to focus on the United States’ role in the Indo-Pacific region. “For Hawai‘i and our region in the Indo-Pacific, the coordinated, effective international response to Russia’s assault on Ukraine has shown us how important our international partners and allies are for our own national security objectives. As the world focuses on Ukraine, we must continue to prioritize U.S. efforts to expand and promote our alliances and networks of partnerships in the INDOPACOM region.”

The Russian Revolution began in 1917. In 1922, led by Vladimir Lenin, the Union of Soviet Socialist Republics (“U.S.S.R.”) was formed with fifteen republics. After Lenin, Joseph Stalin came to power through World War II until he died in 1953. Nikita Khrushchev and later Leonid Brezhnev led the U.S.S.R. until Mikhail Gorbachev ascended into power in 1985.

Gorbachev inherited a failing U.S.S.R. economy. He believed the U.S.S.R.’s success depended on improving relationships (and stopping the arms race) with the United States and the rest of the world. On June 12, 1987, then President Ronald Reagan made his famous speech at the Berlin Wall saying “Mr. Gorbachev, tear down this wall.”

The revolution against communism and the U.S.S.R. began in Poland in 1989 and by 1991, Gorbachev was no longer the U.S.S.R. leader. The U.S.S.R. was dissolved, with Ukraine, Belarus and other Soviet republics declaring their independence from the U.S.S.R.

Other than Star Trek star Leonard Nimoy’s and That ’70s Show actress Mila Kunis’ ancestral roots to Ukraine, what makes Ukraine so important? Ukraine is the second largest country in Europe (second to Russia which is twenty-eight times the size of Ukraine). Ukraine is rich in oil and gas. (Russia has the most gas reserves in the world and supplies about one-third of Europe’s natural gas.) Ukraine has about 395 million barrels in oil reserves and 349 billion cubic metres of gas reserves. (Russia has about five percent of the world’s total oil reserves.) Ukraine and Russia are major wheat and grain exporters.

Even though Ukraine is some 7,456.1 miles (or 11,999 kilometers for those of you who ascribe to the metric system) away from Hawai‘i, what happens in Ukraine affects Hawai‘i.

“The war in Ukraine is affecting the supply chain in Hawai‘i more than any other U.S. state,” says Chamber of Commerce of Hawai‘i President and Chief Executive Officer Sherry Menor-McNamara. “With our isolated location in the Pacific, Hawai‘i is the most petroleum dependent state in the country. According to the American Fuel and Petrochemical Manufacturers trade association, Russia represents only 3 percent of total U.S. crude imports. However, Hawai‘i imports several million barrels of Russian crude oil annually, accounting for 10 percent to 25 percent of Russian crude shipments to the U.S., depending on the year. It is not just oil; the entire global supply chain is being affected by the war in Ukraine. Food and other goods are seeing delayed shipments and increased prices in Hawai‘i. It is causing ripple effects throughout our economy, which is still trying to recover to pre-pandemic levels. With no end in sight to the war in Ukraine, we will continue to see these sharp price increases continue.”

Yes, gas prices have increased. It was no April Fool’s joke that on April 1, the lowest regular priced gasoline in Central Maui was $4.699 per gallon at Costco, followed by $4.789 at Maui Oil, $5.299 at Texaco and Shell, and $5.329 at Hele On. AAA tracks gasoline prices throughout the state [see Box for a sampling of average gas prices in Kahului] and since the Russia/Ukraine war, it has jumped an average of seventy cents per gallon in Kahului.

The increase is not surprising due to the sanctions against Russia, as explained by Kahele. “As a result of Russia’s invasion of Ukraine, the United States government banned the importation of Russian oil, liquified natural gas and coal to the United States in order to deprive President Putin of the economic resources that he continues to use to further his agenda. On Maui, the U.S. import ban has put an enormous strain on everyone by driving up gas prices at the pump to record levels.”

The increase in gas prices has affected Victor Campos who owns Campos Towing. “I used to fill up my truck for $100.00; now it’s $150.00,” says Campos, whose truck’s fuel tank holds about thirty gallons of gas. “If I go to Lahaina back and forth four times, it gets empty.” Many businesses would pass on the increase in costs to their customers but not Campos. “I can’t increase my prices because I want to serve my loyal customers,” he explains. Campos is not alone in having to withstand the worst of the rising gasoline prices. Every business that relies on transporting goods and services must face the rising cost of gasoline.

But Kahele sees this is an opportunity. “While we feel the impacts now, this moment also presents us a unique opportunity in the long term to divest of Hawai‘i’s dependence on imported energy and invest in a transition to a green economy, which will benefit our local economy and our environment.”

But electric vehicles aren’t for everyone as explained by Menor-McNamara and won’t immediately help the average person. “Electric vehicles are a great and important long-term solution for combating the issues with oil dependency on other countries but based on the current situation in Ukraine, a transition can’t happen fast enough to mitigate gas prices. Transitioning the masses to electric vehicles is going to take years, between the cost of an electric vehicle and the charging infrastructure that needs to be installed throughout the state.”

And if the rising cost of gas and electricity doesn’t cause you enough despair (along with blaming the food supply chain for the lack of your favorite items in your grocery store), the Russia/Ukraine war is reducing the supply of wheat and grain …and it’s hitting home.

In downtown Wailuku, Four Sisters Bakery—started by Stanley Magbual and now owned and operated by his son Arnold and his wife Marjorie—is feeling the consequences of the Russia/Ukraine war. “The war in Ukraine has increased the price of wheat,” explains the younger Magbual. “Plus the cost of propane and electricity has gone up. We were forced to increase our prices a little. Eight pieces of pan de sal has gone up from $2.75 to $3 while our famous butter rolls have increased from $12.50 for a dozen to $13.”

Not to worry, says Magbual. “Despite the slight increase in prices, we’re still competitive. We will continue to be here to serve our customers and share my Dad’s famous Filipino and local pastries.” 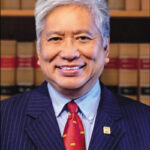 Alfredo G. Evangelista is a graduate of Maui High School (1976), the University of Southern California (1980), and the University of California at Los Angeles School of Law (1983). He is a sole practitioner at Law Offices of Alfredo Evangelista, A Limited Liability Law Company, concentrating in estate planning, business start-up and consultation, nonprofit corporations, and litigation. He has been practicing law for 38 years (since 1983) and returned home in 2010 to be with his family and to marry his high school sweetheart, the former Basilia Tumacder Idica.
Evangelista drives a hybrid.