The summer months are ripe for lazy reading and I’ve always been a sucker for some breezy thrillers or mysteries to wile away the warmer months. If you’re not ready for Elaine Castillo or Jessica Hagedorn, and you’ve devoured local writers Will Espero and Virgie Cantorna’s first novels, are there other Filipino stories worth sampling? I recently picked up the first two books in Mia P. Manansala’s Tita Rosie’s Kitchen series of mysteries, drawn by the obvious Filipino references in the titles: Arsenic and Adobo and Homicide and Halo-Halo (the third comes out in October: Blackmail and Bibinka).

Manansala, a Chicago-raised Filipina American, writes in the “culinary cozy” Mystery sub-genre, what she has described in interviews as Hallmark movies with dead bodies. Think RomCom crossed with an amateur sleuth but with lots of Filipino cooking and references spicing the pages: “Lola Flor pointed to the suman, saying, ‘Sweet sticky rice cooked in coconut milk and streamed in banana leaves. The banana leaves give the rice its distinctive flavor. They’re garnished with Latik. Carmelized coconut curds,’ she added at Derek’s confused look. ‘In the bowl is ginataang bilo-bilo. Chewy rice balls, tapioca pearls, jackfruit, purple yam, and saba banana cooked in sweet coconut milk. The best thing to eat on a cold day like this.’ ”

Manansala’s central character Lila Macapagal is a mid-western Filipina and baking foodie who moves back to Shady Palms, Illinois from the Windy City after breaking up with her cheating chef boyfriend. Ostensibly she moves back to help her aunt Rosie and grandmother Flor run the family Filipino restaurant, the titular “Tita Rosie’s Kitchen” of the series. When her former high school boy friend Derek Winters, now a food blogger and constant critic of Tita Rosie’s food (much of which he has sampled), falls dead while dining at the family restaurant, Lila eventually becomes the prime suspect. Lila is forced to clear herself and find the real culprit, aided and abetted by childhood friends barrista Adeena Awan and dashing lawyer Amir Awan while coping the “help” offered by her circle of Filipino family and godmothers (a trio of Ninangs she calls “the Calendar crew”— their names are April, Mae and June): “ … a bevy of a gossiping aunties, none as loud and nosy as the group of fifty-something-year old women … they weren’t related, but all three of them were completely interchangeable, down to their bad perms, love of floral patterns, and need to provide running commentary on my life.”

The second installment introduces another aspect of Filipino culture — beauty pageants. For a small town (Shady Palms is described as a village of 20,000 or so people), a lot of murders happen.

The writing is light, funny and clever. Noting at one point the disapproving reactions of her Ninangs, aunt and grandmother, Manansala writes, “I don’t know if you’ve ever been stared down by an elderly Asian woman but It. Is. Terrifying. Don’t be fooled by the cute florals and jaunty visors—these women will end you, wielding nothing but their sharp tongues, bony elbows, and collapsible shopping carts.”

She also captures accurately how the Filipino diaspora operates where we’ve settled in this country: “Amir and I managed to catch my cousin Bernadette while she was on break in the cafeteria. I say ‘cousin,’ but we weren’t related by blood. Like most Filipino families, we extended that relationship to any close family friend. So even though I was an only child, I had enough godmothers, cousins, aunties, and uncles to populate a small village.” 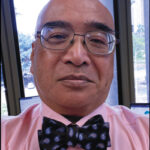