This month’s featured Sakada Offspring is a very ambitious and compassionate young woman, dedicated to her family, her church and her job as a nurse: Monica Elaydo Natividad. From barangay Ansad, San Esteban, Ilocos Sur, Monica was born on August 27, 1969 to Mr. Monico Elaydo Elaydo and Mrs. Gracia Pader Elaydo. She is the youngest child: Leonardo Pader Elaydo, 53 years old, married with three children; and Garizaldy Pader Elaydo, 50 years old, married and no children. Both her brothers are living in the Philippines. Her father is now deceased while her 72-year old mother Gracia is a retired pantry worker at Burger King, Kahului. Although she is retired, Gracia likes to keep herself busy so she decided to go back to work at Carl’s Jr. in Mā‘alaea.

Monica’s Sakada connection is through her paternal grandfather, Crisanto Elaydo Elaydo—Crisanto’s parents had the same last names. Crisanto was a very hardworking man who wanted to provide the best for his family according to Monica’s grandmother, Magdalena Elaydo. That’s why Crisanto left his family in the Philippines and decided to live most of his life in Kualapu‘u, Molokai. He worked at the pineapple plantation all his life while living on Molokai. He kept his promise to his wife Magdalena that he would help raise their grandchildren since his son, Monico, Monica’s Dad, passed away at an early age and when Gracia was seven months pregnant with Monica. Being a compassionate grandfather, Grandpa Crisanto adopted Monica as his own child when Monica was in the 6th grade. He attended Monica’s 6th grade graduation in the Philippines, which was his first visit since he left. He was a proud grandpa for he witnessed Monica’s receiving her diploma as the class valedictorian in 1982 at Ansad Elementary School.

In 1990, Grandpa Crisanto died of a brain aneurysm on Molokai. “I will always remember my grandpa as my hero, a representation of my dad’s love to us,” said Monica.

In 1986, Monica graduated with honors from Valenzuela Community School. In 1990, Monica obtained a Certificate in Pulmonary Therapy from Emilio Aguinaldo College.

Monica’s life took another turn on October 19, 1990, when, with a student’s visa in hand, she left the Philippines, bound to Los Angeles, California hoping to become a USA immigrant to help her mother and two brothers to have a better life. Two months later, Monica had saved enough money for a plane fare to come to Maui. She arrived on Maui on December 19 and met the love of her life, Jorge Natividad and they got married on February 19, 1991.

On Maui, Monica continued her studies at UHMC (Maui Community College at that time) and received her Associate Degree in Nursing in 1994. She continued on to the University of New Mexico in 2004 and received her certificate as a Registered Nurse First Assistant. 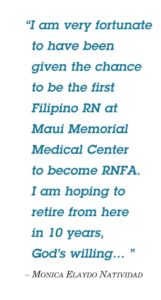 Such an ambitious young woman, Monica is currently working full-time at Maui Memorial Medical Center now known as Maui Health System as RN First Assist (RNFA) in the Operating Room (OR). She’s been employed at the hospital for twenty years. She carries her titles with pride: RN, CNOR (Certified Nurse in the Operating Room), RNFA, ACLS (Advanced Cardiac Life Support), PALS (Pediatric Advanced Life Support), BLS (Basic Life Support) certified. Monica worked very hard to gain these impressive titles. “I am very fortunate to have been given the chance to be the first Filipino RN at Maui Memorial Medical Center to become RNFA. I am hoping to retire from here in 10 years, God willing,” said Monica.

For twenty-seven years, Monica has been married to Jorge Pascua Natividad. He is from Bacarra, Ilocos Norte. Jorge is the son of the late Mr. Perfecto Lacar Natividad and Mrs. Dominga Pascua Natividad. Jorge has worked at the Four Seasons Resort Maui, valet services, since 2001.

Since 1991, Monica and her family are very active parishioners of Christ the King Church in Kahului. She was a chairperson of the Christ The King Church Lector Ministry. Her children also serve as Lectors and Altar Servers. From 2012 through 2016, Monica was a member of the Board of Directors of Binhi At Ani Filipino Community Center.

Monica is a very compassionate and very giving individual. “I strongly believe that giving back to the community is very rewarding,” she said. “I look forward to be involved in Aloha Medical Mission and Operation Smile as a volunteer anywhere in the world as needed but my first assignment will be in my nativeland, Philippines.”

As caring and loving parents, Monica’s and Jorge’s utmost goals, hopes, and dreams are centered toward their children, Ryan and Ria. They want to see their children have stable jobs after obtaining the degrees of their chosen careers. They also want to instill in them the Christian values they themselves learned from their own parents, to enable them to have peace of mind knowing they will become great parents to their children in the future.

Lenten season, especially Easter, has a great impact on Monica’s family. Her family participates in most, if not all, church activities. “Easter is the time to reflect on the resurrection of our Lord Jesus Christ from the dead,” said Monica. “It is time to ask for forgiveness and repent for our sins. It reminds me of the moments when I need to focus on giving up something as a penitential sacrifice to become closer to God. Keeping my Catholic faith with all my heart and soul allows me to praise God and give Him thanksgiving for all the blessings I have received.”