We begin each New Year liturgically by celebrating two important people in the ongoing story of our salvation, i.e., Jesus, the Son of God and Mary, the Mother of God. As People of God, we celebrate the role of Mary as the human mother by which God entered the world. Mary not only gave birth to Jesus, she was his maternal parent and, together with Joseph, they were the first teachers and models for his formation as a human being. Our own parents were also “first teachers” and “models.” So it is fitting I think, that we honor and think of them too in celebrating January 1st and the New Year.

At the beginning of 2020 and pondering our liturgical prayer and life in the church, we can imagine how profound a period of development it must have been for the newborn Jesus. Two passages from Luke’s Gospel give us a glimpse of this profound time. Jesus is described as “growing in grace and wisdom, and God’s favor was upon him” (Luke 2:40) and after his encounter with the scholars in the temple, “he went back to Nazareth and continued to be under their authority” (Luke 2:51). And looking to Mary His mother, Luke tells us that she “kept all these things, reflecting on them in her heart” (Luke 2:18). There is no record of Mary’s reflections, except as evidenced by her influence on the person that Jesus grew up to be in the Gospels. Mary, however, is significant to our salvation as Christians as she plays such an important and primary role in assuring that God not only came down at Christmas but lives with us now as one of us. 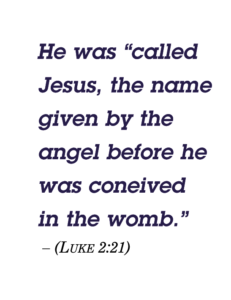 January 1st, besides being the Solemnity of Mary, the Mother Of God, it is also the Feast of the Holy Name of Our Lord Jesus Christ. Both Feasts proclaim Luke’s Gospel during the Mass; for the former (Luke 2:16-21) and for the latter (Luke 2:15-21). For any newborn, the name given is a special event and time in the life of a family. So, from the gospel, we know that on the eighth day after his birth, the Son of God, was named and circumcised. He was “called Jesus, the name given by the angel before he was conceived in the womb” (Luke 2:21). Under the Law of Moses, all male infants were to be circumcised on the eighth day after birth (Leviticus 12:3). It was also customary at this time for family and friends to witness the naming of the child. Thus, the Feast of the Holy Name is celebrated on the eighth day of the Christmas season, which is January 1st. The celebration of the Holy Name reflects the significance of the Holy Name of Jesus, and the Opening Prayer or Collect of the Mass is significant in itself:

Eternal Father, you gave to your incarnate Son the holy name of Jesus to be the sign of our salvation: Plant in every heart, we pray, the love of him who is the Savior of the world, our Lord Jesus Christ; who lives and reigns with you and the Holy Spirit, one God, in glory everlasting. Amen.

We begin the New Year in the bright shadow of Christmas, proclaiming the Incarnation as not only a theological mystery but also what has been called an anthropological breakthrough for all of humanity; to be redeemed by grace, open to mature development and given a divine destiny. Because we believe Jesus to be both divine and human, we have a bridge to God, which is Mary His mother. Our human flesh is united intimately to His as both our brother and the Firstborn of the New Creation.

At the cusp of a New Year, we see a new humanity, in both Mary the Mother of God and in Jesus our Lord. Through both, God sent us a veritable restored image and likeness of God in a world struggling to advance beyond its own self-defeating habits of all that takes it away from God: poverty, war, exploitation, greed, tribalism, nationalism and egoism. Consider that what is at stake is the future of our planet, the peace that is possible for all of us to enjoy, when we turn to God in all that is good and just, perfect and holy.

On January 1st, we see a courageous yet humble Mother; who gave birth to and showed us her son, now with and living among us. On January 1st, we celebrate Jesus, in His Holy Name, the sign of our salvation; who shows us a radical empathy for the poor, the outcast and the oppressed. Join me, during 2020, in reciting and praying Mary’s Canticle, the Magnificat (Luke 1:46-55).

January 1st reminds us—especially these two great feasts of the Church—that in Jesus’ birth is magnified in His compassion for the weak and the hungry, His commitment to God’s justice, His bold challenge to the powerful, His reliance on mercy and nonviolence in the face of arrogance and power, and all that takes us away from God. If this sounds like a New Year’s Resolution, well, it is!