Why do we celebrate Filipino-American History Month in October?

After the many successes of the Filipino American community, how do the youth of our island accredit those before them? Three Filipino students evaluate what it means to be a Filipino American and why they use this month to honor their predecessors.

Keithjan Quilal Lan, a junior at Maui High School, looks back at his identity as a Filipino American. As a Filipino American, Keithjan feels a sense of independence but makes sure to remember where he came from. “To me, being a Filipino American means being independent but at the same time remembering my Filipino roots. It means that I am proud to be recognized as an American, being able to dream big and believe in being successful in things I want to achieve in life,” Keithjan says. Even so, he recognizes what struggles have come with that sense of independence. “However it also means knowing the sacrifices and hardships my family has experienced for me to experience the American dream.”

As somebody who has come so far as to become a build captain during his time in his school’s robotics team, who does he look to as a direct influence of his success here? Keithjan credits his parents as influential figures of his record as a Filipino American. “Throughout my life, I was told of stories about my parents’ sacrifices. Sacrifices that made me and my siblings’ lives so much better. These sacrifices would allow us to move to America. From this, I learned to never take things for granted and to always work hard. One day I hope to repay all of my parents’ hard work and sacrifices,” Keithjan says. Like the Filipino Americans of the past, Keithjan’s parents made monumental efforts to make sure that generations to come can live a life living the American dream.

A beneficiary of the foundation set by the Filipino Americans of the past, Keithjan finds importance in commemorating them. “Celebrating Filipino American History Month is important because it is one of the many ways we as a group can embrace our roots and show our gratitude for those who came before us.”

Czerena Bayle, a senior at Maui High School, leaves her thoughts regarding the virtuous month. Like Keithjan, Czerena looks to her parents as members of Filipino American history that have allowed her to get to where she is today. “My family came from the Philippines in search of a better life and better opportunities. I want to make them proud. I want to be strong just like them. With the promise of the American Dream both sides of my family left everything behind to start anew. My mom went back to high school again and had to relearn everything in a new language. When my dad came to Hawai‘i, he worked three jobs to help support his family while in high school. My parents made and continue to make sacrifices for my sisters and me. I have some of the strongest, hardworking role models ever and I just want to make them all proud.”

With her family in pursuit of the American dream, Czerena has lived up to the standards that her parents dreamt of for her. As Co-President of the Maui High Spanish Club and the Historian of Maui High’s National Honor Society chapter, it is safe to say she’s making the Filipino Americans of the past proud. Continuing on, Czerena would like to make her own contributions to Filipino American history. “I want to be one of the most successful Filipina American journalists or film industry professionals. I want to make a name for myself and acknowledge my background while doing so,” Bayle says.

Newly crowned Miss Maui Teen USA Jaycie Iha, a junior at Maui High School, also took the time to honor her Filipino roots. Jaycie looks to her Filipino American idols as figures who have revolutionized the presence of Filipinos in America. “From my Apo (grandpa) to Catriona Gray to Kesley Merrit; they are all Filipinos who have shown the world that you can do anything and your background will never be something to hold you back from it,” Jaycie says.

A descendant of a sugar cane plantation worker from the Philippines, Jaycie praises her grandpa for embodying the values that she lives by as a Filipino American. “My Apo was a sugar cane plantation worker for the longest time. He was not only my best friend but a role model for me and everyone around him. Through his hard work and dedication, he always inspired me to fight for what I want and that it isn’t always going to be easy at the beginning. It’s inspiring to hear how much he put into his work to do good and make the best life for his family. I know I will always strive to have that characteristic of him, in me.”

Jaycie hopes to use her influence to promote confidence and aspiration while representing the Filipino American community during her time as Miss Maui Teen USA and even beyond. “As a Filipino American, I want to be someone who inspires others to put their best self out there and strive to do anything they want.” Day after day, as she makes history, Jaycie wants to make sure that every Filipino is aware that they are going to be a part of their culture’s history too. “We, as Filipinos, are making history and will continue to. I hope to be a small part of it.”

For her final remarks, Jaycie leaves her words of wisdom to all the Filipino American youths striving to make their mark on Filipino American history. “My advice for all youth is: You are going to change the world. Continue to use your voice, continue to speak your mind and continue to inspire. We are the generation that doesn’t back down and knows what we have to offer. When you feel stuck, try something new and put yourself out there. Never be afraid to break through your chrysalis and become the butterfly you are capable of growing into. Stay authentic, be brave, and continue to change the world. You are beautiful and can do anything anyone else can. Your culture and background should empower and uplift you, never let it make you feel otherwise.” 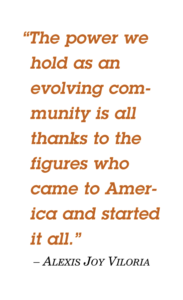 Filipino American History month can mean different things to different people but there is one thing that is universal between all celebrants. The power we hold as an evolving community is all thanks to the figures who came to America and started it all. Whether it be a sailor on a Spanish ship, a sugar plantation worker, or an overseas foreign worker who came to America to build a better life, the actions of courageous Filipinos have allowed this new generation of Filipino Americans to prosper, succeed and live the American Dream. This month is a period of honor for all those who came before us but we must all remember to honor them no matter what month. Filipino American History Month is only the tip of the iceberg when it comes to appreciating who made it possible for Filipino Americans to live in this country of freedom and ambition. 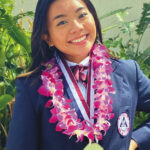