French Impressionist artist Edgar Degas said “Art is not what you see but what you make others see.” Henry Ward Beecher, an American clergyman and social reformer had this to say about artists. “Every artist dips his brush in his own soul and paints his own nature into his pictures.”

This month’s featured Sakada Offspring, Philip Bernaldo Sabado is a well-known Filipino artist not only here on Maui but all of Hawai‘i and the world. His artwork especially his paintings can be seen and enjoyed by many everywhere.

Philip received several Leadership Awards in the Field of Art: 2008 Pundy Yokouchi Award, “Maui Artist of the Year” from the Maui Arts & Culture Committee, 2005 City and County of Maui – “Maui Artist of the Year,” 1982 Selected one of the top 50 Illustrators to study with seven major illustrators of United States in Columbia University, Paris, France. 1980 Selected member of Los Angeles Society of Illustrators. 1979 Selected of Art Directors Club of Los Angeles.

On the local level, Philip Sabado is such a humble, patient children’s art teacher. He can teach art skills even to the most kolohe (naughty), misbehaved kids. With him, they produce beautiful artwork!

Philip’s mother, Severina Blen was originally from Dolores, Abra, Philippines. His father, Felix Sabado was from Santiago, Ilocos Sur, Philippines. They came to Hawai‘i in the 1930s as single individuals. However, according to Philip, there was an incident that happened and that Felix was going to be deported back to the Philippines. But arrangements were made for him to marry Severina so he wouldn’t be deported. That’s how the Sabado Clan began. There were nine children in the Sabado family. Three were born in Honoka‘a, Hawai‘i. Then another three were born when they moved to Kaua‘i. Their third move was at Wailua, O‘ahu and three more were born there. Their last move was to Molokai when Philip was only four years old. Felix Sabado worked in the sugar cane plantation while Severina was a housewife taking care of her household and children. To help with the family income, she took in laundry. Philip mentioned his mom and sisters did the washing and ironing while Philip was the delivery boy.

Felix had a certain talent in making wine from sugar cane and pineapple. He was also a talented musician playing the guitar for his family. Philip claims he learned from his parents the value of togetherness in harmony doing things together as husband and wife till death do they part. He also learned the value of gratefulness, being grateful for the basic necessities of life. He appreciates his brother-in-law Rehino for showing him how to hunt and fish. He was truly his mentor. He also learned from his sisters not to be afraid to take risks. They encouraged him to do what he wanted to do in life. Philip was the youngest of the siblings.

Christine Sabado, Philip’s wife is Caucasian by ethnicity. She is truly, however, a Filipino at heart. She embraced the Filipino culture when she married Philip fifty-three years ago. She wrote a very endearing story about her first meal with Philip’s parents and it is worth sharing. This is her story:

In the kitchen, in the center of the table, sat a large glass that held spoons and forks; rice was served on the sideboard attached to the stove. A steaming bowl of soup with vegetables and pork was placed in the center of the table. The vegetables had an unfamiliar consistency for me. They all appeared very fresh and homegrown, all dark in color, with a texture very different from the Irish boiled potatoes and carrots and common vegetables I knew from my childhood. The strong smell of garlic and ginger root and bay leaf was assaulting all the senses and filling the room as more soup was ladled into the bowl from the steaming pot.

Without protocol Papa, quietly prepared Mama’s plate and carefully placed her rice in the center, a precise mound, a scoop. He then ladled the soup of dark green vegetables from a weathered white ceramic bowl, as the bowl filled, I saw the charming design of golden wheat. Philip followed suit and scooped rice onto my plate as well. Mama sat near the window, directly across from me. I could not keep my eyes from her face. She was glowing and beamed like a proud bird with her family surrounding her, all smiling and fussing about. They were all chirping and busy around us. The lines of age softened on her frail face in the natural glow of the diffused light as golden as the yellow beams that filtered through the checkered curtains. Philip placed my plate before me and ladled more of the soup and vegetables onto my rice and then onto his own plate. He sat between his parents; a brief moment with eyes closed and intoned a pule a prayer before they began eating with great passion.

Suddenly all was silent as every eye in the room intently watched me. Smiling to all present I exclaimed haltingly, “Oh, it looks and smells wonderful.” No one moved to serve him or herself. I glanced at Philip with a questioning expression. He was already engrossed, busy slurping at his soup, showing his enjoyment of the meal. He looked up from his now half-empty bowl and saw my face to say: “They won’t eat until Mama and Papa and we have eaten, as how!”

Christine’s philosophy in a successful marriage is: “When you marry your husband or wife, you are also marrying the whole family.” 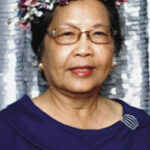 Lucy Peros is a retired schoolteacher, having taught at St. Anthony Grade School and Waihe‘e Elementary School. Both of her late parents, Elpidio Cachero Cabalo (a 1946 Sakada) and Alejandra Cabudoy Cabalo of Hāli‘imaile, worked for Maui Land and Pine Company. Lucy now enjoys retirement and has time to join other seniors in the Enhance Fitness Program under the Department of Aging three times a week. She also attends the line dancing class and other activities at Kaunoa and joins other Waihe‘e School retirees when help is needed at the school. Lucy also devotes some of her time to activities at Christ The King Catholic Church. She enjoys writing and reading in her spare time.