A Closer Look at Dragon Fruit aka Pitaya

Growing up in the Philippines, I have not heard or seen this exotic looking fruit called Dragon Fruit, also known as Pitaya. It was only when I arrived here on Maui that I got introduced to them.

How about you? Are you familiar with Dragon Fruit? When was the first time you have eaten one? Did you like it? Do you like Dragon Fruit now?

Initially, I was a fan of Dragon Fruit only for the way it looks. It is quite intriguing with its brilliant colors and unique shape and texture. However, I found it to be a bit bland. Maybe I just haven’t tasted the right species yet that would please my palette. It has a mild flavor that has a hint of passion fruit (lilikoi), watermelon and raspberries flavor.

From my research, I learned there are various species and one of the species is actually sweet. There is this Dark red (magenta) variety from Nicaragua, there is a white flesh species from Vietnam and there’s the bright pink (fuchsia) from Israel. Interestingly I learned there are now many Dragon fruit Farms here in Hawai‘i and a few of them are here on Maui.

I started learning more about Pitaya and I found out it is a “super food” and there are many benefits to eating Pitaya regularly.

Ocean Robbins of Food Revolution Network shared many of the many benefits of Pitaya. Here are some of them:

1 It contains prebiotics which are good for your gut health. Prebiotics play the role of fertilizer for the good bacteria in your digestive system. Red flesh dragon fruit contains an abundance of oligosaccharides, which are a type of prebiotic.
2 It’s good for your digestion. One cup of pitaya contains seven grams of fiber. This is almost one-quarter of your recommended minimum daily fiber needs.
3 It boosts your immune system. Dragon fruit pulp is rich in antioxidants like vitamin C which is great for your immune system. Antioxidants help your body stave off cell damage and degenerative diseases.
4 It helps prevent and fight cancer. Dragon fruit contains antioxidants called hydroxycinnamates which can help prevent cancer. It also contains lycopene, a powerful compound also found in tomatoes which has been shown to be beneficial in protecting against chemical and natural toxins.
5 It helps stabilize your blood sugar. Not only is the fiber in dragon fruit great for your digestive health but it also maintains blood sugar balance. Adding pitaya to your diet could help steady your blood sugar after eating other glucose-spiking foods.
6 It’s heart healthy. Dragon fruit is a good source of flavonoids which are antioxidant pigments that have a positive impact on heart health. And dragon fruit with red pulp is particularly high in betalains which provide its color and can reduce LDL (bad) cholesterol levels.

And there are more benefits but we’ll stop with six for now. If you are interested, I encourage you to research more about Pitaya and you’d be amazed!

Before I continue sharing about Pitaya, I should answer a question that’s probably in your mind right now. So what really is its name, Dragon Fruit or Pitaya? The answer is both. It is used interchangeably. The name Dragon Fruit had been used since 1963 resulting from the leather-like skin and prominent scaly spikes on the fruit interior. Apparently, when the fruit made its way to Vietnam from Central America, it was called thang loy which translates to Dragon Fruit in English. The name Pitaya (also Pitahaya) was derived from Mexico and in Central and South America, possibly relating to the Pitahaya for names of tall cacti species with flowering fruit.

Did you know there is a Dragon Farm Fruit on Maui called Pitaya of Maui LLC which is owned by a Filipino family? Angelo and Rowena Mariano started this Pitaya Farm back in 2014. It’s an impressive Pitaya Farm organically and meticulously maintained by Angelo and his workers. Their Pitaya can be found in various locals stores on Maui, Asian Mart and Fast Food LLC is one of them. Their Pitaya produce can also be found at Mana Foods, Down to Earth and ABC stores. They are also a supplier for VIP Foods and Kula Produce. As we all know, it is good to buy locally grown produce because it is fresher and you are also supporting the local farmers.

Pitaya is good to eat by itself. However, there are many ways to serve it as well: blended in smoothies, added to topping of açaí bowls, sliced into salad, made into salsa, and I even saw a recipe for a Dragon Fruit Poke! How do you like to eat your Pitaya? Let us know! 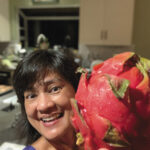