By the time this issue is published, I am confident Joe Burrow will have led my AFC North Division Cincinnati Bengals to a convincing win over the Raiders in the NFL WildCard Round! That will end a long play-off victory drought. The Queen City’s pride has not scored a post-season win since 1991 (eight losses) and has not advanced to the Divisional Round in three decades. And don’t remind me about the two Super Bowl losses to former Bengals assistant coach Bill Walsh.

Even more, Klay Thompson will have returned to the basketball court after spending two years on the sidelines recovering from injuries. He will re-join a Golden State Warriors team that barely resemble the team that lost to the Toronto Raptors in the 2018 Finals, except they’re winning again. And Steph now holds the all-time career record for three-pointers made while Draymond still remains one of the best defenders in the NBA. With a new supporting cast of veterans (Andrew Wiggins, Andre Iguodala, Otto Porter, Jr., Nemanja Bjelica, Kevon Looney, Damion Lee) and young players (Jordan Poole, Gary Payton II, Jonathan Kuminga) for the active Splash Brother, the Dubs have one of the best records to start the season.

But all the good news about sports gets dampened by the ongoing-COVID situation (our transfer portal plagued University of Hawai‘i football team withdrew from the Hawai‘i Bowl when too many players tested positive for COVID).

Twitter claims Joe Burrow, making sure he can play in the WildCard game, is carefully avoiding crowds. In fact, the team ruled out him even traveling to Cleveland for the Bengals final regular season game. COVID has also impacted Golden State. Along with expected injuries for finely tuned athletes, the Dubs have lost certain players to the NBA’s health safety protocol for several games already.

The vaccines work as advertised, although boosters are recommended—lowering the impacts of infection and reducing the numbers required to be hospitalized. All good things. But Pandemic conditions continue. One variant overtaken by another as Delta gets overshadowed by Omicron.

The Omicron variant appears to be spreading rapidly and health providers are preparing for the worst (even as initial data indicates Omicron is more contagious, it also is not causing as serious impacts as Delta, even to the unvaccinated and unboosted). While cautious due to the limited ICU beds we have in our County, our health providers are better prepared and hopefully equipped to deal with a growth in hospitalizations.

But reaction to COVID has shifted. Most of us were able to travel and celebrate the holidays with family after perhaps missing those gatherings over the last two years. We’ve gone out to eat. Our churches, to some extent, resumed in-person services through Advent to the Christmas season. Many have returned to work as the economy re-opened. Visitor numbers to Maui County are close to 2019 even with Hawai‘i’s continuing travel safety protocols for out-of-state arrivals. There’s great resistance to impose another shutdown. And schools re-opened.

People simply are weary of pandemic life. A group even tried to gather enough voter signatures to recall Mayor Michael Victorino just a few months before he faces the primary election in August.

There’s understandable reluctance to close in-person schools and return to virtual learning—even with growing numbers of teachers and other staff calling in sick daily. Most certainly acknowledge virtual learning was not great for Hawai‘i’s students. But it’s unclear whether the experience of the past two school years resulted in any additional planning for expanding or making virtual learning more available and effective.

The approach seems to be wait and see at this point. The Legislature convenes for the new regular session on January 19. At Christmas, the House and Senate, following City and County of Honolulu guidelines, were planning for a re-opened Capitol building. Just a week later, caution required remaining closed and planning for continuing Zoom/YouTube virtual hearings until circumstances change for the better. Here at home, the Maui County Council and County boards and commissions remain closed, holding hearings and meetings on the BlueJeans platform.
But while schools remain open, the MIL has decided to bar fans from high school games.

No one should be happy that we’ve fallen back—but with a vaccine that works and health care better prepared, there is reason for optimism. But it does require the community to remain committed to keeping each other safe. And it requires all of us to exercise continued Common Sense, Courtesy and Caution.

And hopefully we’ll be able to hold a Super Bowl Party in February. WhoDey! 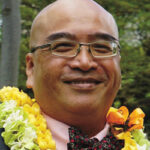