Epiphany—A Sign in the Heavens, Begins a New Year 2023

Our scripture lesson for today concerns three men who saw a sign in the Heavens. That sign was a star leading them to a house where lay the newborn King of Kings.

Welcome to this celebration of Epiphany. When we think of Epiphany many of us think of the celebration of the twelve days of Christmas. The idea of the twelve days of Christmas is based on the tradition the wise men, or magi as they are often called, arrived to worship the Christ child twelve days after his birth. You will remember in Matthew’s telling of the Christmas story, the wise men are said to have gone “into a house where the young child was.” There is no mention of an inn or a stable or even a manger. Of course, there is no mention of twelve days either.

Actually, there is no mention there were three of these wise men for that matter. There could have been five or six wise men or a hundred but I suspect the house would have gotten a little crowded. It’s all tradition, at least in the Western church, but it’s a beautiful tradition and, in the same way the church selected December 25 as the traditional date for Christ’s birth, it selected January 6 as the day to celebrate the coming of the magi to offer their gifts of gold, frankincense and myrrh.

You may have heard about the three six-year-old boys who were playing the wise men in their church Christmas program. As they came up to the place where Mary and Joseph were staying, the first one handed over his present and said, “Gold.” The second presented his gift and said, “Myrrh.” The third one then gave his treasure and said, “And Frank sent this.”

Well, it’s possible one of the wise men could have been named Frank. “And Frank sent this.” After traveling many miles from three different directions, they encountered each other in the desert. They were brought together by that star, and they discovered they were on the same mission. So they banded together to continue the journey. They made their way past the mountains of Moab and past the rebuilt town of Jericho.

Finally, they entered the Holy City of Jerusalem. It was there they were interrogated by Herod. Together they left his court and once again followed the star until it came to rest over the stable of Bethlehem. Together they knelt before the Christ child and offered their gifts. They were from three different parts of the world, their skin bore different shades of color, but they were joined together in their adoration of the Christ Child.

Again, it is only a tradition but it is a good tradition for it speaks of God’s eternal purpose that all people, everywhere, should know of God’s love and God’s salvation. Which brings us to the first thing we need to remember of this Day of the Epiphany. God doesn’t play favorites with persons or nations. That is what Simon Peter discovered according to an important story later in the book of Acts. It was a real struggle for the early church to discern whether their mission was only to Jews alone or whether it was possible for Gentiles to join the family of Christ as well. God showed Simon Peter no one was to be excluded. Christ died for all. That is an important truth of Scripture. 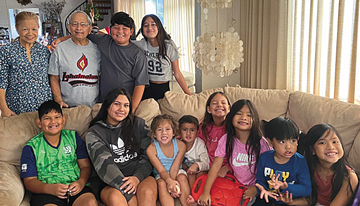 We all know that under the skin, we are one family but prejudices against people of other religions, nationalities and races are as old as human nature. Sometimes, however, God does choose individual persons or nations for a particular task. This is the story of the nation of Israel.

Israel was called to be a light to the nations of the world. They were chosen for this task. It was not that God loved Israel more than he loved the other nations—though Israel often interpreted God’s call in that way. Israel was to set an example of holiness for all the world. When Israel was not faithful to God’s call, God sent a light into the world that the darkness could not overcome. It was the light of Jesus Christ. Jesus then selected some men and women to continue his work of shining God’s light in the world.

That brings us to the final thing to be said about Epiphany. As the church of Jesus Christ, this is our calling: We are to continue the task of shining Christ’s light into the world. The word Epiphany is from a Greek word which literally means “coming to light,” or “shining forth.” As followers of Christ, we are to bring light to the world. Think of the many benefits of light. A lighthouse steers ships away from the rocks. A light bulb lights up a room. A small candle can bring light to a large room.

Light does not exist for its own glory but to brighten up the world. The little spiritual proclaims, “This little light of mine, I’m going to let it shine. Let it shine, let it shine, let it shine!” This proclamation is sung at our 9 a.m. Mass every Sunday, as a blessing for our children, by “The Spirit of Grace Choir” led by Michael Balderas. That’s God’s call to each of us! The wise men saw a sign in the heavens and the world has never been the same!
God’s blessings of love, from our family to your family! Happy New Year, 2023!