One of Maui’s multi-talented individuals is Madelyne Pascua. She was born on July 17, 1964 in Bacarra, Ilocos Norte, Philippines to Leticia and Leonardo Pascua. Unfortunately, Leonardo died from a tragic accident in 1963 when Leticia was three months pregnant with Madelyne.

Madelyne was married to Ray Alvin Pascua on May 5, 1984. He retired from Maui County Federal Credit Union as Chief Loan Officer in 2012. They moved their family from Honolulu to Maui in 1995 to be close to Ray’s parents. Ray and Madelyne are blessed with three outstanding children.

Their thirty year old daughter, Katrina Cassandra Bio is married to Darrel Bio. They have a seven year old son, Dylan Michael Bio. Katrina graduated from Baldwin High School and she is currently employed at Maui Memorial Medical Center, at the OB department.

Madelyne has a Sakada connection through her paternal grandfather, Hilarion Pascua. Hilarion left his wife Pastora, two daughters, and one son (Madelyne’s father) in the Philippines as one of the thousands of 1946 Sakadas who came to work in the sugarcane and pineapple plantations of Hawai‘i. He was employed by the Olowalu Sugar Mill and later with Wailuku Sugar Mill. His wife Pastora and his two daughters joined him in August 17, 1961 but his son Leonardo stayed back in the Philippines to marry Madelyne’s mom Leticia. Madelyne did not meet her paternal grandparents until December 1973, when she, her sister, and mother came to Hawai‘i. Madelyne’s maternal grandparents, Irineo and Faustina Ramos however, were instrumental in petitioning them to come to Hawai‘i.

Madelyne appreciated her paternal grandparents very much. They made sure that she, her mom, and her sister lived a very comfortable life after her father died. Both grandparents wanted Madelyne and her sister to have what they had here in Hawai‘i while they were in the Philippines. So they would send to them care packages of goodies such as chocolates, canned goods, clothes and even those Little Golden Books like Alice in Wonderland, Bambi, Snow White, Cinderella, Pinocchio, etc. Madelyne expected Hawai‘i to be and look like the places in the books. She was disappointed to see that Hawai‘i looked just like where they came from in the Philippines. Madelyne, her mom and her sister lived with her maternal grandparents when they arrived in Hawai‘i but they visited Maui every summer.

Madelyne attended August Ahrens Elementary School, Waipahu Intermediate, Waipahu High School, Kapiolani Community College, UH Mānoa, and Cannon’s Business College. She received her degree in Hotel & Tourism Management and she is also a Certified Bookkeeper. At present, she is the Business and Finance Manager at Christ the King Church.

Madelyne was also one of the contributing writers for the Maui Centennial Celebration Committee’s ANAK book for the entertainment Chapter that was published in January 2007.

The following are Madelyne’s accomplishments so far: Volunteer, Dance Instructor of University of Hawai‘i Maui College Kabatak Club, Founder and Director/Choreographer of Dance International Production, (Polynesian dances were added to the repertoire, therefore the name was changed from Bituing Silangan on September 2004), Founder and Director/Choreographer of Bituing Silangan Dance Company (1996), Former member of Iwalani School of Dance (O‘ahu) for Polynesian dances, Former member of Los Danceros (O‘ahu) for Spanish, Mexican and Hawaiian, Dancer with Filipiniana Dance Company (1976–1995), a dance school funded by the Kalihi Palama Arts & Culture where students receive certificates for their achievements. Her other achievements are: At age 14 (1979), Madelyne traveled with the dance group to Alaska (invitation by the Alaska State Legislature) and Washington (sponsored by the Filipino Community of Seattle) to promote the Filipino culture through dance and music. From 1979–1983, she performed annually in Molokai. She also performed for conventions in Waikīkī, representing Filipino folk dance for an international repertoire under KIKA Production. There was also a bi-weekly show at the Plaza Manila in Kapahulu for tourists’ buffet dinner/show. Besides all of these performances, Madelyne also performed at various Filipino organization sponsored events and private parties.

Dance International Foundation is a non profit 501(c)(3) acquired in 2016. They sponsor scholarship awards from 2008–present, sponsor supplies award 2012–present, and sponsor Mrs. Ambassador of Culture since 2016–present, a fundraiser for scholarship and school supplies.

Dance International Production is a dance group founded by Madelyne, that showcases the different cultures with a repertoire that include dances from the Philippines, Hawai‘i, and Polynesia. The dance group consists of 28 dancers between the ages of 4–27 years old and a Makua (parent) group. According to Madelyne, the uniqueness of this dance group is that all income generated from performances goes toward a scholarship program which is awarded to high school graduating members. In addition to learning the different dances, they are taught respect, responsibility, consideration, cooperation and unity. She encourages the dancers to climb the ladder of success from beginner dancers to becoming a director of their own dance company. Annually, a dancer is selected queen as the ambassador of culture; she is chosen for her knowledge of the dances, both terminology and performance, attendance, participation and academic performance.

Madelyne’s dance group even recorded a Filipino song, composed by Dawn Ferguson and translated in Ilokano by Felipe Babila. The song is included in the album, “Children Singing Peace Around the World.” The CD and video documentaries will be recorded in thirty languages and distributed worldwide and Dance International was the 14th group to record.

From December 16, 2006 through January 6, 2007, forty two dancers, musicians, and chaperones of Dance International Production traveled to the Philippines with the purpose of educating the dancers of their cultural heritage by visiting their mother land. Their itinerary consisted of shows in Bacarra, Laoag, Badoc, Santo Domingo, and San Nicolas. This trip allowed the group to let the Philippines know that the Filipino culture is very much alive here in Hawai‘i according to Madelyne. Of course they were able to share the Polynesian culture through the beautiful dances of Hawai‘i and Tahiti to the people in the Philippines.

Once again, the group traveled to the Philippines in 2014 with the mission of feeding and distributing school supplies to those in need in Caloocan.

In July 2016, the group was invited to perform at the 2016 WEKAF Tournament in Cebu, Philippines. WEKAF: World Escrima Kali Arnis Federation—a multi style Filipino Martial Arts. In addition, as entertainers for the event, they collaborated with WEKAF Hawai‘i to bid for the 2018 WEKAF Tournament venue. With the WEKAF Congress favor as between thirty-three different countries, Dance International co-hosted the event this past July 19–23, 2018 at the Lahaina Civic Center with participants from 14 different countries. 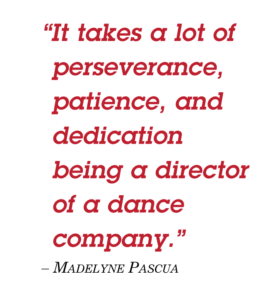 Madelyne had this to share: “It takes a lot of perseverance, patience, and dedication being a director of a dance company. The time spent perfecting a dance and lack of sleep making sure all costumes are done on time for a show is all worth it…the gratifying feeling I get when I stand at the side of the stage and watch my dancers perform successfully. The key to a wonderful group is being unified, being humble and having respect for one another.”

Madelyne would like to extend her warmest thank you to all of her dedicated talented dancers, who have the passion to share the different cultures through dance and music. She also greatly appreciates the committed supportive parents for entrusting their children for her to teach and pass on her love and knowledge of dancing.

Madelyne believes that teaching the different cultural dances is a bridge from the past, to the present and to the future. She wants to promote and perpetuate the cultures: “Although the sugar plantation is all in the past, I am fortunate that my grandfather Hilarion Pascua was part of it and my success here in Hawai‘i is due to his hard work and that will always live in my heart.”