Maui has the lowest voter turnout in the State.

“From the bottom of my heart, Maraming Salamat po and Agyamanak unay kadakayo for your support and the trust you have placed in me with your valuable votes in the primary election,” said Bissen. “I humbly ask for your continued support in the general election on November 8.”

“Mabuhay and mahalo to Maui’s Filipino community for your vote of confidence in the Primary Election,” said Victorino. “I am honored to have earned your trust over the years. I know our home is special. I will always take care of our local people first—every day and always with no compromises. My decisions are rooted in what is best for Maui’s people because at the end of the day, we are all friends and neighbors. You can count on me to always put our community first and I humbly ask for your continued support and vote in the General Election.”

For County Council, every registered voter will be able to vote for the nine Councilmembers whether you live in the Council district or not.

Making it out of the primary for the Kahului residency seat were incumbent Tasha Kama (8,991 votes or 22.8 percent) and Buddy Nobriga (8,738 votes or 22.1 percent). There were 6,459 blank votes, 67 over votes, and 15,225 votes for the five other candidates (Carol Lee Kamekona, Cara Flores, Keoni Watanabe, Tina Pedro and Jack Schwartz). Nobriga is the nephew of Bissen and the scion of the Nobriga ranching and coca cola clan.

(There will also be several Charter amendments questions on the General Election ballot. Those questions will be the focus of a future article in The Fil-Am Voice.) 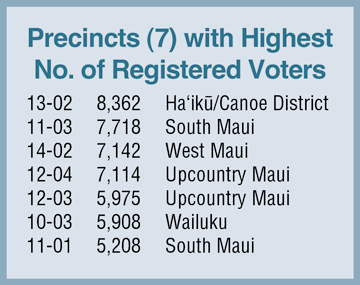 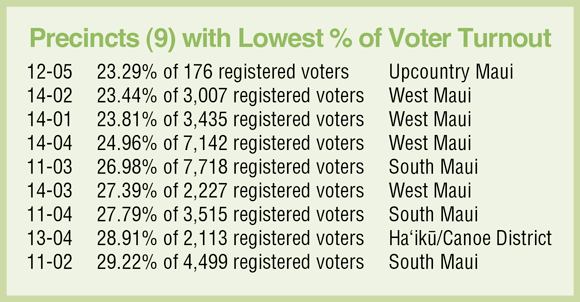 With the number of blank votes and votes for other candidates, it is not a sure thing those who garnered the most for the various County seats will prevail. Additionally, the General Election usually draws more voters, even when there is no presidential election.

But quite a number of registered voters just didn’t return their ballots.

(Remember, if you don’t vote, don’t complain!) Voting is so much easier now with an all-mail-in balloting process and for those who are late, they can still vote (and even register to vote) on the day of the election.

The seven precincts with the highest number of registered voters are highlighted in the blue box.

Of the thirty-five precincts in Maui County, none of them surpassed a turnout rate of 50 percent or more. The nine precincts with the lowest percentage of turn-out (mail and in-person) are indicated in the green box.

By contrast, the seven precincts with the highest percentage of turn-out (mail and in person) are those listed in the orange box.

During the pandemic period, election strategy shifted from old fashioned door-to-door grassroots. Many candidates were wary of going house to house to encourage folks to vote. Likewise, many families did not welcome candidates coming to their homes to talk story.

For the State and Federal races, some political pundits called it the nastiest campaign ever, likely referring to the races for Lt. Governor and Congressional District 2 and maybe to a lesser extent, the Governor’s race.

Lt. Governor Josh Green easily beat his six Democratic challengers including businesswoman Vicky Cayetano (who announced her candidacy in August 2021) and Congressman Kai Kahele (who did not announce his candidacy until May 2022). Cayetano and Kahele—in what they called unprecedented—held a joint press conference on July 27—seventeen days before Primary election day and about a week after voters received their ballot—to question Green’s personal finances. Nevertheless, Green crushed both of them with 60.6 percent of the vote; Cayetano placed second with 20.1 percent of the vote while Kahele received 14.4 percent of the vote. (On Maui, Green received 57.2 percent; Kahele received 23.2 percent while Cayetano received 13.3 percent.) On the Republican side, Duke Aiona easily bested BJ Penn (37,406 to 19,667) and eight others. On Maui, it was closer as Penn received 3,021 votes to Aiona’s 3,573 votes. Penn did not concede.
The Lt. Governor’s race was deemed a toss-up based on the recent polls. Of the six Democratic candidates, four were deemed to be within the margin of error the polls’: House Finance Chair Sylvia Luke, former Honolulu City Council Chair Ikaika Anderson, former Honolulu Mayoral candidate Keith Amemiya and Chamber of Commerce president Sherry Menor-McNamara (of the Menor clan). The race became ugly with Be Change Now formerly known as Pacific Resource Partnership—the Carpenters Union Super PAC—casting aspersions on Luke’s ethics through guilt by association. (The three mailers our household received highlighted the words “pay to play” and “corruption.”) The Carpenters Union endorsed Ikaika Anderson and apparently was furious with Luke’s refusal to make permanent the GET increase for the Honolulu rail project.

For Congressional District 2 (Kahele did not seek re-election because he ran for Governor), it also turned nasty with a Super PAC called “Mainstream Democrats PAC” sending out mailers (our household received four) against former State Senator Jill Tokuda. (Tokuda was no stranger to being opposed by a Super PAC as Be Change Now opposed her in her 2018 bid for Lt. Governor against Josh Green.) Super PAC “Dad for America” sent out pro-Patrick Branco mailers while Super PAC “Congressional Progressive Caucus PAC” sent out pro-Tokuda mailers.

For Maui’s state legislative seats, all three senate seats and six representative seats were up for election due to re-apportionment. In Senate District 5, Gil Keith-Agaran–the only state legislator from Maui of Filipino ancestry—was unopposed and received 7,993 votes (75.8 percent).

In the House, Representative Troy Hashimoto (District 10) was also unopposed and received 4,991 votes. Representative Justin Woodson in District 9 crushed challenger Sam Peralta, 3,033 to 817 and with no General Election opponent, is elected.

Incumbent Kyle Yamashita (District 12) was unopposed in the primary and received 4,961 votes. He will face Republican Dan Johnson (1,145 votes) and Green party candidate Summer Starr (25 votes) in the general.

There was no incumbent in District 11 as Tina Wildberger did not seek re-election (Kelly King initially filed for the race but withdrew and filed for Mayor). For the Democrats, Terez Amato defeated Randal Mahi‘ai (2,709 to 966) and will face Republican Shekinah Cantere in the General Election. Cantere eked out a close win over Netra Halperin which prompted a recount which confirmed Cantere’s victory.

“I’m grateful for the continued support from the people of Central Maui and I’m looking forward to working with the new Maui team—we’ll have a new Senator for West Maui and Waikapū Gardens,” said Keith-Agaran. “I hope Kyle Yamashita will be back—he’s played a strong role in the House for many Maui priorities—and with the changes in the House, we’ll have untested representatives from South Maui, the canoe district and West Maui/Waihe‘e.”

From the perspective of the Filipino community statewide (are we still the “sleeping giant”?), there appears to be a number of losers albeit all but three winners still face General Election races. [See tall blue box]

When asked why Maui’s Filipino community should support them, Bissen and Victorino provided the following responses.

“The Filipino people are known for their industriousness, work ethic, perseverance, determination, love for family and culture, and the value they place on education,” said Bissen. “It is common for multiple families to live under the same roof due to the challenges in buying or renting a home, until a family can save up enough to buy one. It is common for professionals to come from the Philippines and accept a job they are overqualified for just so they are able to earn a living. It is common to have a full-time job and one or two part time jobs in order to make a living and support their families. And to be able to send one or more of their children to a college or university. All locals, including the Filipino community, face the same challenges of trying to pay for housing, food, utilities, gas and other costs of living here. They want their voices heard. Our residents need a safe community, good livable wages, clean water, and a beautiful environment for our future generations. My plan is to raise prosperity for all Kama‘āina residents of Maui, including our Filipino community. My values and plan are consistent with yours. Unlike past promises made and broken, I pledge to give maximum effort to fostering Kama‘āina prosperity.”

“Joycelyn and I are deeply grateful for the close working relationship we’ve developed with Maui’s Filipino community over the past couple of decades,” said Victorino. “We’ve come to respect and admire the Filipino community’s work ethic, commitment to family, entrepreneurial spirit and mutual support for one another. We have personally experienced ‘the heart of the Filipino.’ It has been a joy to participate in your programs and events as an elected official and as a private citizen. Joycelyn and I love to help with the Barrio Fiesta, scholarship programs and pageants, and especially Binhi at Ani’s senior feeding program. Thanks to your support, we are headed to the General Election in November. We humbly ask for your continued support. Maraming Salamat Po!”

Will Maui’s Filipino community be the difference maker in the Mayor’s race? We’ll know in less than twelve weeks. 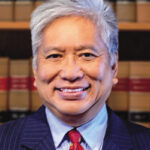