How do you safely celebrate what are, at heart, family holidays in a pandemic? While government and health leaders advised caution, apparently a lot of people decided to “chance ’em.” Judging by the amount of travel and gatherings that occurred at Thanksgiving, Christmas likely will be the same.

Thanksgiving this year meant an intimate dinner with appropriate social distancing and outside as much as possible—not a sprawling throng of the extended clan. But prime rib, baked salmon and freshly caught mū and ham since no one really craved turkey in our family branch, with North Carolina-style candied yams and bean casserole, banana lumpia, blueberry cheesecake, pumpkin crunch, chocolate haupia and custard pie.

For all the seasonal protests that consumerism overshadows any real spiritual content in the weeks between Thanksgiving, Christmas and the Epiphany, shopping this year almost takes on a sense of normalcy—even if much of it will be online. Personally, I’ve never done Black Friday (admittedly, I’m one of those last-minute gift shoppers). After large holiday meals, I like hanging at home, reading a new book or graphic novel or watching parts of the Thanksgiving weekend football and basketball games (but no Maui Classic on island this year).

But I admit being annoyed that Barnes & Noble apparently is NOT shipping to non-contiguous parts of the United States—that means Hawai‘i. So while I was consciously trying to avoid making Jeff Bezos richer, I ordered some gifts on Amazon.

As I’ve written previously, I tend to lean towards what Christian music artist Chris Tomlin says: “I think that deep inside, all of humanity knows there’s truth here, whether they want to admit it or not. There’s a joy that comes in Christmas. There’s a season of giving, so people feel this generosity.” For Valley Islanders, it’s not just a seasonal thing. As Bob Hope once quipped, “My idea of Christmas, whether old-fashioned or modern, is very simple: loving others. Come to think of it, why do we have to wait for Christmas to do that?”

I’m one of those who like the Christmas holidays.

Every December I look forward to seeing “A Charlie Brown Christmas.” It’s one of my holiday traditions.

So I’m concerned AppleTV might hoard it like “It’s the Great Pumpkin, Charlie Brown” for its subscribers. Apple did allow the local PBS station to televise “A Charlie Brown Thanksgiving” so that was mighty civil for an evil corporation.

I have all the Peanuts seasonal cartoons on DVD but it wouldn’t feel the same.

A first world problem, I know.

I spent most of my youth attending Evangelical churches but I’ve come to appreciate the Aglipayan traditions of my Ilokano family. Traditions remain the heart of the holidays. Other customs followed in my family include the Christmas Pageant put on by the children of the Good Shepherd Episcopal Parish and a Carol Sing and Midnight Mass on Christmas Eve—all likely to be observed virtually this year. When the kids are home from college, the Parish Youth usually do some caroling Upcountry and in Central Maui—but with singing banned, we may need to ZOOM. Doris Todd, where I attended elementary school, put on an annual Christmas Program—I still recall the tour de force turned in by teacher Leta Carpenter as the Grinch Who Stole Christmas (suitably Christianized).

Filipinos like me get into all-things Christmas. As kids in Pā‘ia, we had local grown Cook Pine Christmas trees decorated with bright balls and tinsel. My grandfather would make Filipino lanterns from bamboo, twine, colored crepe paper and some rubber cement.

I tried convincing my spouse (a cradle Episcopalian from Texas) that Filipinos begin playing Christmas carols in September because the Christmas season in the motherland begins in the Autumn. She didn’t buy it. In her view, people should follow the holidays in proper seasonal sequence.
But she was nevertheless amused when my mother left the Christmas lights up on her house for an entire year. My mom got new lights this year—something to brighten these bleak recent months.

I would like to see a Christmas Eve table laden with all the traditional holiday food—curry, pansit, baked salmon, sweet Filipino spaghetti, assorted cancanen, ham, prime rib and even a little bit of turkey and gravy. I would expect a lot of leftovers with gatherings still limited to households.

But as this challenging 2020 comes to a close, take time for family and friends and those less fortunate, suffering or grieving during the holiday season. 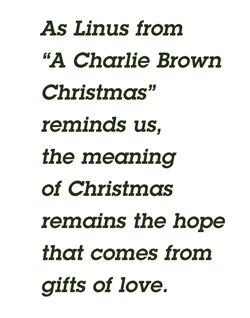 As Linus from “A Charlie Brown Christmas” reminds us, the meaning of Christmas remains the hope that comes from gifts of love:
And it came to pass in those days, that there went out a decree from Caesar Augustus that all the world should be taxed. (And this taxing was first made when Cyrenius was governor of Syria.)

And all went to be taxed, everyone into his own city. And Joseph also went up from Galilee, out of the city of Nazareth, into Judaea, unto the city of David, which is called Bethlehem; (because he was of the house and lineage of David:) To be taxed with Mary his espoused wife, being great with child.

And so it was, that, while they were there, the days were accomplished that she should be delivered. And she brought forth her firstborn son, and wrapped him in swaddling clothes, and laid him in a manger; because there was no room for them in the inn.

And there were in the same country shepherds abiding in the field, keeping watch over their flock by night. And, lo, the angel of the Lord came upon them, and the glory of the Lord shone round about them: and they were so afraid.

And the angel said unto them, Fear not: for, behold, I bring you good tidings of great joy, which shall be to all people. For unto you is born this day in the city of David a Saviour, which is Christ the Lord. And this shall be a sign unto you; Ye shall find the babe wrapped in swaddling clothes, lying in a manger.

And suddenly there was with the angel a multitude of the heavenly host praising God, and saying, Glory to God in the highest, and on earth peace, good will toward men. (Luke 2: 1–14 KJV) 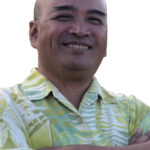 Gilbert S.C. Keith-Agaran grew up in Pā‘ia and Kahului. Don’t tell his wife but he still subscribes to the Filipino notion that Christmas songs are entirely appropriate listening in any of the -ber months (September, October, November, December). He represents Central Maui in the Hawai‘i State Senate. 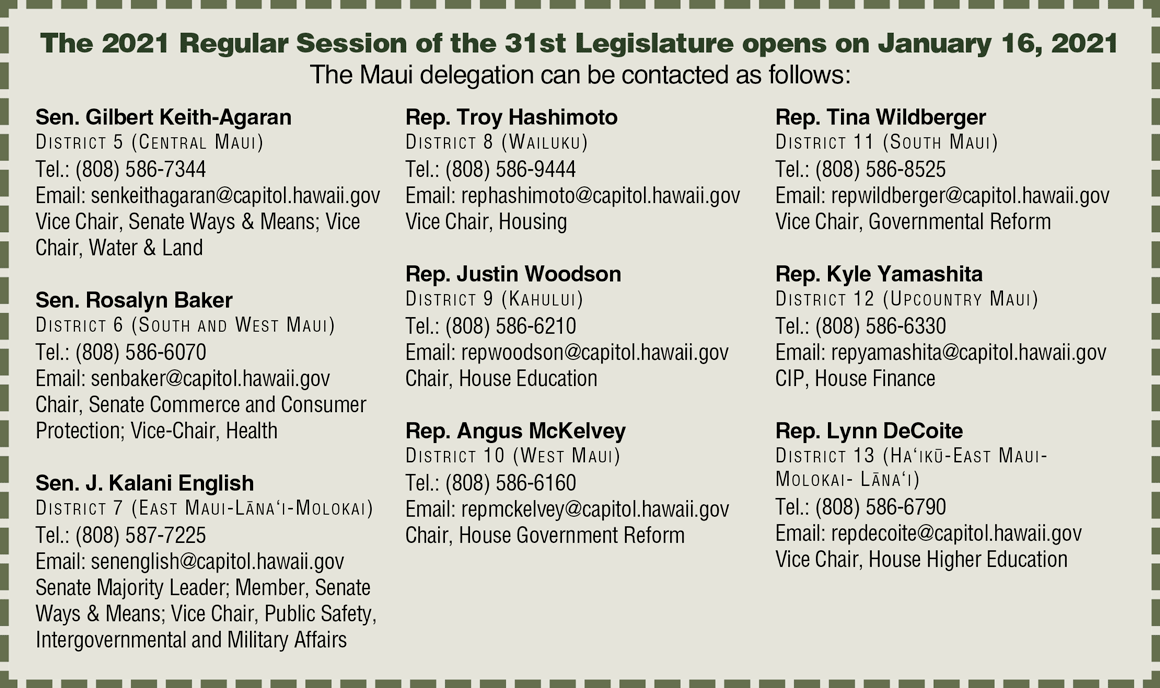