One of the world’s oldest holidays celebrated on October 31 is Halloween. It is easily one of the most popular holidays in America today. Today, people celebrate Halloween through various activities such as children going from house to house “trick-or-treating,” parades, bobbing for apples, and other family-friendly activities. However, the origins of Halloween can be traced back 2000 years back to the ancient Celtic festival known as Samhain celebrated the night before November 1. On the night before Samhain, the veil separating the world between the dead and the living would be lifted. Spirits could walk the earth once again as ghosts or spirits. Food and wine were everyday things that people would leave on their doorsteps to keep the spirits at bay. They would also wear masks as a form of disguise in hopes of fooling the roaming spirits that they were fellow ghosts. The Christian Church turned Samhain into All Saints Day or All Hallows Day in the 8th century, which later became shortened to Halloween.

In Latin America, Halloween has a different name, Dia de Los Muertos originated in Mexico. Dia de Los Muertos is also known as the Day of the dead. It takes place on the first and second days of November. The Mexican custom combines an indigenous Aztec ritual with Catholicism brought to the region by Spanish conquistadors. Dia de Los Muertos is a celebration of the lives of the deceased in addition to celebrating with food, drinks, and activities the dead enjoyed in life. Families clean and decorate grave sites of loved ones. Most homes contain an ofrenda or small altar honoring people from the family who’ve passed away. Some of the popular symbols of Dia de Los Muertos are calacas and calaveras (skeletons and skulls). They are decorative pieces in sweets, dolls, and parade masks. Based on popular belief, on Dia de Los Muertos, the dead awakens from their eternal sleep and walk amongst the living and celebrate with them.

Much like Latin culture, the Philippines assimilated to the many traditions brought over by the Spanish conquistadors. Filipinos are not prominent on the trick-or-treating aspect of Halloween but rather honor departed members of families during Undas. It is the Philippines term for celebrating both All Saints’ Day on November 1 and All Souls’ Day on November 2. About a week before Halloween, an intensive cleaning process begins in the cemeteries that hold our loved ones. Graves receive fresh coats of paint, the grass cut, shrubs trimmed, paths swept, and graveyards are now beautified. These are some tasks required to prepare the cemetery for mass visits that occur on the 1st and second of November. By November 1, people who come to pay respect to their beloved dead flood the cemeteries. Since the Philippines is a predominantly Catholic nation, this event is very significant to Filipinos. It becomes a mini-reunion where relatives unite in honoring their deceased by visiting them and reminiscing the life they lived. Most families bring flowers, light candles and say a prayer when paying respect. Others stay longer; some even bring food and other items that will keep them out of boredom, especially when bringing kids.

Breanna Taguchi’s favorite part about Halloween is getting to spend time with her beloved family and seeing the fantastic and creative costumes they decide to wear. Some of her favorite Halloween rituals are trick-or-treating, carving pumpkins and so many more. Now that she’s older, she doesn’t celebrate Halloween as much; for example, Breanna doesn’t go trick-or-treating or dressing up in costumes anymore. However, she is a believer in everything dealing with mythical creatures or ghosts. Breanna said, “I believe that anything could be out there and I’ve always left that part of my mind to explore the possibilities of new things.” A scary story or superstition she still believes today would be the black cat. “I used to hear about Halloween when I was little was that if you were to see a black cat that it was a sign of bad luck or that something terrible would happen to you. I used to go trick-or-treating and always look out for black cats and it used to freak me out. The story is similar to a story about Friday the 13th and the superstition of the black cat,” she said.

Angeline Cayetano likes dressing up for Halloween in various costumes because she loves being the one with a unique outfit. One of her favorite Halloween rituals is carving a pumpkin. However, this tradition changed from when she was little because her family doesn’t have time to buy a pumpkin and cut it anymore. When it comes to the supernatural, Angeline is a firm believer of the other side but she believes in her Lord and Savior Jesus Christ. When she feels uneasy about a particular location or with people, she prays to Jesus to bring her comfort. One of the bedtime stories told to Angeline by her parents was of a boogeyman. She said, “I remember my Mom always telling me the boogeyman is in the closet and if I don’t brush my teeth after Halloween, the boogeyman will come out and take away my teeth.”

Luzcilla Roflo said, “My favorite part of Halloween is everyone’s spirit because everyone’s all full of life and are having fun.” When she was little, she would dress up every year and go around the neighborhood to trick or treat. In contrast, now she doesn’t really dress up and go out anymore but sometimes Luzcilla accompanies her little brother to go around her neighborhood and sometimes Maui Lani to trick-or-treat. Growing up in the Philippines, she’s learned of monsters like tikbalang and manananggal and up to this day she believes in them but thinks they only exist in the Philippines. Luzcilla said, “I lived in the rural area of the Philippines so there were lots of trees and it gets really dark at night. Growing up, my family members tried to prevent me from going outside and playing at night by saying that if I ever go outside a tikbalang, a creature with a human body but with a horse head or a manananggal, a blood-sucking monster will try and come eat me. That’s why I used to be scared to go out at night without an adult with me.”

Much like every other holiday such as Christmas and New Year’s Eve, the way people celebrate Halloween has changed significantly. What once was an annual event filled with superstitions and supernatural beliefs, it is now a family-centered and kid-friendly holiday that mocks the spiritualistic idealism of the medieval era. Originating from Europe, its influence has spread into different corners of the world. Various countries have created and developed their twists and flavor into the annual holiday. In the United States, people go door to door, house to house to ask for sweets, an activity called trick-or-treating. In Latin America and Asia, the living dance and party with the dead at their final resting place. From the bright, orange, ghoulish carved pumpkins to the cavity-inducing treats, Halloween is a holiday that welcomes all of its celebrants no matter the age, gender, or culture. 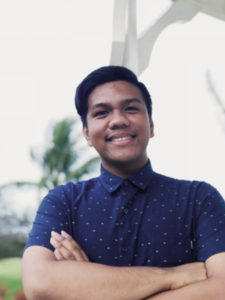 Google® Is Not Everything … is a monthly column authored by high school students. The title of the column emphasizes that education is more than just googling a topic. Google® is a registered trademark. This month’s guest columnist is Ghenesis Jhay Balaan, a Senior at Maui High School attending its Culinary and Health CTE Pathway. He is a three-year member of Health Occupations Students of America (HOSA) and served as its Council Treasurer in 2017–2018. Ghenesis hopes to become a respiratory therapist in the future. He is the eldest son of Benjamin V. Ballesteros Jr. and Jerameelyn B. Ballesteros.