Age is liberating.
My 88 year old mother nowadays speaks what she’s thinking, just as she’s thinking it.
As we’re driving past some young adults apparently idle in the middle of the day on, she points her chin at them and comments, “You get big body, you should go work.”
Younger folks tend to keep some instant observations to themselves.
My mom reflects her generation’s attitude towards having a job.
The older generations in our community, Filipino, Japanese, Chinese, Korean, Portuguese, all value work. 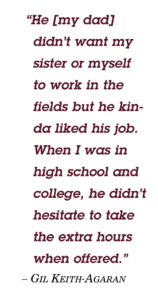 Many of them moved to Hawai‘i for jobs. For the fading ranks of Sakadas—20th Century Filipinos contract workers—that meant long hours for little pay in the sugar and pineapple fields throughout the islands. Physical. Hot. Dusty.

My mom arrived in the 1960s and married my Sakada father. Her work was as a trimmer at the old Maui Pine Cannery. Hot. Noisy. Repetitive, although folks tell me my mom could still be mischievously funny and even naughty during working hours.

In high school, summer also meant work for many of my schoolmates. The Cannery offered lots of jobs and a chance to make a kid “good money.” And everyone seemed to be there. Some teachers were even supervisors (I assumed back then that all teachers had at least two jobs during the year and then a summer job at the Cannery).

I don’t recall getting an allowance from my parents or my retired grandparents who raised me. If I wanted something that they couldn’t make or cook themselves, I could have it if there was extra money. So summer work offered a chance to have my own money for the first time.

I opened my first bank account at Honolulu Federal Savings and Loan so I could deposit my pay checks. It was my mother’s idea—left to my own devices, I would have spent the entire amount. I still have accounts at what has now evolved into American Savings Bank.

I come from a long line of farmers.

Full blooded Ilocano farmers at that.

Ilocanos think of themselves as industrious, unafraid of hard work.

My Dad spent his entire working life with the sugar plantations. He finished 39 years with HC&S and ended as a mobile irrigator for the fields outside of Pā‘ia along Hāna Highway to Baldwin Park. The money he received and saved over the years was enough to buy a house in lower Pā‘ia and then the Kahului home where my mother and sister still live.

He didn’t want my sister or myself to work in the fields but he kinda liked his job. When I was in high school and college, he didn’t hesitate to take the extra hours when offered. In retirement, he looked for odd part-time jobs until he physically couldn’t work anymore.

During summers in college, I studied or worked in Honolulu and lived with relatives. Everyone had jobs. One of my uncles was a carpenter. He introduced me to the concept of the union bench. He didn’t always have work but when he did, he got a lot of hours. When I first moved home to practice law, he was away working on a job in Guam or Saipan. He went where there was work.
Our community still defines and often values people by their work.

You develop social networks through work. Your self-esteem in many ways is reflected in whether you like your current job and your fellow employee and your boss.
My family still looks at getting secure employment as a primary goal in life.

Most of my work life since college has been office work. Usually an air conditioned desk job. Tucked-in aloha shirts and the occasional coat and tie. I have a computer and iPad rather than a hoe or sickle.

I’ve also held appointments at the State Department of Land and Natural Resources and Maui County Department of Public Works and Environmental Management. Both agencies employed people across the spectrum of jobs—we had planners and engineers and clerks but we also had laborers and maintenance for forestry, state parks, highway, refuse and wastewater. I expected all the employees to perform whatever job they had well.

My jobs put me in contact largely with the white collar positions but I was keenly aware that what our people in the field did is what most residents would experience, and comment on. We heard about bathrooms at State Parks, disrepair at boat ramps and harbors, illegal net use at shoreline fishing areas, making hiking trails passable, fixing potholes in county roadways, fielding calls both late or missed refuse collection, and dealing with smells and spills from the wastewater plants.

When there were forest fires, many of DLNR’s laborers also became fire fighters. I also learned that in hurricane and storm season, many of our highway maintenance folks would be on call to clear drainage ways and gulches and to patch up roads.

Each year, the State and County honors employees—recognizing the folks in the field as well as the managers and office workers.
So in my experience, all kinds of work is important.

I allow that some may have jobs that don’t have the traditional eight-hour daylight work day, and a week day may be part of their “week end.” My sister used to miss church because of her regular hours at Blue Hawaiian Helicopters. But I understand what my mom means when she comments on healthy people hanging idly on the streets.