For many of us, music is like a constant companion. It can bring us joy and motivate us, accompany us through difficult times, and alleviate our worries. Albert Einstein once said: “If I were not a physicist, I would probably be a musician. I often think in music. I live my daydreams in music. I see my life in terms of music.” Even Maria Von Trapp, matriarch of the Sound of Music family said: “Music acts like a magic key, to which the most tightly closed heart opens.”

What Maria Von Trapp said is so fitting to describe this month’s featured Sakada Offspring, Rodney Benjamin Uluwehi Guerrero because in the year 2000, he released his second album, “In My Heart” which garnered Male Vocalist and People’s Choice. Most of us locals fondly know or call him just Uluwehi, our very own beloved, honed and refined Maui Entertainer.

Uluwehi was born on November 19, 1958 in Wailuku, Maui, Hawai‘i. He attended St. Anthony Catholic School from Kindergarten thru third grade and Kahului School from 4th grade to 8th grade. He graduated from Maui High School, Class of 1976. He attended Maui Community College with an emphasis in Hawaiian Studies. He received his Bachelor’s Degree in Art from Wesleyan University and his Masters Degree in foreign language education.

From the age of 12, Uluwehi started working by first delivering newspaper in Kahului with his brother Kevin. At the age of 14, he went to work in the fields picking pineapple in Upcountry Maui for two years. It was a very hard labor according to Uluwehi. He also worked as a store clerk for Mrs. Gouveia at the Economy Store in Pa‘ia, riding his bike from Hali‘imaile and back every day after school. At age 17, he went to work for Dollar Rent A Car where the Marriot Courtyard Hotel now stands. He worked washing cars and worked his way to car rental clerk and then as office manager for the Travel Department of Roberts Hawai‘i in the Kahului Airport which lasted for 23 years. Uluwehi is the owner/president of Openeye Tours LLC and Kaulupono Music.

All the while, he had a growing love and appreciation for Hawaiian Music and culture. In 1978, he answered a newspaper ad and became a student of hula which paved the path of his life’s journey. He then joined Halau O Ka La, instructed by Kumu Hula Peter Pekelo Day of Ke‘anae, Maui. In 1980, he became Co-Kumu Hula of Halau Ka Makani Wili Makaha O Kaua‘ula alongside Kumu Keali‘i Reichel, which blossomed for 20 years. They were known as Rodney and Carleton. They became one of Maui’s most decorated halau hula at the King Kamehameha Chant and Hula Competition on O‘ahu, and the Ka‘anapali Beach Hotel’s Hula O Na Keiki Competition on Maui. Today Ka‘anapali Beach Hotel is considered the most Hawaiian Hotel on Maui. 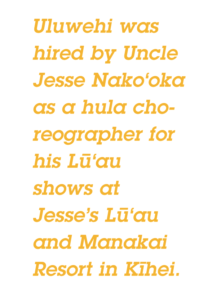 Uluwehi held a second job after finishing his day job at Roberts Hawai‘i. He was hired by Uncle Jesse Nako‘oka as a hula choreographer for his lu‘au shows at Jesse’s Lu‘au and Manakai Resort in Kihei. He was also the emcee and show coordinator at the Stouffer Wailea Beach and the Intercontinental Hotel. It was during that time that Uluwehi honed his skills from musician and vocalist to become an entertainer, doing everything from musical arrangements to costumes and choreography. “Working at Roberts Hawai‘i and instructing a hula hālau was a full time commitment and a lifetime of dedication,” Uluwehi commented.

In 1995, Uluwehi released his first recorded CD album, “Ka Manawa Pono” which earned two nominations for Male Vocalist and Most Promising New Artist at the Nā Hōkū Hanohano Award. In 1997, he performed at the Carnegie Hall in New York City to a sell out audience. In 2000, he released his second album, “In My Heart” which garnered Male Vocalist and Peoples Choice Award. He also received a proclamation from the County Council and Mayor of Maui. In 2009, he released his third album, “Na Mele Hula Aloha” winning for most Hawaiian Album and Liner notes.

In 2015, he was asked to be the headliner performer for the Presidents Ball in Pasadena, California for the Rose Bowl Tournament of Roses Parade. In June 2016, he was honored at the Maui Filipino Chamber of Commerce’s Gintong Pamana Leadership Awards. He humbly accepted the award and shared it in memory of his Sakada Grandparents, George and Mary Guerrero. In 2018, he released his fourth album, “E Mau ana ka Ha‘aheo” which was nominated for Hawaiian Album of the Year.

For the past 25 years, Uluwehi has traveled all over Japan, holding sold out concerts and hula workshops. He also traveled across the continental U.S., Canada, and Taiwan. He visited Rome and Venice Italy, Greece, Egypt, Paris, France, Montenegro, Monaco, Israel, Bulgaria, Germany, Austria, Thailand and Cambodia.

Uluwehi has very high regards to his grandmother, Mary Cabacungan Guerrero. He was very close to her. He shared this about her: “My grandmother Mary Guerrero was my rock and supporter during all the years of growing challenges. She encouraged me and taught me, lifted me up when I was down, and celebrated in the silence of the shadows when the light shined on my accolades. I learned many things including how to cook and sew from her skills as a homemaker and master seamstress. She was a humble caring, loving, and strong Filipino woman, to whom I was proud to call her Gramma.”

Uluwehi is fortunate to have two Sakada Connections. His grandfather George Guerrero came from Bacarra, Ilocos Norte, Philippines. He left the Philippines at age 25 in 1926 to find a better life for himself and for his family.

Upon arrival on Maui, George Guerrero worked as a field laborer for HC&S. He then learned to drive the bus to transport field workers to and from work within the camps. He later went to work at the Nagatani Store in Waikapi;. He also worked for Camp 5 Plantation Store. The jobs that George undertook became the stepping stones for him to be an entrepreneur. He was one of the first Filipino businessmen on Maui. In 1945, George saved enough money to open his own general store in Happy Valley, Wailuku which was located at the end of Market Street across the former T.K. Supermarket. He operated his general store successfully for 25 years until his retirement in 1970.

Uluwehi’s great grandfather and great grandmother, Ruperto and Dionicia Cabacungan also came from Ilocos Norte, Philippines in the 1920s for labored work in the cane fields of Hawai‘i. His grandfather George married his grandmother Mary Cabacungan, Ruperto’s daughter in 1934. Mary was the second eldest of 12 children. According to Uluwehi, he affectionately called his great grandpa Ruperto, “Lelo.” He was a very quiet, strong man, working and providing for his large family earning $1 a day toiling in the cane fields as laborers carrying sugar cane on their backs, hapai ko. He acted as a midwife, delivered 10 of his children at home on Mokuhau Road where it still stands today. He never drove so he walked everywhere. He lived to be 101 years old. Uluwehi was the first and oldest great grandchild of his 400 descendants. In 2016, Uluwehi hosted their Cabacungan Family Reunion on Maui to honor them.

“Being the oldest child, grandchild, great grandchild, I was exposed and witnessed the hard work of my great grandparents and grandparents,” shared Uluwehi. “I followed them everywhere. The family values, work ethics, honesty and integrity as well as being a contributor to our Filipino community was important in our upbringing. Something that I carry in my life filled with gratitude as I travel the world sharing my love for music and Hawai‘i, I am reminded of the sacrifices made by my great grandfather and grandfather who were the Sakadas to help shape the future and foundations of Filipino culture in Hawai‘i. I stand firm and proud in their footsteps and thank them and God almighty.”

This year 2020, marks Uluwehi’s 40th year Hula culture on Maui. He spent much of his life teaching and sharing the values, history and protocols of Hula and traditional Hawaiian Music. On this journey of his, thousands of students have passed thru the doors of Halau Hula Kauluokala; on Maui, Japan, Taiwan and the continental U.S., taking him far beyond the shores of Hawai‘i.

Uluwehi’s personal advice to young people is: “Never be afraid of hard work. There will always be challenges and they are all lessons which opens another door of opportunity. I am forever grateful and acknowledge the sacrifices my Filipino ancestors have made for me to grow with a rich culture and family values and the pride of being benefactors of the legacy of the Sakadas.” 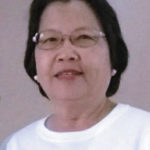