“Adda baket! Adda baket!” screamed the three-year-old boy when he was awakened by a vision of a lady in the bedroom. His parents woke up to the little boy’s screaming but did not see any lady. A month or so later, a letter arrived from the Philippines which enclosed a photograph of an open casket. The little boy pointed to the photograph and said that was the baket.

That little boy was me … and my paternal grandmother, Petra Acang Evangelista, had apparently visited us when she had passed. At that age, I didn’t know what a ghost or spirit was. I just saw a vision and was so afraid, I was screaming my head off.

“When I was young in the Philippines, I was probably four or five years old, when we used to play outside at night,” said Araceli Urban. “On the way home, on the side of the house, there was a tree. I saw someone sitting on the trunk of a tree. I looked at it. It was like a small boy. I looked straight. He didn’t move. My hair was standing. It was a very small boy. I remember it vividly. I can’t forget.”

Sometimes, it’s not what you see but what you hear. “When my Uncle died, my family forgot to take out his shoes so he was buried with his shoes,” said Dulce Karen Butay. “On the third day after he was buried, we heard footsteps going down on the stairs at midnight.”

Butay’s story reminds me of a former client of the law firm I first worked at. The client was killed by his wife. The client was quite a large man and when he walked down the stairs in the office, the stairs would creak a certain way. After his death, the attorney assigned to the case would be working late at night and would hear the creaking sounds on the stairs.

With All Hallows’ Eve (October 31), All Saint’s Day (November 1) and All Soul’s Day (November 2) approaching, I’m reminded of the many stories of ghosts and spirits I’ve heard over the years, many from my Mom.

My Mom recalls that when she was watching television in the Spanish B camp, she saw a headless white dog in the living room. She screamed so loud the Japanese neighbor came by and my Mom told him what she saw. The Japanese neighbor confirmed the prior occupant had seen the headless dog. My Mom would see the headless dog four more times before the family was able to move to a different house near the Tournahauler Road.

My Mom also claims there was an obake in the house near the water heater—a lady with long hair. She would tell my Dad, “Lakay, adda labang.” My Mom also told me stories about her travels to Lahaina. My Mom used to make kankanen and would sell them in Lahaina. She told me how one time, right by the tunnel, she saw a naked white lady, with white long hair down to her okole climbing the tunnel. My Mom claims I was with her along with my sister Estrelita. My Mom says Gloria didn’t want to come because Gloria said she was scared she might see a ghost. But my Mom was prepared because, as she said “I had my buneng which was my anib.’ During another trip to Lahaina, my Mom and Dad were driving back to Pu‘unene almost near the tunnel when they saw a ring of fire—a fireball—that my Mom described as “a very bright bigao.” My Mom was about to scream when my Dad told her to hush. “I had a match,” my Mom says, “so I lit it after we passed it. It’s a good thing we didn’t run over it; we just passed over it. If we had run over it, we don’t know what would have happened.”

Although my 95-year-old Mom Catalina Gonzales Evangelista can no longer remember all the details to the ghost stories she used to tell us when we were young, I still remember a few. My mom told us when she was driving in the Pu‘unene plantation villages near the ditch by the old hospital, her car would suddenly stop and only if she lit a match would the car restart. My Mom claims she would see shadows that would suddenly appear and disappear.

On nights when she would pick up my Dad who was working the late shift at the H.C.&S. mill in Pu‘unene, my Mom claims she would see a “white lady” with long white hair and long earrings walking on the concrete bridge near our house in Paukukalo that crossed Iao Stream. When she would arrive at the mill, she would see a male shadow with a pointed hat. She refused to get out of the car and suddenly the man disappeared. My Dad was inside the mill, waiting for my Mom. “He was so napuntot that I didn’t go in the mill,” my Mom said. But when my Mom explained, my Dad acknowledged there were labangs around and so his fury subsided.

All these stories that my Mom told me as a kid, made me very scared at night.

I admit that at night, I slept with the blanket over my face, with just a small opening to allow me to breathe. Sometimes, I had such a hard time breathing because it felt like someone was on top of me. Only when I became an adult did I learn about bed pressers and only then did I realize that I must have been victim to a bed presser. After all, we lived in Paukukalo and there’s a known heiau less than a mile from where we lived.

In Hawai‘i, you often hear of obake and other stories, including stories of the Night Marchers, who according to Wikipedia “are the deadly ghosts of ancient Hawaiian warriors. On the nights honoring the Hawaiian gods Kane, Ku, Lono, or on the nights of Kanaloa they are said to come forth from their burial sites, or to rise up from the ocean, and to march in a large group to ancient Hawaiian battles sites or to other sacred places. Legend says the night marchers are normal-size warriors, dressed for battle, carrying spears, clubs, and some are beating war drums and blowing tones from conch shells, to announce the advancing of their march.”

While I personally have never encountered night marchers, Rev. John A.H. Tomoso relayed his own personal experience: “When I was in Graduate School at UH-Manoa, I was asked to consult with a group of Native Hawaiian Practitioners who were meeting to discuss oral histories and to contribute to an anthology on native spirituality. The subject of The Night Marchers came up and I led several group discussions on what was experienced by these Practitioners,” Tomoso recalls. “I asked to visit a place where these ancestral beings were frequenting, which we visited several times in the daytime and at night. Upon arrival at this place, we performed proper protocols and made ourselves comfortable and allowed ourselves to feel, hear and even see these beings. I can say that after visiting this place four times, I was privileged to hear my ancestral beings speaking about their need to be there with us. At our last visit, which was in the daytime, I heard them tell me to move on; that it was right for me to do so and that I was not to be afraid as they were one with me. In our debriefing of this visit, several others heard the same thing, especially that these ancestral beings were one with and just like us. So, I know that these Night Marchers are with us and should never be impeded but allowed to move through.”

The phenomenon of Night Marchers has even reached Hollywood, with an independent movie by the same name. First distributed in 2001, an updated version is being released in late October starring Maui resident Anuhea La and Hawai‘i island residents Po‘ai Suganuma and Keali‘i Kanekoa.

Not all spiritual beings are of the scary type. Many appear in dreams; often after the family member’s death.

“My Dad passed away on October 18, 1993 at 4 p.m.,” recalls Butay. “That night, he appeared in a dream. He told me to go with him, grabbed my hand and led me to the stairs. I took his hand and started to follow him. My foot was on the first step of the stairs when one of our relatives saw him holding my hand, trying to take me with him and said, ‘Oh look, he’s taking her.’ As soon as my Dad heard it, he let go of my hand and I woke up.”

“My Mom passed away in the Philippines,” said Araceli Urban. “After we brought her body back to Hawai‘i, the day after we buried her, we saw her waving at our home. She was in the air. She was so happy. She was wearing red. It made me feel better to see her happy.”

Tante Urban recalls seeing his Mom the day after she passed away. “The day after my Mother passed, she was walking up the stairs at our apartment and what I saw was she was waving and smiling at me.” Tante’s Mom would also communicate to Araceli in a dream. “In my dream, she said ‘It’s not goodbye. I’m happy where I’m at. Don’t worry. Go ahead and do your cooking,’” said Araceli Urban.

Even years after a family member’s death, visits happen. “A month before I was going to the Philippines for the first time after living in Hawai‘i for ten years, I would dream of my Dad waking me up for a month,” said Butay. “He would say ‘Wake up. You’re going to be late again.’ When I awoke and looked at the clock, it was exactly 7 a.m.; I’m really late for work and I still have to drop off my daughter Kate at Lihikai School. For a whole month, he was waking me up or he was in my dream. When I went to the Philippines, my main agenda was to visit his grave, where I lit candles, brought flowers and said a prayer. After I came back from the Philippines, he didn’t visit me in my dreams that often anymore—only once in awhile when I cook pansit and adobo on his birthday. He would visit me in my dreams and say, ‘Thank you for the pansit and the adobo you cooked. It’s good.’”

During his high school English class, my son Christian used my Adda Baket experience as the basis for a short story. He tells me a lot of his classmates were spooked.

When I look back and think about it however, my Grandmother Petra did not come to scare me or my parents. She came to visit us out of love and concern. She had not seen her son Elias for over fifteen years and heard Elias and Catalina had a young son named Alfredo, as well as daughters Gloria and Estrelita, in addition to Rogelio who was born in the Philippines. She came to say goodbye … even though we never met. It was pure love.

As Tomoso says “They are not to be feared but accepted, listened to and appreciated for the ancestral beings that they are.” 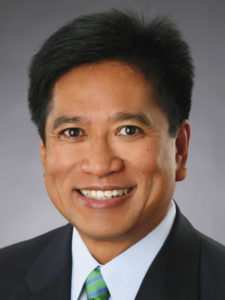 Alfredo G. Evangelista used to trick-or-treat for UNICEF. He is a graduate of Maui High School (1976), the University of Southern California (1980), and the University of California at Los Angeles School of Law (1983). He is a sole practitioner at Law Offices of Alfredo Evangelista, A Limited Liability Law Company, concentrating in estate planning, business start-up and consultation, non-profit corporations, and litigation. He has been practicing law for 36 years (since 1983) and returned home in 2010 to be with his family and to marry his high school sweetheart, the former Basilia Tumacder Idica.