Kumusta po? (How are you?). Do you remember what the word Nanang means? Nanang is the word for mother in Ilokano. In fact, you can use it for more variations, like a h&#257;nai mother; even my grandmother prefers to be called Nanang or Nana rather than Lola since calling her Nanang makes her feel younger.

Do you remember how the story of Michael and Angel left off? Let’s take a look. 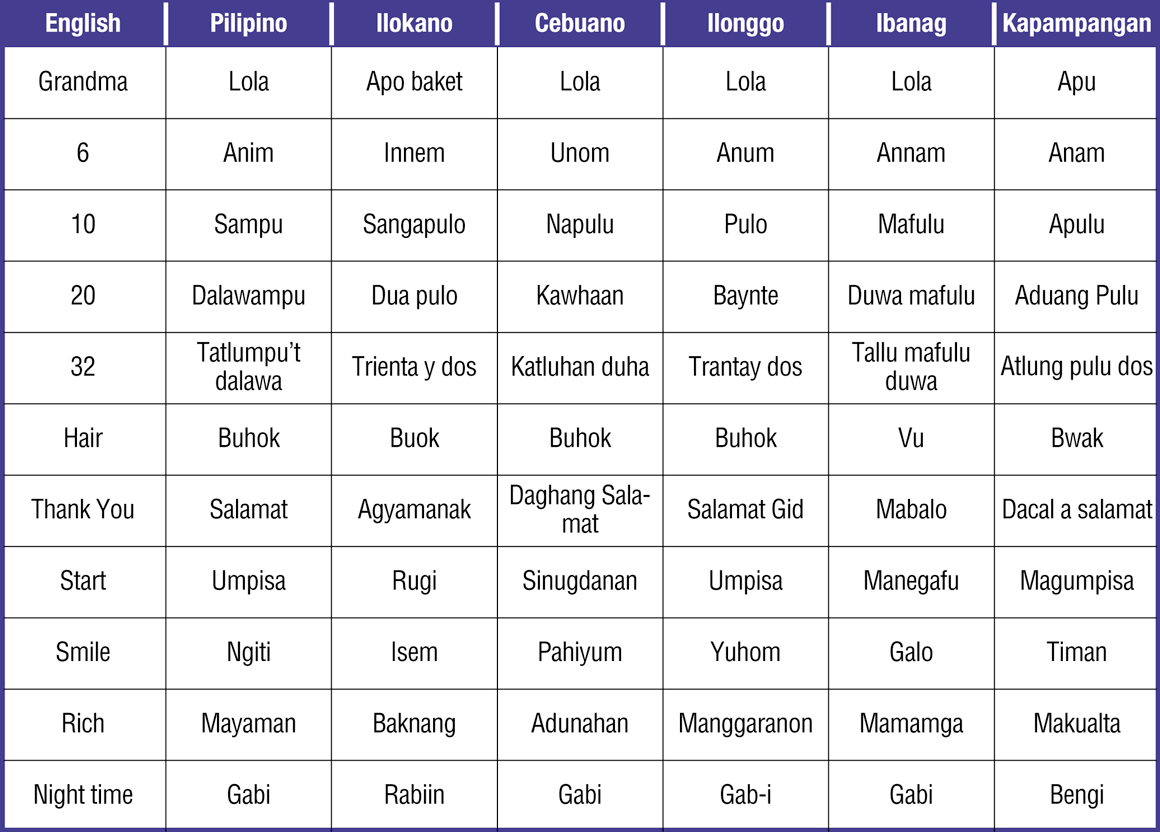 Michael is barely religious. It has been maybe 10 years since he last went to church, and he was even sleeping during mass too. He has never even heard of a lualo (prayer) before but is quickly pushed to the front by Rosie.

Soaked, with grass in his silky buhok (hair), and beinte (20) or more Lolas staring at him, Michael looks down at his rosary.

Rosie mutters “Palito, umpisahan mo na.” (Palito, start it now.)
Michael: (Stuttering) “Th Th Thank you Lord for gathering us together to celebrate, I mean mourn the death of… of… “

At this moment Angel steps next to Michael, and takes over the prayer.
“The third Joyful Mystery….”

A few minutes later, Michael steps into the kitchen breathing heavily.
Angel: Michael, are you okay?

Michael: “Yeah, I just get really nervous when I’m speaking in front of people.”
Angel gave a sweet isem (smile) and says, “Salamat. At least you tried. Actually I was going to do the Lualo (prayer) anyways but you volunteered. That’s what I was writing at the bar. I was looking for a place to sit down while waiting for Rosie to come get me.”

Michael: “Well, I was probably horrible.” 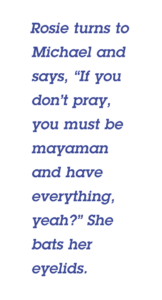 Rosie walks in. “No, it was horrible. Do you not pray the Rosary?” Rosie turns to Michael, smiles and says, “If you don’t pray, you must be mayaman and have everything yeah?” She bats her eyelids.

The three poke their heads out the kitchen door into the chanting prayers.
Angel: “Let’s go sit, there is space next to Lola.”

Thirty-Two minutes pass and Michael looks at his phone. With a surprised look on his face, he turns to Angel.

“I am so sorry but I have to go. Gabi na. (It’s night time).” Michael searches for his phone and his keys and rushes out the door.

Angel watches him leave and on the ground where he was sitting lies a business card and it reads; “Michael Dimatibag Walker, Walker Immigration Law Office – Maui, 707 Mauka Road, Waihe‘e, HI 96793.”

Angel looks up and she sees Michael greet one of the Apo Baket (Grandma) who just came in then he jogs to his kotse (car) and drives off.

Michael: “It’s Gramma Ina, she called me three times and now she won’t answer.”
Mom: “Go check on her and we will see you there.”

Michael slams the brakes at his grandma’s house, and enters using the key he kept under a rock since he was anim (6) years old.

He opens the door, and Gramma Ina is there sitting on the recliner in her usual place.

Michael: “Grams! Are you okay? You called me and I was so worried!”
Grandma: “I can’t find the remote. Can you help me find it?”

What a night Michael is having! There are so many ways to call your grandmother. Grandmother, Granny, Grandma, Mama, Lola, Nanang, Nanay, Apo Baket, Lola Baket, Lola Ina, Gramma Ina are all ways I can think of calling a grandma. What do you call your grandmother? Post it on our facebook page at www.facebook.com/FilAmVoiceMaui/. Your homework this month is to call your grandma using one of the examples I gave you. I used to call my maternal grandma Lola while I called my paternal grandma Nana. I miss them both and I wish I spent more time with them. If your grandparents are still around, lucky you! Spend time with them and listen to their stories. You will learn a lot especially about our culture and their interesting life. You might also hear some of the familiar words that I am teaching you and that might help you to master your Filipino languages. Like always, let’s laugh, let’s listen, and Let’s Talk Pinoy! Hanggang sa muli! (Until next time!) Ingat! (Take care!)