What was on your menu this New Year’s Eve? Did you have pork for progress, fish for abundance and noodles for wealth? How about a ring-shape cake for a circle of luck or black-eyed peas or green leafy vegetables for good luck? Did you do any of the traditions like wearing polka dots, having coins in your pockets or jumping at the stroke of midnight? What were your twelve fruits in your baskets? Anyways, whatever you had at the table and what you did, I hope it will bring you good fortune or good luck this New Year. 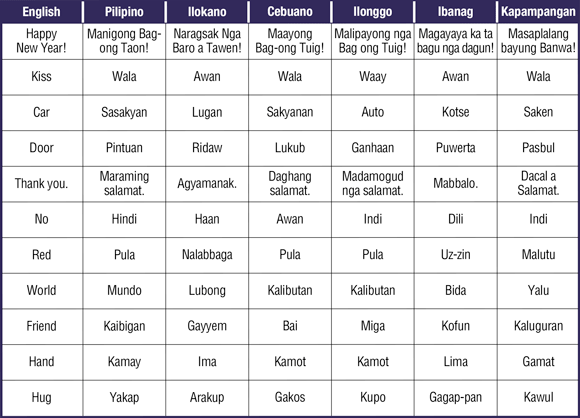 As they sit there together in agonizing pain, Katherine grabs Ray’s nawong (face) and says “A- -  hole that really hurt” and she lunges into him and they both fall to the floor. She shoves her elbow into his throat. But he doesn’t care. He is so overcome with happiness in his korason (heart) that he just pulls her in close and kawul (hugs) her, almost crushing her as well.

She knees him again in the groin and he lets her go. She lays face to face with him and says, “Don’t mess with me Ray.” As they look at each other, she anggo (kisses) him. And he halik (kisses) her back.

For 25 years Ray was in love with this woman. Twenty-five years of thumb wars and side tackles. Endless phone calls and messages throughout the day. They went through so many bad moments. Like the time Katherine broke her arm at the Ice Palace on O‘ahu and Ray came over every single day to take care of her. Like the time Ray sobbed over his frustration for being suspended from the football team due to his bad grades. Katherine would come over and tutor him, even late into the night. The night before his final, they fell asleep in the living room with books all over the floor. Like the time Katherine’s high school boyfriend was caught cheating and Ray went to “see him after school.” Like the time that Ray’s prom date ghosted him at the last minute and Katherine who decided not to go because she hates these types of gatherings, got dolled up and showed up at his door as his replacement date. Birthdays, weddings, close called pregnancy tests, injuries, all the crying and hardship they shared with each other as best friends, came down to this moment with a ummo (kiss). Could they ever go back to being kaibigan (friends)? Would this turn into something special?

Suddenly all of Ray’s worries melt away and he yakap (hugs) her and paghalok (kisses) her with 25 years of love. They just lay there looking at each other with utter shock as Katherine gently places her kamay (hand) on Ray’s cheek. “Don’t worry. It’s going to be okay,” she whispers as she had done thousands of times before. He looks at her and grins. “Yeah? Why?” he whispers back as he had done a thousand times before. She laughs and says what she always says, “because I’m here.”

Ray and Katherine get up off the floor.

“Did you know how I felt about you all these years?” Ray whispers.

“Of course I did,” Kathrine replies. “I always knew but you never made the effort to claim me. I was always yours.”

Ray is completely baffled, which turns into sadness, which turns into happiness. He feels every feeling you could feel in that moment, it happens to him. “I never wanted to damage our friendship,” he explains. “You mean the kalibutan (world) to me and I wanted you in my life forever, even if it would be just as kaluguran (friends).”

Katherine begins to sob. “Nobody could ever replace you. I would stand by your side until the last days of my life. You just didn’t know it,” Katherine whimpers.

They hurriedly wipe their tears and begin to fix themselves. The knocking continues. “Hold on a second,” Ray shouts. “Come back later, I’m in a meeting.”

The knocking stops and they can hear footsteps walking away.

“What’s the plan Ray?” Katherine asks. “You could just tell the Chief that you can’t do this case because your nephew is involved.”

“Hindi (No). Then he would assign the project to someone else and I would have awan (no) power whatsoever,” Ray answers.

Ray searches his pockets and looks for his phone. Beginning to panic, he continues to look in the same places. Walking back and forth, he starts to look stressed and agitated. Suddenly Katherine ejects the device out of her bag.

“You looking for this?” she grins.

“What? Where did you? When did you? How did you?” Ray stumbles on his words.

“You, dingdong, you dropped it while speed walking here. So I followed you to return it but actually I got more than I was looking for,” as she smirks and Ray begins to turn pula (red).

“Why are you turning uz-zin (red)?

He takes his phone. “Madamogud nga salamat! (Thank you). I know you always have my back,” he remarks as he dials Michael’s number.

In the meantime … Michael is concentrating on his driving. He looks straight at the road. He is scared to look at Angel. As he makes a right turn on a corner, he gets a glimpse of Angel’s mukha (face); he can’t help it. She looks worried yet she still has that angelic nawong (face). Her eyes are closed as if she is saying a dasal (prayer).

They are almost to the street of his kaibigan (friend’s) bale (house) when he notices a saken (car) following them. He doesn’t recognize the sasakyan (car).

“Who is behind us? Who could be following us?” Michael exclaims.

Angel opens her eyes and turns around to look at who is behind them.

“I don’t know a lot of people,” she says to him. Her kasingkasing (heart) starts beating faster. She starts to get worried.

“I will just turn around and mislead him in town. Are you hungry?” Michael asks her.

“My korason (heart) is beating so fast and all you ask is if I’m hungry? I’m almost going to have a heart attack here. Where are we going? Nanoyin (What) are you planning?” Angel asks worriedly.

“It better be good,” says Angel with a series of emotions.

Michael continues to drive and it gets silent in the car. The next half an hour is just driving and silence.

Michael pulls into a dirt road with overgrown grass. He goes outside to open the gate. “This is actually a friend’s get away house. It’s actually pretty remote and off grid,” he excitedly tells Angel until he realizes she is sleeping. They need a place no one can get to. He locks the gate and proceeds down a gravel dirt road. From there he parks on the grassy area.

He wakes up Angel. “Wake up babe,” smiling as he says it.

Angel pops open her eyes quickly because she hadn’t really been sleeping. She gets up. “Were you sleeping?” he asks. “Of course!” She turns her head. “Where are we, Michael?”

What now? What is Michael’s plan? What is there for Michael and Angel?