Ah February, the love month! Roses are red, violets are blue, I’m terrible at poems and maybe you are too! What are you doing different this Valentine’s Day? A candlelight dinner at the beach while watching the sunset? Picnic at the park? Whatever your plans, don’t forget to get a flower for your Valentine. It will surely brighten up her day or even bring a smile to her face.
Last time in our story, Michael unintentionally bought Angel a thoughtful gift. Let see what happens next. 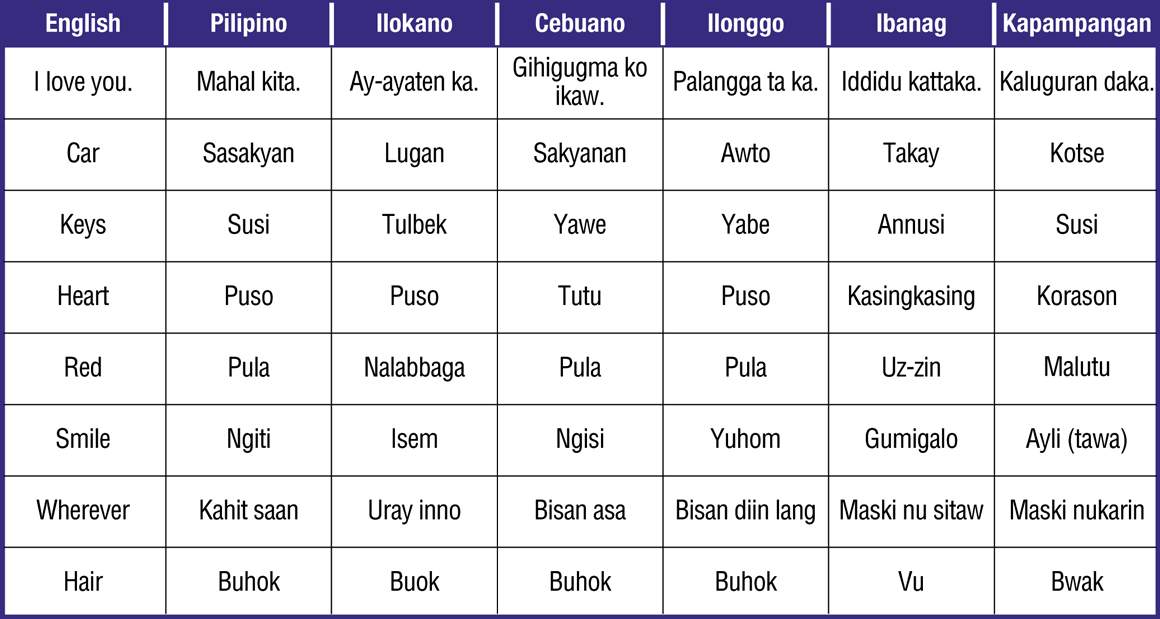 Rosie blurts out “Michael said he remembered you saying something kagabi (last night) about losing your favorite malutu (red) lipstick and that you couldn’t afford a bayu (new) one right now, so he wanted to give this to you.”
Michael turns to Rosie in horror.

Angel: “I thought you weren’t paying attention to anything I was saying. It felt like you were just staring me. But now I know…”

Michael, completely malutu (red) in the face while Angel grips on to him, sobbing. “Oh, no I wasn’t staring, I mean, I was only looking at your face, the nice side, …no, they are both nice… yes… your face is nice. Um…”

Angel: “Hahaha. You make me laugh. I’ve had such a bad day, and I know, I’m so lame! But this gift is so nice! Maraming salamat (Thank you) Michael! Agyamanak (Thank you).”

Rosie bumps her way past Michael and puts her arm around Angel and walks her to the sasakyan (car). “Oh, come on weirdos, let’s go holoholo in Michael’s fancy lugan (car)!”

Michael tries to run to the passenger side of the kotse (car), only to crash straight into his own fender, and fumble his tulbek (keys).
With his eyes tearing, the two women look at each other and laugh as they swiftly move into the sakyanan (car).

Michael jumps in and fires up his 2017 Chevy Camaro Convertible. He smiles, turns to the girls and asks, “So, where are we going?”

Angel with a smirk replies, “Kahit saan (Wherever) the road takes us!”
Michael grinning, “I have a few ideas.”

“Right! But first!” Rosie reaches over Angel and hits a few buttons. The roof opens and tucks away in the back. “Oooo!” the two women giggle, and Bruno Mars surges through the speakers.

Vrrrrrooooooom, a few right turns, and Michael navigates through Dairy Road then opens the throttle onto Kuihelani Highway. He looks toward Angel who, again is sitting next to him in the passenger seat. She is laughing, singing, and shouting with the wind tossing her bwak (hair) everywhere while she struggles to manage it.


She is wearing a black sweater over a tastefully cleavage-revealing dress covered with pula (red) hibiscus print. She has a youthful yet mature look today. As his eyes drape lower, he can’t help but notice her shiny nicely shaven legs crossed and her body hugging dress revealing most of her backside curves. She is clearly in great shape.

When his eyes return from their trip back to sea level, dreadfully, she is there to greet him eye to eye, witnessing him obviously checking her out and he painfully looks away. When he goes back for a second look, astonishingly, she is still gazing at him. She smirks and then winks. It was here, at this moment, that the earth stopped spinning, time slowed and stopped for split-second. And just like a polaroid camera, a shutter sounds, and in this ripple in time, this perfect photo of Angel, in all her beauty, winking right at him, had been captured in his korason (heart) and mind forever.

They pull into the parking lot of the M&#257;‘alaea Ocean Center and hurriedly walked past the shops towards the last building. “I know this great restaurant. I’m friends with the owner.” When they reach the front door, Michael asks the hostess, “Hi, it’s me, Michael. Is Tante here?”

Wow, wow, carabao! What is going on here? Has this ever happened to you? Have you ever had a moment where time slows for you too? A moment where you can recall so crisp and clear like it was yesterday? Tell us your story at www.facebook.com/letstalkpinoy, we would love to hear it! Here is your homework. Since it’s the love month, say “I love you” to 15 people today and make it a new social trend!

Anyways that’s all I have. Keep an eye out for my article every issue. I’m Dulce, helping you to master your Filipino languages. Like always, let’s laugh, let’s listen, and Let’s Talk Pinoy! Hanggang sa muli! (Until next time!) Ingat! (Take care!).