It gives me great pleasure to introduce Deacon Keith Cabiles, son of Carlito and Gloria Cabiles from Narvacan, Ilocos Sur, Philippines. Deacon Keith was ordained in 2015 as a Deacon for the Roman Catholic Church in Hawai‘i and assigned to his home parish at St. Anthony Church in Kalihi, O‘ahu. He was assigned in 2016 to St. Augustine Church in Waikīkī where he continues to serve.

In 2019, Deacon Keith was appointed by Bishop Larry Silva as Chancellor for the Roman Catholic Church of the Diocese of Honolulu. A Chancellor oversees the reporting requirements of the Diocese: October count of all parishes in the state, the Official Catholic Directory, and annual reports, Second collections for all parishes, Sacramental records of all parishes, and the Diocesan archives are maintained by his office. He and his wife Hazell were also appointed by Bishop Larry as Co-Directors for the Permanent Diaconate Formation Core Team.

After just a brief time of being ordained, Deacon Keith has great responsibilities God has called him to do. It is with great honor, I present my brother Deacon Keith Cabiles’ story.

For some, a vocation is sudden, profound and unmistakable. For others, it’s something which happens over time, with prayer and deep reflection. In 2008, Keith and his wife Hazell had started a family; their daughter was a year old. At the time, Keith worked as a graphic designer and Hazell, with a degree in early childhood education, was a preschool teacher.

All his life, Cabiles attended St. Anthony Church in Kalihi on O‘ahu, considering it his home parish. He greatly revered the deacon at St. Anthony, a man named George Thorp. “Deacon George was always a mentor of mine and I respected him so much in his roles of deacon, husband, father and businessman,” says Cabiles. “I remember sitting in the pews one Sunday, thinking ‘I’d like to be just like him!’ ” That Sunday morning, a curious thing happened during announcements. “Deacon George—who, with his white hair and beard, always reminded me of an Old Testament prophet—announced a new class of deacons was starting up,” Cabiles recounts, smiling. “I took it as a sign and simply followed where the Holy Spirit led me and my wife. We’ve taken it one day at a time, through the application process, through five years of formation and through this very day.”

Born in Honolulu, Cabiles’ earliest memory still makes him chuckle. “I remember blowing out the candles at St. Anthony,” he confesses. “Oops!” He credits his grandmother Andrea Cabasag Cabiles and grandfather Tereso Domingo Cabiles, originally from Narvacan, Ilocos Sur, for planting the first seeds of faith in his heart. The fortitude of the men in his family also inspired him. “I think the work ethic of the Ilocano people is really admirable,” Cabiles says. “I saw it in my grandfather and my dad Carlito, who were amazing providers. They embodied the nobleness of hard work and understood it took industry and sacrifice to flourish.” And from his mother Gloria, whose family is from Cavite, Cabiles says he was shown the embodiment of generosity.

An alum of Damien Memorial High School, Cabiles recently graduated magna cum laude with a B.A. in Religious Studies from Chaminade University. Now employed as the Chancellor of the Diocese of Honolulu, his responsibilities are vast and varied. As Chancellor, Cabiles serves as chief notary, record keeper and archivist of the Diocese. He is Liaison for the Diocese’s new columbaria/cemetery services, Chair of the COVID-19 Task force and recently named Co-Associate Director for Permanent Deacon Formation. He sits on the Bishop’s Administrative Advisory Council, Priest Retirement Committee and Campaign for Human Development Committee. He is a member of the Roman Catholic Church in the State of Hawai‘i Corporation and serves as the respondent advocate in the Tribunal Office.

At the parish level, Cabiles is involved in Baptism Preparation and enjoys activities related to Adult Faith Formation and feeding the hungry once a week in Waikīkī. He presides over Communion services on Mondays at St. Augustine and on Fridays at Blessed Sacrament in Pauoa.

As the father of Kacie, 13, and Hailey, 11, Cabiles finds his days are generally packed full. “Between raising a family, work, ministry, extended ‘ohana and friends and finishing up a graduate degree, life can be absolutely overwhelming,” he acknowledges. “In the call to be a Deacon, God pours on the necessary charisms to help the journey—even if it’s simply the gift of being okay with four hours of sleep!”

The Deacon, Cabiles reminds us, is an icon of Christ the Servant. “Serving the Church is what we are called to do. For me personally, I must constantly remind myself service doesn’t mean only doing what I want to do nor is service something only done if I have the time. There’s a level of sacrifice explicit in the call to be a cleric. And I accept this as a reality, keeping faith I will be able to accomplish His will.”

Cabiles finds his greatest motivation comes from his gratitude for God and all his blessings, even during hardship. “I am grateful for my amazing wife, my daughters, family and friends; beautiful church communities; a fulfilling ministry; and for a God that surrounds me with so much love and joy,” he says simply. Early on, his mentor blessed him with some profound and loving advice which served him well. “Deacon George suggested I immediately look for the good in everyone I encounter,” Cabiles recalls. “Focusing on someone’s goodness will allow you to be a better servant. That’s what being a Deacon is all about.”

Thank you Deacon Keith for sharing your story. This is certainly a message to our young men and women in our church to look and experience the Holy Spirit with interest on how God can make a difference in their lives. Deacon Keith you are truly gifted to give, your life and faith, and a witness to Jesus, for the ‘ohana in Christ.

May God continue to bless you in your endeavors! Jesus, I trust in You! 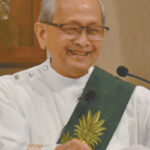